The Merit of Standardized Tests 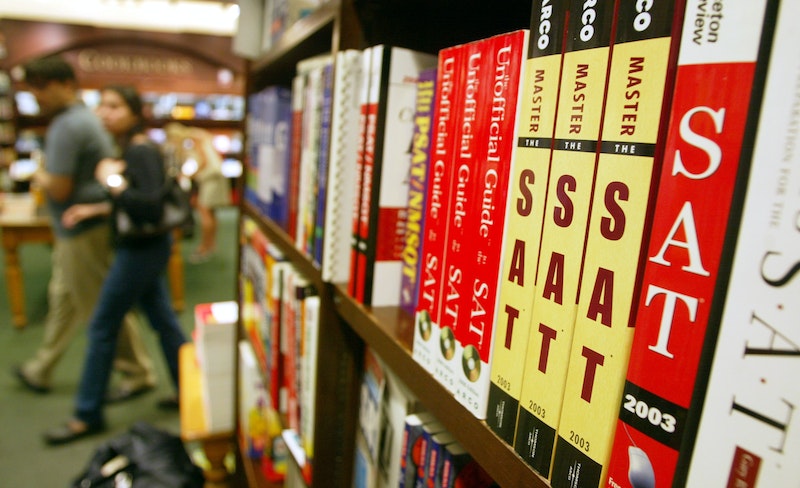 New York University, my alma mater, was the “safe school” when I applied there in the early-1980s. It’s now reportedly one of the 50 hardest colleges in the country to get into, but back then NYU’s standing was more modest. I recall it carrying a label in a guidebook of “very” competitive,” not “highly” or “most” competitive. But I could be confident of getting in, mainly because my SAT scores were far higher than the average among NYU applicants.

My grades, from a public high school in Queens, were mixed: excellent in subjects I liked; mediocre in ones I didn’t. It was a long shot that I’d get into an Ivy League school, though I applied to several. My brother Mark, three years older to the day, was an excellent student who’d gotten into Harvard, aided by his witty application essay, titled “Lies My Elders Told Me,” and a personality more outgoing than mine. I’d shown some writing talent, including on the high school newspaper, but my essay must’ve been uninspired, as I don’t remember it.

I took the SAT twice. I believe my high scores were 730 verbal and 630 math, the former putting me in the 99th percentile and the latter somewhere in the 90s. Rummaging through papers from our late mother’s apartment, I find records of my brother’s SATs, but not of my own, a possible reflection on my organizational habits at the time. For his part, Mark recalls a Harvard admissions officer indicating that it was, above all else, the funny essay that got him in.

Harvard just announced it won’t require SATs on applications over the next four years, and that applicants who don’t supply test scores won’t harm their chances. This is part of a broad trend of colleges pulling away from reliance on standardized tests in admissions. The pandemic helped drive that trend, by making it harder to conduct on-site testing. Moreover, testing has become a political lightning rod, amid claims the tests are racially or culturally biased, or entrench privileges of the wealthy who can afford elaborate test prep. And Harvard, in particular, has been defending against a lawsuit by Asian-Americans claiming they were discriminated against despite high test scores, a case that may go to the Supreme Court.

The backlash against standardized testing is part of the current cultural moment of outrage and panic at anything that’s construed as “privilege” and “inequity.” Tossing out tests at elite admissions offices is going to do damage that should be weighed against any worries about overreliance on testing. There are students—I was one of them—whose potential is not well-gauged by how well they’ve done in their classroom work or extracurricular activities. Tests can be a way to spot underdeveloped talent—including among underprivileged kids who haven’t managed to transcend their circumstances with a well-rounded resume of early achievements.

My wife, seeing me delve through old academic papers, points out that, as a student, she wasn’t a good test-taker or essay-writer; that she got into Syracuse University through hard work that made up for those relative limitations. That’s how the system should operate—that people can get into selective schools in various ways, reflecting diverse talents and emphases.

In the early-2000s, I made a hobby of trying to get onto game shows. I never succeeded. I took the test for Jeopardy! a couple of times, and felt I came close to passing (they didn’t reveal your score). It was a hard test: 50 written questions on any number of subjects, timed. In preparing, I learned that you should bone up on Canadian trivia, as the test questions reflected that Canadian-born host Alex Trebek disliked American contestants’ ignorance about Canada. As it happened, I was tripped up by not knowing about the Bay of Fundy’s high tides, and that a “French-Canadian chanteuse” would be Céline Dion.

I got advice from one of my brother’s Harvard buddies, who’d been a champion on the show. It took chutzpah for me to request this help, since the man was a federal prosecutor in the middle of a high-profile terrorism trial, but he returned my call. If I got past the 50-question test, he noted, the next step would be a mock version of the show, so I should practice buzzing in by using a TV remote control to pause the show’s video as Trebek got to each final syllable. Excellent advice I never got to use, and my interlocutor returned to trying Timothy McVeigh.

Another ambition was getting on Who Wants to Be a Millionaire. While I went in person a couple of times, most of the applications were by phone; you’d answer questions on the keypad, and if you got them right, your name went in a random drawing. I was good at the questions, but never got past the drawing. At some point, a concern became public that too many of the contestants were white thirtysomething males (I was in that demographic). The selection process then changed, with applicants interviewed to increase the producers’ discretion as to who made the cut. I was interviewed once, but I never got a callback.

I don’t know why thirtysomething white males were disproportionately represented in the phone testing. In my case, it had to do with being underemployed and prone to make the calls. Broadening the process to get a wider range of people on the show wasn’t bad, but there should’ve still be an avenue for people who knew a lot of trivia and could answer questions about it fast and under pressure. Who Wants to Be a Millionaire may have been ahead of its time in jumping on an anti-testing bandwagon that narrows paths to success.