I went to Emerson College and learned nothing. 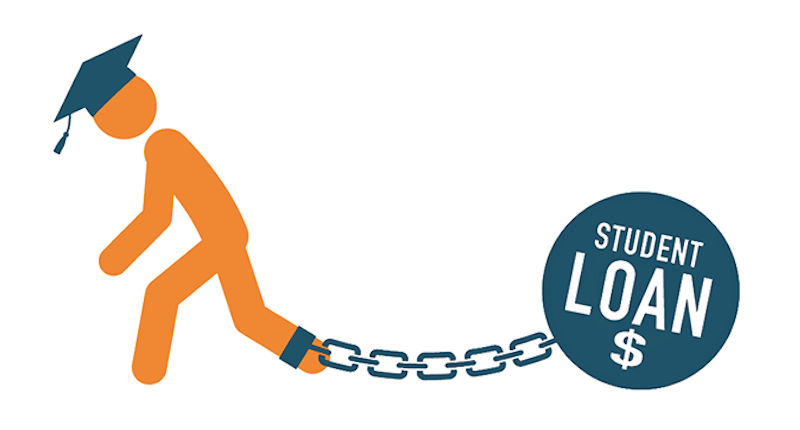 Americans carry nearly $2 trillion in student loan debt, and there’s debate over whether the federal government should forgive it. But it wouldn’t fix the long-term problem: a higher education system that deserves massive reform.

It’s asinine that we live in a society where one can take out $200,000 or more in student loans. Most people start college at 18. Many have never worked a job or have limited formal work experience. They can’t get a loan like that to start a business or buy a house. Yet, they can get one for higher education with no guarantee of a degree, a job, or a decent salary.

Colleges are far too expensive and take too long to complete. Some colleges cost more than $75,000 per year. And mediocre private colleges and state schools charge $50,000, $60,000, $70,000. A gamble on a college degree should have a big return on investment. Most people in America don’t have a degree and most with a college degree don’t use it in their field of employment. I work in journalism without a journalism degree; the year I spent at Emerson College was wasted. I learned nothing. Meanwhile, there are Emerson College graduates that work at Starbucks and mow lawns for a living. I respect those professions, but one can do them without an expensive piece of paper. Ideally, society would limit the scope of who attends college. It can help some people get into some professions.

State schools are good, and so are elite private institutions. But do we need an abundance of mid-wit institutions so people can enjoy the so-called college experience? I don’t think so. If one chooses to be in a fraternity/sorority, party, do drugs, have sex with strangers, study abroad, play sports, and not focus on improving themselves and their chances of working in their respective field, that seems more like a them problem than it is a me problem. However, we should empathize because that doesn’t describe everyone struggling with student loan debt. Student loan debts are a big bill and the cost of living is absurd in many parts of the country and getting worse. It's rational for someone who has a student loan bill to want that bill to disappear.

I’m not opposed to some level of debt forgiveness in exchange for massive reforms to the system. Allowing people to discharge student loan debt via bankruptcy could encourage more responsible lending. And lower interest rates could make paying back loans easier; usury harms working people. Plus, states shouldn't revoke occupational licensing for those who default on loans. Making it harder for one to work makes it harder for them to pay off their debt.

Maybe we should get a checkoff box on tax returns asking people if they want to donate to student debt relief. If people want to help others pay off their student loans, they can do so voluntarily.

Republicans often talk about getting the government out of the loan industry to solve this problem, but I don’t see it. Donald Trump had four years to act on that, and he didn’t. And under George W. Bush, the government enacted bankruptcy reform preventing students from discharging private student loans via bankruptcy—which made the student loan problem worse; Joe Biden supported this law.

What’s needed is the downsizing of existing state colleges. Make them places that educate people on how to get a job without frills—like bloated administrative staffs and extracurriculars that make school more expensive. Two UMass schools combined lose more than $50 million per year on athletics, so places to make cuts exist. Three-year bachelor's degrees and three-semester associate's degrees should be an option at every state college in America.

Public colleges should prioritize degrees with good to great returns on investment. It’s an oversimplification of the student debt problem to say “You shouldn’t’ve majored in gender studies” when almost no one majors in gender studies. But we should admit some degrees are worth more than others even if the school charges the same for them.

MIT puts a lot of its courses on YouTube for anyone to watch. Why can’t a public college do the same thing and have an online portal for people to submit some assignments? Free community college isn’t a bad idea either. It would help lower-income people, and in my state, a minuscule endowment tax of a fraction of one percent on Harvard and MIT could pay that $250 million per year bill—which would cost even less if schools cut bloat.

Additionally, it should be standard for high schoolers to earn associate degrees at 18 years old. One of the graduation requirements for Massachusetts high schoolers is the MCAS. I took the science test as a freshman and the math and English tests as a sophomore. I got advanced on all of them. If one can show the state some form of competence at a young age, they shouldn't have to fill their high school credits schedule with useless classes to check some boxes—especially when you've met the minimum requirements for many different fields of classes to graduate.

Degree or not, society is better off without credentialism. Employers should base hiring decisions on skill, not degrees or patronage. The government—federal, state, and local—should amend policies to hire based on skill rather than a piece of paper or how hard you shill for a politician (and how much you donate).

The government also must eliminate many education requirements to work some jobs to combat that credentialism. Occupational licensing often has onerous education requirements like 1000 hours of schooling to become a barber/cosmetologist or requiring a college degree to be a substitute teacher. Even trade schools often cost more than $10,000 and sometimes the outcome is a job that doesn’t pay much more than minimum wage.

I hope the private sector would follow the trend and value skills over degrees. Some private-sector employers have dropped degree requirements to diversify their workforces. I don’t think in those terms, but dropping degree requirements is smart. IQ tests in hiring are illegal because, in some instances, that could help avoid some of this mess. We shouldn't strive for an IQ-based society either because that involves discrimination against something genetic. But higher education is broken and needs to be addressed immediately.