Because I’m coming out. 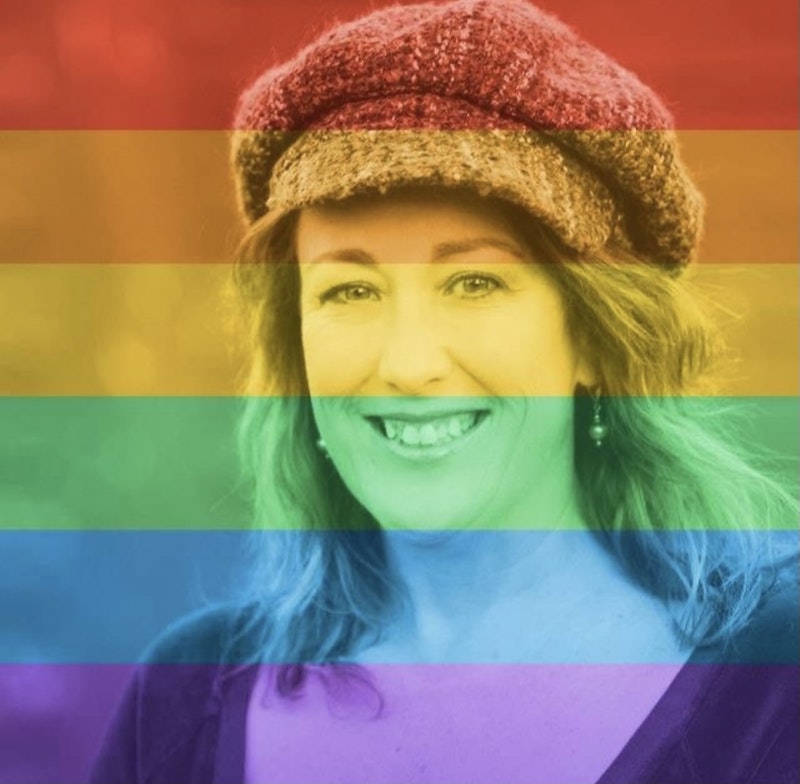 How do you “come out” at age 53 as a married mother of four? I didn’t invent the concept and am not making an effort to perfect it, but remain uncertain exactly how to go about it. I’ll just do my best to tell the story.

Last Thanksgiving I told my husband and (one at a time) each of my four children that I’m not straight. That’s how I was and am willing to phrase my newly-embraced sexual orientation, since I’m rejecting labels. In Schitt’s Creek, David Rose says he likes the wine, not the label and I concur that labels are better for wine than people, but wine gives me migraines, so make mine bourbon. I don’t want to attach one label to myself, especially since I’ve seen bickering between groups—to me one marginalized group making judgments on another isn’t cool. I don’t need a label. The only people I will ever judge is those who have the audacity to judge others.

My family took the news that mom “isn’t straight” well. My three grown young women seemed to have about the casual yawn-ish “Is the sky also coming out as blue today?” reaction I’d expect from people who were raised to bring home every queer theater/band kid in a 60-mile radius who couldn’t come out to their redneck Trumper parents in our rural community. Show tunes were on repeat, musicals or campy scary movies on TV, and I was the mom who picked them up on prom night and tossed bags of microwave popcorn to the backseat of the car at three a.m. when they were all sky high. I did it all wearing flannel and baseball caps for those who want to say we knew. My nearly-17-year-old son more or less shrugged and mumbled “cool bruh” and turned the music back up in the car.

My husband has been amazing. He's been my best friend since 1985 back when we started going to proms together. He couldn’t be more accepting, loving and understanding. Don’t ask me what’s “going to happen with us.” I don’t know. I already have a separate cottage on an island. I go back home for baseball games, we talk every day, I still love him and always will. Beyond that, what happens is between us is private.

I’ve been asked in a small circle whether I knew, or when did I know, or the other person wants to tell me they knew because they have gay Broadway musical cast of Scooby Doo/Nancy Drew/Hardy Boys level gaydar. I really didn’t know. Or did I? What should’ve been my clue? The women who hit on me over the years while I explained to them that I was straight? Memorably, one of them said to me “You should explore a different side of yourself,” and she died tragically soon after, and I wish she was here to see how right she was.

Ten years ago my husband and I were separated for a bit, and I had an encounter with a woman that I haven't been able to forget. As I look back, I think about things like was that a CRUSH I had on the one girl in high school, in college… ohhhh.  In the 1980s I didn’t really know girls who were dating each other. There wasn’t a checkbox on that form we filled out that predicted our careers. It didn’t ask, “Do you currently have a smoking hot poster of Laura Branigan wearing black leather pants on your bedroom wall?” “Did you also go to see her twice in concert?” “Who does that?” Bonus points: “What about that one field hockey player?”

Anyway, fast-forward past a 30-year marriage and four kids, one of whom is married now with another on the way to her wedding. Wouldn’t it just have been easier to stay in the closet like probably half the population does? Coming out opens me up to judgment on many levels, right? People live to judge others. Especially the Jesus freaks. They sit in church and listen to a Bible that says “Judge not lest ye be judged” but they're the first ones to judge others like it’s a highly paying career with fabulous benefits. Glass houses my ass.

Coming out later in life as a married mother of four and a business owner in a conservative geographical area, I really can’t care about what people think. I’ve isolated myself in a tiny cottage on a tiny island for a decade and believe me I have given this a lot of thought. It has been excruciatingly lonely at times. I’m not trying to be avictim, martyr or hero. Many more people have been through experiences with sexuality that’ve been far more tumultuous, horrific, even ended in death. Maybe it’s for them, and for all the individuals we’re surrounded by who never come out and choose misery, that I’ve chosen to live in truth instead of living the status quo. I’m not coming out because I’m in or have been in a relationship with anyone. This isn't about someone else; it’s just about me. Is that selfish?

Trying to be someone else is too exhausting—fuck the Joneses, I never could keep up with them anyway.