You Can't Ground Your Kid For Being Gay 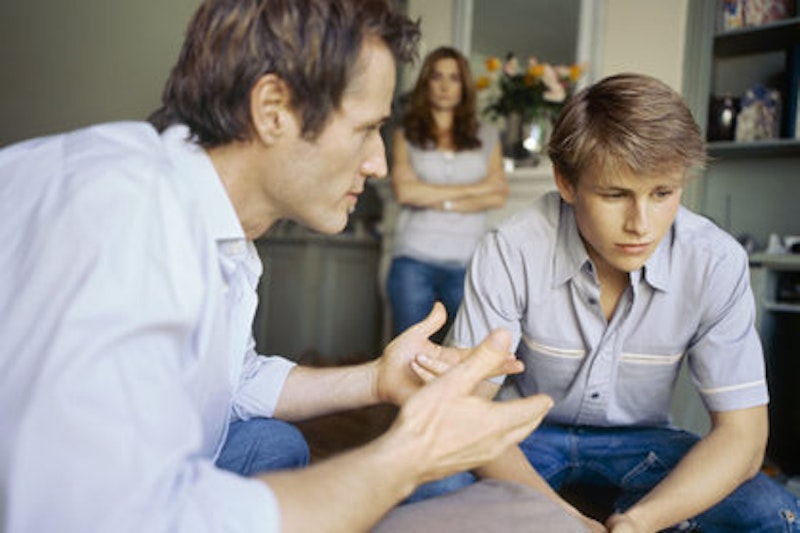 I’ve been a mother for 21 years, and have encountered many types of parents. While not a fan of the ones who are too hard on their kids, yell far too loudly at sporting events or live vicariously through kids' achievements, in reality I don't actually pass judgment on them. It can be difficult and exhausting to raise kids of any age, and we live in imperfect parental glass houses.

Regardless of the building materials of parenting homes, though, there's one exception to this goodwill policy. Parents who refuse to "let" their kids be gay deserve all the metaphorical rocks we as a society can collectively throw. How can accepting your child for who he or she is even be optional? As parents, if we don't accept our children, how would we expect them to accept themselves?

There's a young high school couple in our community, let's call them Sam and Andy. Sam got thrown out of the house because his parents, who'd previously "forbidden" the kid to be gay, found notes from Andy hidden in a backpack. Sam's father said he would rather be dead than have a gay child, and Andy was accused of "rape" by these parents. Sam moved in with a friend, forbidden from seeing Andy again. (Though the names of the couple have of course been changed, the story is true and unfortunately is not uncommon in our rural area.) Abhorrent statistic: 40% of homeless youth identify as LGBTQ and are homeless due to lack of family acceptance.

As if getting thrown out of your house isn't enough, Sam and Andy can't go to the prom together either—not as a couple anyway. Apparently those discounted tickets are only available for boy-girl couples. They could bravely, despite being forbidden from seeing each other by their parents, lie, buy single tickets pretending to go with friends, and proudly show up in front of the prom photographer as a couple despite these obstacles. I wish they would. It wouldn't be easy but it’d be courageous. Their classmates, the camo-wearing Maryland Eastern Shore conservative Republican rich rednecks, would ridicule them. Thanks to today's social media citizen journalism coverage, they wouldn't be in danger of physical harm. Why shouldn’t they remember their prom dates someday, taking out that photo to laugh at the outfits?

But their poor, embarrassed parents—that photo would never grace a mantelpiece. Signing their kid up for "pray the gay away" church camp didn't work. Written mainly as fiction by men centuries ago, the Bible means nothing to kids who are just trying to be who they are, so throwing that book around hasn’t worked either. Throwing kids out of the house, making them homeless while trying to attend high school (where of course they’re expected to continue achieving highly) didn't work. Ignoring the issue, taking phones away, saying, "it's a phase," refusing love and affection and support... none of that worked or will work and that's because it's the parents who are the problem, not the kids. Sam and Andy are simply living honestly. Everyone should have that freedom. Gayer founding fathers really would’ve come in handy when the amendments were written. Until then, states decide, and we wait for the Supreme Court.

Maybe these narrow-minded, intolerant parents are the ones who should be sent to a camp, where they're taught to love and accept their children as human beings. Parents could learn about bullying, suicide and the danger they're putting children in at school by not embracing them at home. Someone could teach them that it isn't about "accepting a lifestyle or a choice" it's just about loving your kid no matter what. You don't love your kid no matter who they are? We can judge. You're an asshole.