Chaos at Kenwood with The Rysing Suns

The larger Maryland and DC area all got a strong dose of The Rysing Suns’ high-energy blare in 1966. 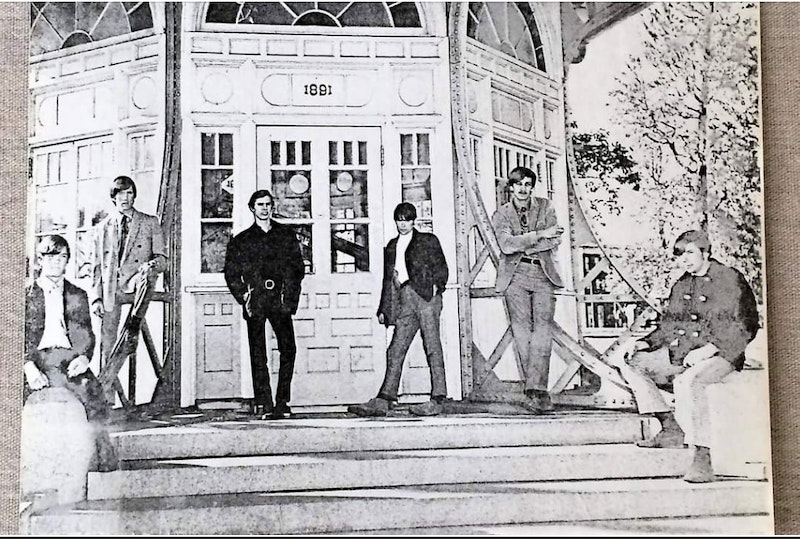 Salisbury, Westminster, Sykesville, Ocean City, and the DC area all got a strong dose of The Rysing Suns’ high-energy blare. By mid-1966 the band found success beyond their east Baltimore stronghold and with the new stomping grounds came a different lineup. Shortly after the Dome session Denny Naperalski became their sixth member. The Rosedale teen tracked the band down to offer his services after hearing his brother rave about a mind-blowing Suns performance at Mt. Carmel High School. The bassist auditioned and made a strong impact on Dave Collins and Frank Cantazeritti, inspiring the pair to become (in Collins’ words) “hard-headed as hell” about adding Naperalski’s rumbling rhythms to the mix. Inevitably the others relented, creating one of the group’s most popular iterations.

The Suns’ greatest infamy came from a concert in Overlea, MD. Their colorful mod threads and long hair, and the relentless attention they gained from girls at a Kenwood High dance sparked the ire of jealous boyfriends and macho greasers. The late-’66 gig wasn’t the first they’d played at the school, but its outcome was shocking.

Sid Kramer: “We were popular at Kenwood High because they hated us. The place would be so packed [when The Rysing Suns played]. It fit 500 people and there would be hundreds outside that couldn’t get in and they’d throw cupcakes at us… We had the same trouble at Patapsco [High School]. We took all their girls… they hated us there.”

Steve Boyle: “Dave Collins was a good impression of Mick Jagger. He could really sing well, he always got the attention of the females in the audience.”

That animal magnetism struck the wrong chord and Collins soon found himself confronted by three giant greasers, an intimidating bunch in their early-20s who were carefully snuck in through a side door. According to eyewitness accounts these guys may have been members of biker gang The Asphalt Angels, but Collins remembers them as nothing more than local bullies who went around picking fights for fun. They stood upfront against the stage which only rose a few feet off the dance floor. The band got through two of its four sets, but the third marked a breaking point. By then Collins had been clowning all night long with the trio of leather men, even jokingly giving them a tambourine to play. The tension remained. Finally the meatheads went too far: they climbed on stage in the middle of a song and got right in the singer’s face. A primal fight-or-flight reaction kicked in. Collins cold-cocked one of them and then went tumbling on to the floor in a hail of punches. From there the brawl spun out of control.

Dave Collins: “I kicked the hell outta some guy who was about twice my size… these were like really bad guys. I mean motorcycle guys, and we were like skinny rock ’n’ rollers and we beat the hell out of them.”

Steve Boyle: “People down there were wrapping belts around their hands and before we could get out of there they had Dave down and pulled him off stage.”

Frank Zak: “We were fighting on stage at Kenwood… The crowd attacked us… I remember a guy attacking Dave, and Dave hitting him with a mic stand… another guy had a belt. He took off his belt in the audience and had it wrapped around so the buckle had six or eight inches (of slack) and he swung it at Denny, and Denny put his bass guitar in front of him and the buckle hit the neck… put a big gouge in the neck.”

Sid Kramer: “Frank Zak was getting the chains off his drums (that’s what was holding his drums down) and he started swingin’ the chains… Denny hit a guy in the face with his guitar… This big ox about nine feet high went “Boom!”, hit me in the face and I fell down, that’s all I did.”

Frank Zak: “Even our parents got involved and pulled these people off.”

Sid Kramer: “We ended up having a police escort out of there. They brought dogs and everything. The police wouldn’t let us out of the building unless we were escorted with dogs.”

Instead of scarring the band with a bad rep, the incident made The Rysing Suns more popular. When they’d show up at local record hops and dances, sometimes even when the boys were just hanging out in public, strangers would approach them, asking if the stories about Kenwood were true. A Rysing Suns fan club was formed by a group of Kenwood High girls (later on some of these mega-fans would end up marrying several of the musicians). Eyebrows were raised and a hush fell whenever the hip cognoscenti at The Bluesette and other teen clubs noticed The Suns make an entrance. No longer simply “The Rolling Stones Of Dundalk,” they became the band who battled a crowd and lived to tell the tale.

A year later The Rysing Suns got booked for a return engagement at Kenwood. The whole band remembers it as the biggest local gig they ever played with overflow attendance so massive that some members of the crowd were climbing on top of the bleachers and up into the ceiling, swinging from the rafters. This time there was no bloodshed. The only violent mayhem at this show came when The Suns’ bone crunching riffs burst through the speaker cones and out into the ears of a dance-crazed throng.