Cooling Off with The Rysing Suns

“A Third Hour On Forty-Eleventh Street” was their Dome Records debut, and unfortunately, it didn't exactly burn up the pop charts. 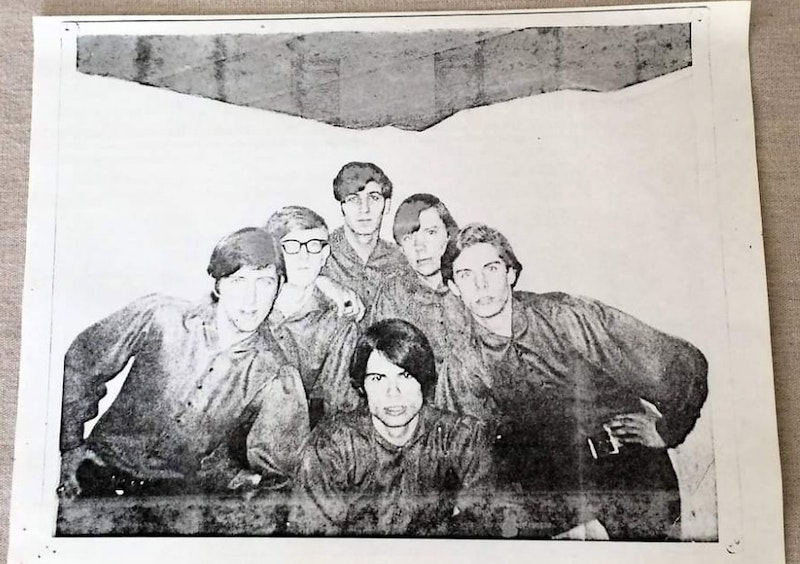 Destructive compulsion soon transformed into artistic inspiration as The Rysing Suns started winning big at local “Battle of the Bands” tournaments. From The Baltimore Civic Center to rural enclaves like Howard County’s Fort Meade, the boys were wiping the floor with their competition. Dome Records’ talent scouts served as judges at many of the band battles and The Suns’ victories led reps from the label to offer the group a modest recording contract.

Sid Kramer: “The phone rang. It was around dinnertime one day and I picked it up and this guy says, ‘We want you to be on an album’. And I said, ‘Sure! When are we supposed to do this?’ And he said, ‘Tomorrow’.”

Dome’s request came with a caveat: the band could only be recorded if they had an original song. Kramer then wrangled his bandmates together and the crew rushed to the Boyle basement where two hours found them hammering out the monstrous racket that’d be immortalized on their first record release. This was also their first original work, “A Third Hour On Forty-Eleventh Street.” The track was put to tape in early-1966 at their only Dome recording session. The song’s title references a nickname the group gave to 51st St. in Dundalk, a landmark that was prime "reaping" territory. The tune was recorded in a single take live to two-track with a writing credit given to “Harvey Linkas” even though it was actually a collective effort.

By 1966 The Suns figured out how to cram all the power, fury, and eccentricity of their serrated attack into less than three minutes. When it comes to punk rock, often less is more and “A Third Hour…” is haunted by a stark, careful kind of sonic emptiness, something that could be a subconscious nod to the cultural emptiness of a dull suburb. Places like Dundalk were designed for young families starting anew in the wake of World War II, not restless teens hungry for a taste of the rock ’n’ roll subculture that turned characters like Mick Jagger into hedonist icons. The track documents an impulsive reaction to the blandness of their surroundings. It’s more than a decade ahead of its time, sounding exactly like a no-wave record, or the late-70s works of The Fall, P.I.L., and Wire. Despite the post-Vietnam sound, there’s no influence from leftist propaganda, nihilism, or any other trendy punk stance. Boredom and an addictive adrenaline rush were all that drove this noisy basher.

“A Third Hour On Forty-Eleventh Street” opens with a duel: Steve Boyle’s airy organ and Sid Kramer’s biting riffs taunt each other until finally the other instruments pile on with reckless abandon. Frank Cantazeritti’s staccato leads rip through the vinyl with machine gun blasts of treble as Dave Collins hocks up imaginative growls describing life as a bored teen. Frank Zak’s drumming is the schizoid scene-stealer in this tense soundscape. One minute he’s on a spree of fluid free jazz rolls, the next minute he’s glued to a staid European march, the next a hail of explosive cymbals, the percussive imitation of bricks smashing a ceramic bird bath into oblivion.

Musical chaos wasn’t the only allusion to crime. The chorus’ lyric ”There’s a flashing light of a neon hue” could be a veiled reference to the police lights that hounded them through Dundalk after dark. In the verse Collins sings, ”Pass the wire, yeah give it to me,” a reference to smoking cigarettes. In 1966 it was legal for anyone 16 years or older to use tobacco products, but kids who did so were often stereotyped as hoods and troublemakers (Collins was 16 when this was written). The verse lyrics also contain the biggest red flag, Collins’ line “Everyday I am of reap!”, a poetic salute to vandalism.

“A Third Hour On Forty-Eleventh Street” didn’t burn up the pop charts. Overall, the circumstances surrounding the Dome session were low budget and unprofessional. The band had to pay for half of their recording services. The track ended up on Dome’s most well-known release, the various artists compilation Baltimore’s Teen Beat A Go Go though the record’s notoriety didn’t develop until decades later when it became a 1960s punk collector’s item and a beloved reissue release on the cult Get Hip label. The band members recalled hearing a rumor that claimed “A Third Hour…” had been played on air by a California radio station, but not much backs this up. Baltimore’s Teenbeat A Go Go did sell well enough to merit two pressings, an impressive feat by the standards of the lo-fi 60s indie scene. Regardless, the writing was on the wall: The Suns’ association with Dome Records was expendable, so instead of holding out for success in the record industry the quintet began to concentrate even harder on honing their craft as a live act.