The Lasso’s new album makes past and future dance. 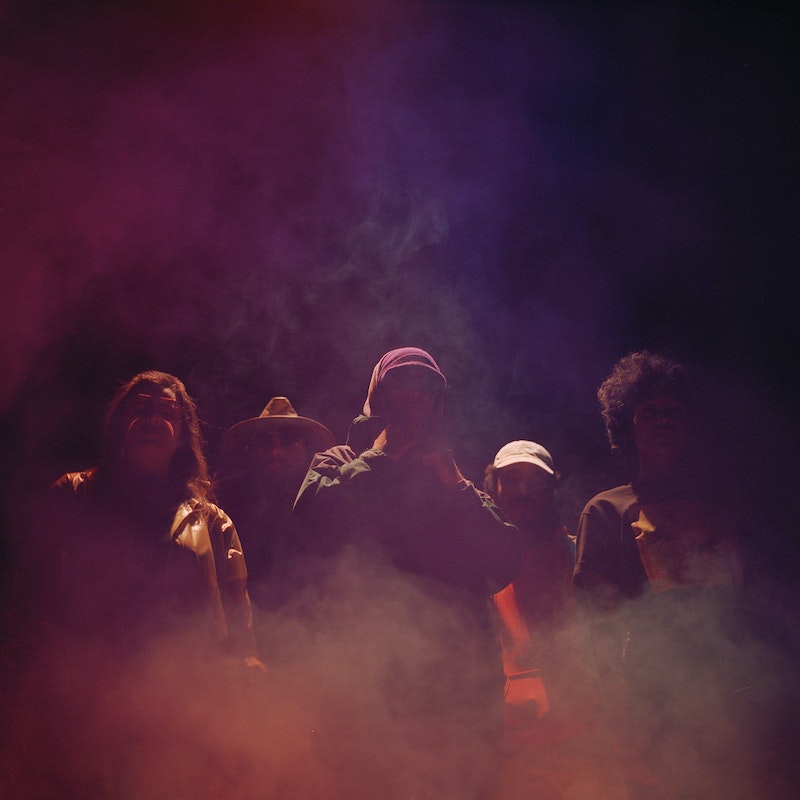 The Lasso’s new album 2121, feels like a deliberately considered act of booty-shaking defiance. The white Michigan producer and multi-instrumentalist has gathered numerous Black vocalists, rappers, performers, and fellow travelers for a foray into Afrofuturist psychodelia. The album touches on Sun Ra, Parliament, and Janelle Monae to imagine a retro tomorrow where the dance floor is lit and time boogies not to forget, but to remember and celebrate suffering overcome.

The title track is a nod to Prince’s 1999, but doesn’t hit with that single’s apocalyptic rapture. Instead, Lasso’s production is slinkier and more slippery, with Jared Selner’s sax sliding steamy seduction around burping cross-eyed space blips and Billi Free sighing, “I just want to see how deep your funk is.” It’s exuberant but also nostalgic and wistful. Even in the middle of a dream of release, the Lasso never forgets he’s in a dream, and that at some point everyone’s going to have to wake up in whatever future they’ve built.

That 2121 double vision sets the album apart from the more single-minded throw-your-hands-in-the-air disco celebration of something like Dua Lipa’s Future Shock from last year. The album’s cast of dozens is taking off on a rocket, but there’s always a recognition that no matter your speed, you can’t outrun the present. Boogie churn like “All Gone” alternates with dives into drifting can’t-feel-my-feet tripped out head-nodders, the Lasso tying it together with layers of  deep beats that loop yesterday and tomorrow together in one dark smear.

On the unsettlingly titled “Will We Be Us Again?” Deep Greasy’s bass struts and dodges while Rachele Eve breathes a hook about going nowhere and everywhere: “Don’t ride bikes/can’t fly planes/one way ticket/to the end of the days.” Sitting in one spot takes you to apocalypse on a layered magic carpet of sinuous psychedelic Eastern samples. When the manipulated robotic chorus on the woozy smooth jam “Satellite” declares “all we ever really want is someplace to call our own,” it’s a universal benediction. But it’s also a particular search for a just country on some other wavelength, where the vibes that are wrong here can finally be right.

“The Abyss” is even more explicit, as a sparse dance-floor beat provides the background for rapper Fat Tony to meditate on the way injustice is a cycle and a mire.

Ain’t shit changed at all

Ain’t the writin on the wall

Ebbs and it flows but it’s never gone.

But even as he says there’s no new future, the track goes on, adding instrumentation and that sexy sax, as Rachele Eve sings political insights like a come-on, “Now is not the time for a quick fix/we’re the architects of our bliss.” Despair and hope move up on each other under the swirling lights, and the beat is the thump of liberation, quashed, delayed, but still dancing, this year and every year. There’s a lot of great music that is embedded in its moment, and a lot of great music that goes spiraling off into utopian other worlds. But an album that does both at the same time is something else.