A Sledgehammer in the World of Music 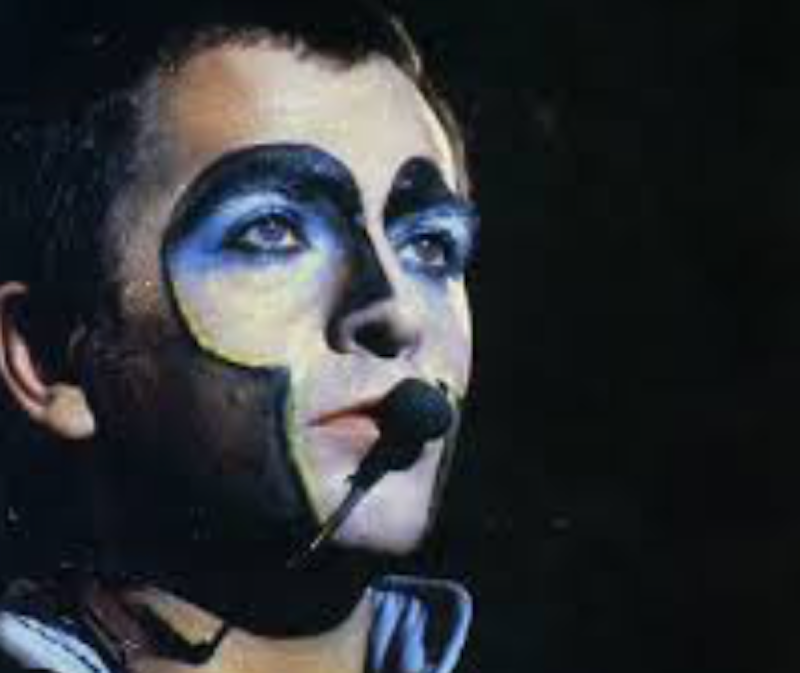 When most people think of the music of Peter Gabriel, they visualize the “Sledgehammer” music video or the scene in Say Anything when John Cusack plays “In Your Eyes” on a boom box. These two songs are among Gabriel’s biggest commercial hits but the true gems are found deeper in his catalogue.

Gabriel wrote his first song “Sammy the Slug” at age 12. His father was an electrical engineer, his mother a musician. He was raised on a farm in Coxhill, England and attended a conservative boys school outside London. There he met future bandmates Tony Banks, Chris Stewart and Mike Rutherford.

At 17, Gabriel saw Otis Redding perform at the Ram Jam Club in Brixton. The experience made him want to become a musician. His first band was called The Anon, later renamed The Garden Wall. He wanted to call the band Gabriel’s Angels but they settled on the name Genesis.

The music was complex and experimental with classical influences, multiple 12-string guitars and bizarre lyrics. Gabriel was the front man and his shyness posed a problem. “The others had no understanding of the stress it put on me,” he said. “I was the one having to sell it at gigs… the audiences weren’t the least bit interested in what we had to offer.”

Gabriel’s theatrical instincts took over. He wore costumes and makeup and shaved wedges out of his hairline. At a Dublin show, he donned a designer dress and a fox head. His bandmates despised the costumes but audiences reacted well. Gabriel’s early songwriting efforts emulated the Bee Gees. He wrote on piano while his bandmates wrote guitar-based tapestries. This led to creative friction, further exacerbated when Gabriel grew possessive over lyrics.

In 1968, Genesis released their first album From Genesis To Revelation. It was categorized in the religious section of record stores and sold poorly. Two years later, Genesis signed a management deal with Charisma Records. They were paid £10 a week. The band fired their original drummer and searched for a replacement. Roger Taylor, future drummer for Queen, declined. The band opted for Phil Collins, who could also sing.

Gabriel worked on side projects, including playing flute on the Cat Stevens album Mona Bone Jakon. In 1974, Genesis released Selling England By the Pound. The song “I Know What I Like” charted at #21. Film director William Friedkin was impressed by Gabriel’s lyrics and asked the singer to collaborate on a screenplay. The band refused to grant Gabriel time off and he promptly quit. Management convinced Friedkin to back away and Gabriel sheepishly returned.

In 1974, Gabriel’s wife Jill had a difficult birth with their first child Anna. “We were recording in deep Wales,” Gabriel said, “and my daughter was between life and death in Paddington. There was a five-hour drive to visit my wife and daughter. It was absolutely exhausting. The rest of the band couldn’t understand… it was something the others found pretty threatening.”

Gabriel’s daughter survived but his resentment toward the band remained. After releasing their tour de force album The Lamb Lies Down on Broadway, Gabriel told the band he was leaving. He toured with Genesis for six months, but his heart was elsewhere. The band achieved fame just as Gabriel departed. Phil Collins took over singing duties while Gabriel chose to be with his family. “I wanted to be outside the music business. At first I was just growing vegetables and looking after the baby. I looked at this commune that I was quite serious about joining.” When he learned the commune’s name was Genesis, he opted out.

By late-1975, Gabriel became restless. “The more I was without music, the more I realized I still loved it and wanted to get back.” He spent time with guitarist Robert Fripp, who’d left King Crimson. The two collaborated on a song called “Here Comes the Flood” that presciently warned of global warming. Fripp released the song on his solo album.

In 1976, Gabriel released his debut single “Solsbury Hill.” The song reflects his decision to break ties with Genesis and his subsequent disillusionment. “I had to listen had no choice,” Gabriel sings. “I just had to trust imagination” even though “my friends would think I was a nut.” In Gabriel’s words, the song is “about being prepared to lose what you have for what you might get… It’s about letting go.” “Solsbury Hill” became a top 20 hit in the UK and gave Gabriel the courage to embark on a solo album.

The resulting album was a mish-mash of unrelated songs that sounded a lot like Genesis. “Solsbury Hill” and “Here Comes the Flood” were the standouts but the rest of the album is forgettable. It reached number 7 on the UK charts compared to the first post-Gabriel Genesis album Trick of the Tail that made it to number 3.

When Gabriel toured for the album he resolved not to play Genesis songs though he did cover artists like Marvin Gaye and the Kinks. He abandoned costumes but wore elaborate makeup. He experimented with performance ideas like disappearing from stage and reappearing in a distant balcony.

For his second solo album, he turned to Robert Fripp as producer. Fripp suggested they record the album in six weeks. Gabriel agreed, but the results were so disappointing he nearly retired from music. “I learned that I don’t do good work in a hurry,” he said. Searching for inspiration, Gabriel immersed himself in African music. He fell in love with the complex polyrhythms and obscure percussive instruments such as djembes, tablas and dun duns. He decided to record his third album in his home studio near Bath.

Gabriel brought in drummers Phil Collins and Jerry Marotta and gave them an unusual edict: no cymbals. The key moment in the album’s creation came when engineer Hugh Padgham accidentally opened an overhead microphone intended for use as a talkback channel. (Talkback allows musicians to communicate with the recording booth.) The result was a heavily compressed drum sound that came to be known as gated reverb. Gated reverb revolutionized 1980’s music. It was used on Phil Collins’ hit “In the Air Tonight,” David Bowie’s “Let’s Dance” and Bruce Springsteen’s “Born in the U.S.A.”

The third solo album (often called “Melt” due to the melting image of Gabriel on the cover) marks Gabriel’s creative breakthrough. He described the album’s themes as “the history of a decaying mind.” The songs are about obsession, psychosis and addiction. This was the age of punk rock and in some ways, “Melt” is Gabriel’s punk effort. He recorded sound samples at junkyards like crashing metal and broken glass and reinterpreted them as an unsettling percussive tableau.

The first song “Intruder” opens with the sound of a creaky door followed by Collins’ gated reverb drumming. The lyrics describe a person breaking into a house to “leave his mark.” Song two, “No Self Control” is about the inability to control one’s urges. A persistent marimba rhythm backs the lyrics as Gabriel ominously sings, “You know I hate to hurt you, I hate to see your pain. But I don’t know how to stop.” “I Don’t Remember” includes a sonic string battle between Fripp’s guitar and Levin’s Chapman bass. The lyrics describe the denial common among criminals who refuse to acknowledge their sins. “Family Snapshot” is based on the memoirs of Arthur Bremer, who attempted to assassinate George Wallace. The song is a chilling, psycho-portrait evoking Lee Harvey Oswald.

The most powerful song on the album is “Biko,” about the murder of South African anti-apartheid writer Steven Biko at the hands of white prison guards. The song marks Gabriel’s entry into political activism. It includes a haunting and hypnotic drumbeat and chants from Biko’s actual funeral. “Biko” became an anti-Apartheid anthem and is credited with making resistance to South African policies popular in western culture.

Rolling Stone wrote that the album “is tremendous” and “sticks in the mind like the haunted heroes of the best film noirs.” Gabriel’s label Atlantic Records hated it. The head of A&R John Kalodner recommended that Atlantic drop Gabriel from their roster. After hearing the song “Lead A Normal Life,” Atlantic founder Ahmet Ertegun asked if Gabriel had been in a mental hospital. “They thought I’d had a breakdown and recorded a piece of crap,” Gabriel explained. “I thought I’d really found myself on that record and then someone just squashes it. I went through some primordial rejection issues.”

Gabriel left Atlantic for Mercury Records. The album was a massive hit reaching #1 on the 1980 UK Charts. In 1981, Gabriel became involved with the WOMAD festival (World of Music, Arts and Dance). The event was a catalyst for the burgeoning world music scene. Gabriel personally financed the tour and spiraling costs led him to the verge of bankruptcy. “I received death threats and liquidators forged signatures on contracts,” he said. His old band Genesis came to the rescue. They proposed a reunion concert to help Gabriel pay his debts. Gabriel was grateful but made sure to communicate the one-off nature of the event by entering and leaving stage in a coffin.

In 1982, Gabriel released Security and continued his exploration of African folk drumming. The opening song “The Rhythm of the Heat” is a tribal chant that slowly builds to a climax sounding like an African exorcism. The song is inspired by Carl Jung’s 1925 visit to Africa where he joined a group of drummers and dancers and became overwhelmed with fear. Gabriel worked with the Ghanaian drum band Ekome to capture the rhythmic intensity.

The album further explores Gabriel’s political activism. “San Jacinto” is about a Native American whose culture is overwhelmed by western society. “Wallflower” is inspired by the plight of Latin American political prisoners. “Shock the Monkey” is ostensibly about animal rights, though Gabriel claims it’s a metaphor for human jealousy.

During the tour, Gabriel went skinhead and adorned his face with exotic blue and white makeup. For the song “Lay Your Hands on Me,” he walked to the edge of stage, turned his back to the crowd and deliberately fell into the audience and crowd surfed. “I’d done those hippy psychological games, falling backwards and trusting people to catch you,” he said. “For the most part I got caught though early on in San Francisco they moved away.  That hurt.”

Security reached No. 6 on the UK charts while “Shock the Monkey” became Gabriel’s first Top 40 hit in the US. Though he was on the brink of stardom, he took time off. His marriage was in upheaval and he entered therapy. He dabbled in side projects with the likes of Stewart Copeland, Laurie Anderson and Shankar. He also composed a gorgeous soundtrack for the film Birdy.

In 1986, his album So catapulted Gabriel from cult artist to commercial rock star. Many of Gabriel’s longtime fans view this as the moment his music lost its edge. But with songs like “In Your Eyes,” “Mercy Street” and “Don’t Give Up,” So holds its own. The record earned Gabriel a nomination for Album of the Year at the Grammy Awards. (It lost to Paul Simon’s Graceland.)

—I researched this article by reading Turn It On Again: Peter Gabriel, Phil Collins and Genesis by Dave Thompson, My Book of Genesis by Richard MacPhall, Without Frontiers: The Life and Music of Peter Gabriel by Daryl Easlea and Peter Gabriel: In His Own Words by Peter Gabriel.