"With hindsight, I realize that if I’d only had more confidence the punk scene would have suited me well.” 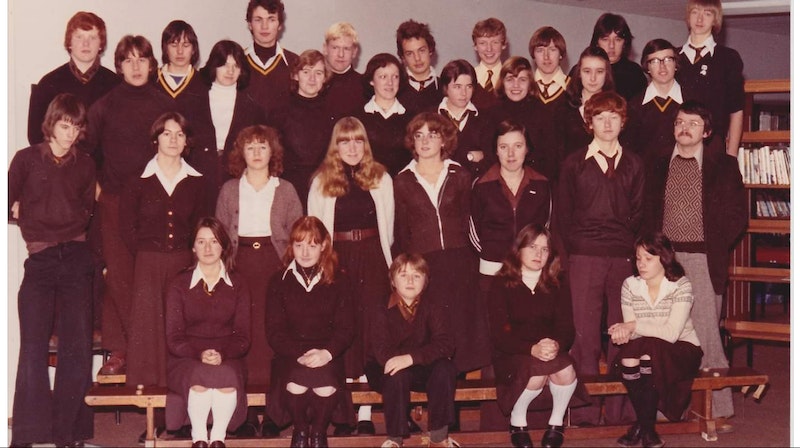 Paul Johnson Rogers’ childhood was spent in a place that had little in common with West Sussex. Whims of fate and parental instincts were as much a part of his creative development as any artistic influence.

Paul Johnson Rogers: “I was born in Streatham, South London which, at the time, was an area that could fairly be described as ‘in decline,’ so just before I hit my teens my parents decided to move to the quiet seaside village of Lancing. Boundstone was the name of the local high school, so that’s where I went. [It] was a government-funded school (confusingly, in the UK ‘public schools’ are actually private schools, usually with very high fees, the sort of places attended by the children of wealthy business leaders, aristocrats and royalty). Boundstone was a ‘comprehensive’ high school… it was also, for the time, quite a large school with, I think, over 1000 pupils. The catchment area was pretty big, encompassing areas of wealth and comparative poverty. Some of the kids wanted to learn, some of them just wanted to cause as much trouble as they could before leaving. The teachers were, on the whole, a pretty dedicated bunch.”

Professor Sally Mackey works today teaching at The Royal Central School of Speech and Drama, University Of London. Her career had just begun as she found herself swept up in the idealistic days of the comprehensive system.

Sally Mackey: “We married in 1977. I was 20. We had just moved to the area for my husband David’s job. He was working out of Shoreham-By-Sea, the small coastal town next door to Lancing... I was initially traveling up to London for my PGCE (Post-Graduate Certificate of Education) work at Goldsmith’s College, University Of London. The middle term on this PGCE was spent on teaching practice in a [comprehensive] school for 11-18-year-olds. To save on traveling 90 minutes each way, the college let me do my teaching practice near where we lived. Boundstone had a really good reputation for drama—the best in the area by far. Goldsmith’s approached their head of drama, Alan Strong, to see if he would take me as a full-time [student teacher] in the spring term. I came to comprehensives during [the 1977-’78 school years]. Previously, you had to sit an exam at age 11 and if you passed it, you went to grammar school. If you didn’t, you went to inferior secondary modern [schools]. It was a socially divisive system. The comprehensive system attempted to bring society together by mixing young people at school. (All this was outside the [public] system). There remain a number of [public] schools in the UK. The most well-known are places like Eton, Harrow and Rugby. The [public] system was hated by those of us passionate about state comprehensive education in the 1970s.”

Born and bred in Lancing, actor Chris Beaumont has an impressive resume of film, TV, and theater credits that spans five decades. He ran his own theater/music venue in Brighton during the 1990s and 2000s. One of his earliest star turns came with Gynt On The Rocks in which he played the role of Elder Gynt.

Chris Beaumont: “Boundstone was great. When I went there it had recently been classed as the best Comprehensive school in the country and had a brilliant forward thinking headmaster, Stephen Love. Much of the success was down to him. Excellent reputation. Very big on the arts, music, drama and sport. The students were a mixed bag—as they always are—and the staff were modern, enthusiastic and positive.”

The fond Boundstone memories Mackey and Beaumont have were not shared across the board.

Paul Johnson Rogers: “I hated the place, and by the time I hit 14, I took every opportunity I could to play truant. Unlike most truants, however, I’d hide out either in the local music shop or, more likely, in the local public library, where I’d work my way through advanced physics text books or read classic works of literature, which I suppose is why the library staff left me in peace.”

Alan Bertrand played the role of The Magician in Gynt. Like Rogers and other students, prior to working with Alan Strong the school had a negative impact on his life.

Alan Bertrand: “I lived in Lancing for many years, Boundstone was the obvious school. It was also a snake pit where I had to fight for basic survival. I was very unhappy a lot of the time, and then came the day I broke the arm of one of the bullies who were picking on me. Amazingly they all left me alone after that.”

Paul Johnson Rogers: “At that time, when kids reached 16 they had a number of choices: stay on at school for two years of sixth form, move on to a college of Further Education, or finish education and go to work. I’d chosen to study at Chichester College… I was a full-time music student… I played in a few orchestras and sang in choirs. I also played in several bands: a Brighton punk band called No Exit, who were successful in the punk scene supporting acts such as Siouxsie and the Banshees (we played all over the south of England); Crucible, a sort of prog rock band who regularly supported The Enid but whose biggest retrospective claim to fame was once jamming with Hans Zimmer (who was part of the Brighton live music scene around that time), and a rockabilly band—the only band that made good money on its gigs. That had a variety of names and [its] most popular song was called ‘Punk Bashing Boogie’. There was a lot of violence between the various fashion and music tribes, so playing in diverse bands definitely carried an element of personal risk!”

Chris Beaumont: “When you’re thinking of Lancing you may be imagining a small classic English country village. It's not that at all, really. It’s a small town sandwiched in between Worthing and Brighton and part of a coastal conurbation area, so we all had plenty of access to towns with clubs, pubs and music venues. Even though we were very young! Students often went along to Brighton to see bands with punk really taking off in about 1975-76 in the UK with the Sex Pistols and The Damned, etc.”

Alan Bertrand: “Punk rock? Best not get me started, I have an apocryphal memory of listening to Radio Luxembourg under the bedsheets when they announced the death of Elvis Presley, then played “White Riot” by The Clash and my whole world changed.”

Paul Johnson Rogers: “Punk culture? I thought it was great, but couldn’t fully embrace it, mostly because I was a bit of a misfit. In some ways I was very immature, in other ways too grown up. I wasn’t very good at being a teenager. In fact, at the time, I wasn’t very good at being a human. With hindsight, I realize that if I’d only had more confidence the punk scene would have suited me well.”