The Romantic Spectacle of Alan Strong

Gynt on the Rocks and the beginning of "punk musical theater" over 30 years ago in Lancing, West Sussex. 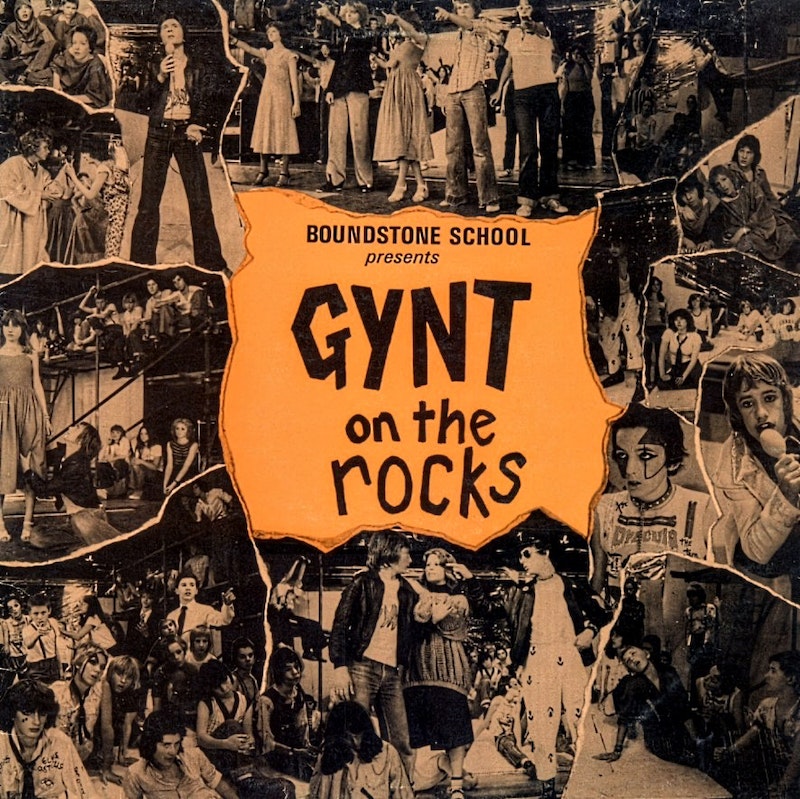 If punk rock is meant to be a ragged reactionary confrontation then the crowd pleasing glitz of musical theater must be its polar opposite. Snappy dance routines, big-budget production design, and uplifting stories of love and triumph have long been standard fare for stage musicals big and small. Punk culture’s concerts, TV shows, fashions, and movies, on the other hand, were initially meant to shock. Entertainment was not eschewed by punk, but that’s never been its sole driving force. From its earliest days in the 1970s it was always meant to be something “more” than a pop movement. Punk culture tried to bring people together under a banner of alienation and creative discontent. It endures to this day as the ultimate mass action of performance art protest.

Green Day’s American Idiot is often identified as the first major work of theater to prove that punk shared common ground with stage musicals. While it didn’t kick off a new fad of snot encrusted/mohawked song-and-dance shows, it did create wider awareness that punk could no longer be defined strictly by visceral anger. In the 2000s American Idiot made its biggest splash on the pop charts when it first appeared as an album written in the form of a rock opera. It was adapted for Broadway in 2009 where it garnered positive reviews from music fans and critics of traditional theater, as well as vitriol from the Flat Earth Society of punk snobs who refused to accept the reality that their once intentionally polarizing milieu could enjoy acceptance on The Great White Way.

Little did these naysayers know that the blasphemous concept of punk musical theater had come to fruition 31 years earlier. Did this occur in NYC? London? Los Angeles? Paris? No. It was in the suburban English village of Lancing, West Sussex. It was there that Boundstone Comprehensive School produced the punked-out stage show Gynt On The Rocks back in the dayglo-damaged year of 1978. This groundbreaking moment was the brainchild of iconoclastic drama teacher Alan Strong, adventurous composer Paul Johnson Rogers, a handful of local musicians and school staffers, and a rag-tag theatrical army of 200 Boundstone students.

Alan Strong was a passionate supporter of avant-garde theater, a medium whose irreverence resembled much of the in-your-face rabble rousing embraced by the UK punk scene. He viewed experimental theater as a fine art form and an essential component of a well-rounded education. Gregarious and enthusiastic, standing at seven feet tall (the consequence of Marfan syndrome), Strong was physically and spiritually a larger than life character whose name still inspires awe among the students and contemporaries who worked with him before AIDS took his life in 2002. Strong’s legacy is debated and celebrated as much now as it was during the 1970s and early-80s, a time when exposing children to provocative art sparked grave concern. For Mary Whitehouse and other repressive Thatcher-era media critics, punk’s mainstream influence was a chaotic disruption at best, an immoral deviance at worst.

Strong put his all into Gynt On The Rocks. He single-handedly wrote the show’s dialogue and the lyrics for its original songs. Together these formed a modernized adaptation of Henrik Ibsen’s Peer Gynt. The music score was a convergence of expansive prog-rock arrangements and overdriven distortion. It was written by 18-year-old Paul Johnson Rogers, a Boundstone alum/versatile freelance musician who was then studying music at Chichester College. A serendipitous meeting with Strong at a local pub flicked a switch in Rogers’ mind bringing life to a fresh musical theater concept that steered clear of Broadway polish. Strong and Rogers came up with a brash work tailored to the unique strengths and quirks of novice actors and young un-trained artists all while maintaining the avant-garde weirdness of Ibsen’s original vision. The words and music unleashed the hopes, fears, dreams, and desires that swirled within the collective teenage imagination of the show’s cast and crew.

Gynt’s production was informed by the socially conscious philosophies behind the UK’s comprehensive educational system. Upon its debut the show was celebrated as an exemplary product of that system; it generated cathartic emotional reactions from audiences and everyone involved in its creation. The Boundstone School commemorated Gynt On The Rocks’ success by pressing up an original soundtrack album featuring performances from Rogers, his back-up band, and the cast. The record came packaged in a fiery orange photo collage made up of action shots taken at a live performance of Gynt; the back cover included detailed notes from Strong. This private press artifact has since become a collector’s item, a rare amalgam of romantic spectacle and irreverent subversion. Its power and innovation remains incomparable.