A new bookcase and all the trouble that entails. 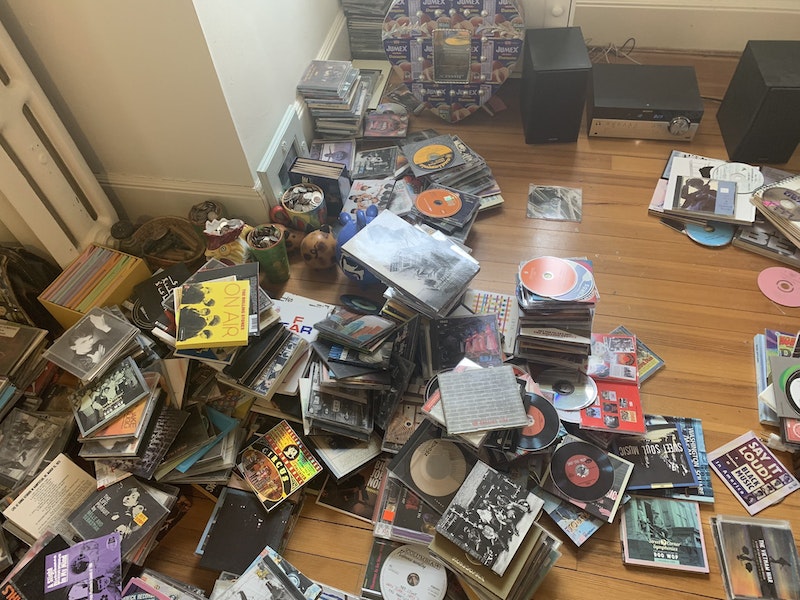 A Christmas present arrives this week and I’m a bit flustered. Or was, until getting down to work and cleaning up my office so that the fellows delivering a new bookcase won’t trip over 1000 CDs, books, photos, paintings and knick-knacks accumulated over the past 15 years. Not exactly a Herculean task, but it messed with my routine—at 21, I couldn’t imagine turning into a fuddy-duddy, at least as far as very minor inconveniences went, although seeing my Uncle Joe (born in 1915) falling into the same trap as he passed 60, I should’ve seen it coming.

This is how it started. Back in November, my wife Melissa, who becomes a touch frantic about picking out gifts—I’m not immune, though not to the extent that I’d ask her for hints, since neither of us is really in need of much—took the well-trod path of asking our son Booker to impersonate Hercule Poirot, and find out what Dear Old Dad had a hankering for. As usual, during a conversation, he took the direct route and simply asked. Normally, I’ve no idea, but while gabbing about other matters, I looked around at my mess of an office, and said that a bookcase, especially one that would block out the sun, would be perfect. Emphasis: I’m not at all a book fetishist, one of those people who say to everyone in earshot, “I couldn’t live without my books! They’re my life, a part of my very being.” I don’t alphabetize, sort by author, genre, color or size.

Years ago, before we hired Jim Bush, an excellent plumber who, at least on his business card (he’s old school) doubles as “The Drain Surgeon,” to install proper sump pumps—the couple we purchased our house from had some fancy French system that was completely flawed—we had semi-annual floods in the large but very unfinished basement, which fouled box upon unopened box of books, old magazines and other “junk” that we’d never thrown out. (I often wonder whether my son Nicky will ever look at his report cards, tests and “participation” blue ribbons from his grade school in Manhattan. No, is my guess, but since I retain correspondence from the late-1960s until the early-90s, mine is not to reason why.) Anyway, we had to toss some 800 water-logged books that didn’t make the cut for the living room, a combo of what my wife and I had kept over the years, and not a tear was shed, although I winced more than once when carrying the now-garbage to the “refuse room” for 1-800-JUNK, feeling my back about to snap. It was no tragedy that four copies of Play As It Lays, pocket paperbacks of Shakespeare, Anais Nin anthologies and David Halberstam’s (unreadable today) The Best and the Brightest, for example, got lost in the floods.

Nevertheless, back to the upstairs wing of the house—and I must point out that Melissa, whose design aesthetics are fastidious but perfect, makes sure every room is just so, except for my office, which she’s allowed an exemption for me to be me, because that’s what I gotta be, and unlike others with chock-a-block work spaces, there’s zero “method to this madness.” I’m just sort of a slob—my room might get a violation from Baltimore City if the cops weren’t so busy ticketing cars and government officials consumed with a new graft opportunity. In fact, the idea for a bookcase came last fall when I wandered over to the pile of CDs and took a sliding spill that resulted in blood, bruises and an admonition from Booker that my increasing clumsiness in and out of doors—I prefer to believe I’m just a dreamer (the only one)—means I should wear a football helmet at all times.

As I noted above, the bookcase—a fancy one!—was ordered in November but because of the chain supply bottleneck is just ready now. That’s okay, I replaced my Apple PC a couple of years ago, and it took four months to undergo the monotonous task of transferring information. (Not so okay on the supply front was when our Jeep’s engine conked out at the start of December and a new one wasn’t available until late-February.) I’ve got so many books, read and un-read, taking up real estate that it’ll make life easier when they’re all in one place.

I’m not sure about the CDs: I don’t have the patience to sort out the duplicates (three copies of Highway 61 Revisited: I’m a little embarrassed to admit that when I couldn’t find that recording in the rubble, I just bought another one), the now-clunky releases from the late-1980s when the CD largely replaced albums, and all the “anniversary” collections that cost more for a couple of unreleased tracks and a visually-pleasing booklet thrown in for the “bargain.”

(Unsurprisingly, I didn’t acknowledge the album-to-CD switcheroo for a couple of years. After my apartment in Baltimore was ransacked in early-1987 (called the cops, they came, and asked if I’d been upstairs; I said, somewhat taken aback, “Isn’t that your job? You’ve got the gun!”) and my modest stereo system—I think that’s what we called it then—was stolen, my friend Joe knew a guy who knew a guy who made monster stereo set-ups, with speakers almost my height, and I cranked that motherfucker. It was pricey, which was a shame since it became obsolete just a few years later in our Tribeca loft.)

In truth, the other day I chucked all those company-produced brochures, since I just want the music from the Beach Boys’ Smile or the Stones’ Aftermath. I must have eight Phil Ochs CDs, five Bessie Smith collections, same for Miles Davis, Charlie Parker, loads of Byrds and Who, a representation of King Crimson and The Cure, Blondie, the dBs, Pharoah Sanders, Real Estate, Peter Tosh, Bob Marley, Elvis Costello, Aretha, Duke Ellington, Gregory Isaacs, Marvin Gaye, Real Estate, Autechre, Joni Mitchell, Billie Holiday, The Everly Brothers, at least 50 Dylan bootlegs, and every note that Gram Parsons or the Smiths ever recorded. Early Elvis (with his otherworldly “Blue Moon”), Johnny Cash from the Sun days, assorted Nina Simone CDs, probably too much Donovan, some terrific John Peel radio shows with the Yardbirds, the Kinks, Traffic and Jam, the five excellent Bob Dylan Radio Hour sets, the “Blowing the Fuse,” “Street Corner Symphonies” and “Sweet Soul Music,” bunch of CDs that span from 1936-1975, fabulous Stones and Bowie boots and a bunch of losers that needn’t be mentioned.

I’m getting more tired listing some of this music than hauling them into different corners, so that’s it, bub.