You Can Do Magic, Honey 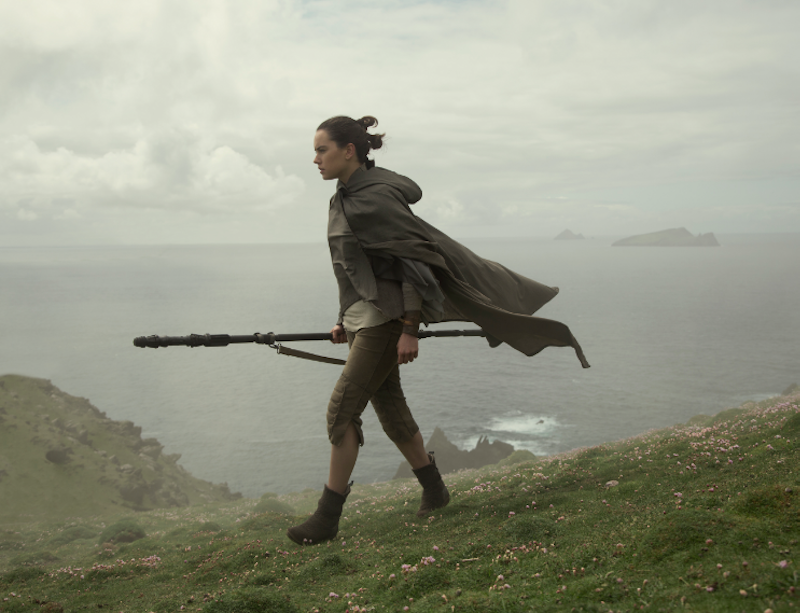 When the original film, Star Wars: Episode IV—A New Hope, came out in 1977, it was a radical departure from idea-driven 1970s science fiction movies. Where Battle for the Planet of the Apes (1973) questioned the definition of civilization relative to concepts of war and slavery—with dialogue scenes that actually lasted longer than 30 seconds—Star Wars seemed like a two-hour cycle of rapid-fire explosions, screaming, pithy comments, passive-aggressive flirtation, whistling garbage cans, vague mystical allusions, and the occasional establishing shot.

Where Zardoz (1974) questioned the relationship between death and sex, Star Wars presented a sanitized world in which a single vanilla kiss between Luke and Leia could only be had because there was a high possibility of certain death (that is, before Lucas started to sauce it up with a love triangle in Empire and a hint of incest by the end of Jedi).

And while Logan’s Run (1976), probably the most intelligent of all sci-fi films that decade, explored disturbing ideas of ageism, utopia, and conformity, Star Wars was mostly Joseph Campbell for Dummies, a pared down, linear “hero’s journey” as experienced by a cute-as-a-button teenager from a Midwestern farm—Kurosawa’s Hidden Fortress with one-sixteenth of the complexity and no Toshiro Mifune.

Star Wars had more in common with Richard Donner’s Superman, which came out a year later in 1978. Donner’s Clark Kent, played by Christopher Reeve, was a nostalgic callback to traditional cultural ideas of what it was to be a stand-up guy: you held down a job, were uncomplicated, friendly, and decent, worked hard, and believed in The American Way. After the werewolf orgasm of 1960s counterculture, Vietnam, and watching JFK take a bullet in the head on live television, the country might’ve needed to hear another fairytale about its greatness. And by 1974, the nostalgia mill must’ve been running hot when Happy Days aired on ABC with Lucas’ American Graffiti as its primary influence. America was begging for a bedtime story. Maybe Luke Skywalker was just Richie Cunningham in space.

Still, Lucas had it down: everybody loves a buddy movie with a damsel in distress in a world populated with Halloween costumes, British Nazis, and all scary sexuality carefully reduced and sublimated. His vision was Charles Reich’s The Greening of America meets Buck Rogers pulp at a Madison Avenue-depth of commercial cynicism. Star Wars was the definitive franchise, the ultimate I.P., and unfortunately still is.

The most recent episode is shitty. It’s not interesting shit or thought-provoking shit. It’s just the simple unadorned article. The first film in the series was at least visually clever. The subsequent films have gotten progressively worse, including Empire Strikes Back, which can only be said to be a “great movie” when compared to the episodes that came after it.

I wish Roger Ebert were still around. He’d give The Last Jedi four stars and write something like, sure, it’s garbage, but what do you expect? Great art? And he’d have an excellent point. How can we expect anything but more of the same: explosions, screaming, predictability, another chirping mailbox, and the mournful manliness of the farm boy, now a grizzled and broken fiftysomething, betrayed by his narcissistic, perfectly waxed, emo nephew.

In our brave new science fiction reality of taking healthcare away from those who need it most, giving tax breaks to soulless reptilian corporations and their bondservants, raping the earth, shielding Nazis, and colluding with a foreign power to subvert the democratic process, there’s no “Resistance” or “Defenders of the Republic” or Galactic Mujahedeen available. We’re too tired and have too much student loan debt for all that. These days even the emo kid with the stupid art deco hockey mask seems like a relief. And I guess that’s the bottom line when marketing a movie like this. Burn the ancient texts of Jedi philosophy. Why not? Rey is already hoodooed-up with the Force all Vampire Diaries-style: just look good in a pair of jeans and have nice teeth and you can do magic, honey. Trust me. You’re gonna be huge.

Should you go see it? If there’s nothing better to do, you might hit a matinee after a scotch or two.

I don’t care about spoiling it for you because I think that’s largely impossible. So I’ll put it this way: you want explosions? It’s got explosions. You want dyspeptic Brits dressed up like SS officers fuming in impotent rage? You came to the right place. You want politically-correct plot choices, teenage fan service, and one-dimensional characters with easy to understand emotional responses? Shit, fool, we got those for days. You want the late Carrie Fisher navigating the pitiless vacuum of space like Sister Bertrille the Flying Nun? You want cuddly plush bird-meerkats who’ll be easy to market as beanbag toys made by indentured servants in Malaysia?

When I first saw Star Wars IV, I didn’t want to be a Jedi. I didn’t like Disney, which I associated with Old Yeller and The Mickey Mouse Club. I wanted to be a Sith, even though I didn’t know much more than “Dark Lord of the Sith” sounded a lot cooler than “Jedi.” I wanted to do Darth Vader’s invisible choke on the guys who used to bully me on the playground and say, “I find your lack of faith disturbing.” Now, as an adult watching The Last Jedi, the only things I find disturbing are the low-fidelity echoes of the past: grown-ass writers trying to replicate a fraction of what they felt when they were kids.

I’m sure Sister Bertrille will fly again before the franchise devolves into holographic animal porn sometime in the 22nd century. It’s not about creating a sense of wonder, approaching ideas from a fresh perspective, or telling a gripping adventure story. It hasn’t been for decades. It’s about keeping the box office juice flowing. As the medicine cabinet says in THX1138, “If you feel you are not properly sedated, call 348-844 immediately. Failure to do so may result in prosecution for criminal drug evasion.” And if you’re one of the drones going nuts about the genius of The Last Jedi, I don’t know what to tell you.