Not Better Than a Documentary Making Of

Michelle Williams shines in All the Money in the World, but that's about it. B- 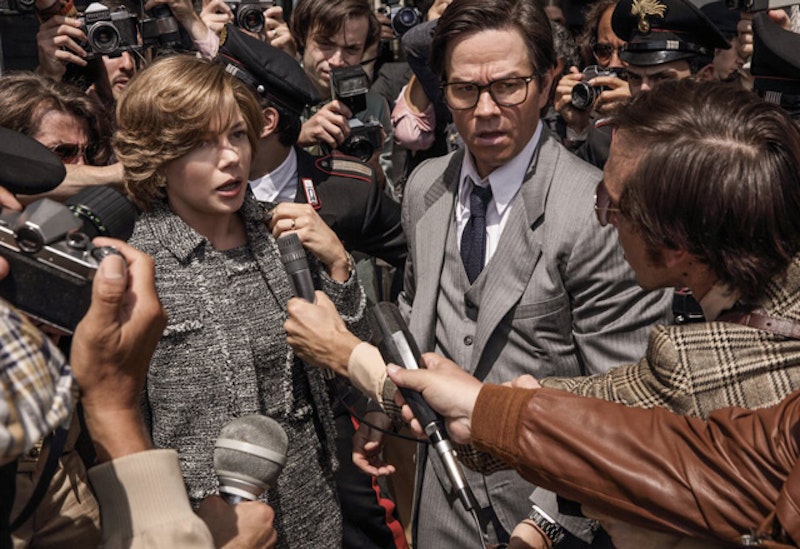 The new film All the Money in the World is the story of the time in the mid-1970s that the grandson of oil tycoon J. Paul Getty was kidnapped in Italy and the old man refused for months to pay the ransom. Even better known, by now, is the behind-the-scenes story of the film.

The movie was completely done, in the can and ready for a festival premiere when, in late October, star Kevin Spacey was accused of sexual predation by several people. So in an unprecedented move, director Ridley Scott fired Spacey, hired Christopher Plummer to replace him, and re-shot all of the Getty scenes with the new actor, in order to meet the original release date. Even more impressively, they did it in nine days—a feat accomplished by a director and star who are both over 80 years old.

Sure, this isn’t exactly Fast and the Furious stuff—most of the Getty scenes consist of him in a room talking with one other person. But it’s still quite an undertaking—and that, ironically, is the film’s downfall: Nothing actually on screen is quite as impressive or interesting as the story behind it.

All the Money in the World is the pretty straightforward telling of the Getty kidnapping, as it unfolded over the course of about six months in 1973, interspersed with a few flashbacks of the Getty grandson’s youth. It thankfully doesn’t try to do that whole thing where it makes the story it’s telling a microcosm of America or capitalism, but in its absence, it struggles to find an overarching point or through line.

Getty is depicted as the world’s richest man, a particularly venal and uncaring sort who’s equally withholding of both money and affection. His son (Andrew Buccan) is a disaster of an addict, so when the kidnapping takes place of John Paul III (Charlie Plummer), it’s Getty’s daughter-in-law (Michelle Williams) who must take charge. But the old man won’t pay the ransom, and instead relies on his ex-CIA man fixer (Mark Wahlberg) to free his grandson.

Plummer is first-rate as Getty, especially once you realize that he had mere days to prepare for the role. But he has the movie stolen from under him by Michelle Williams, who’s been in a lot of movies this year but this is the best performance by far. She doesn’t play the part by the book, but more as the tough-as-nails type, and it’s a revelation.

It’s just a shame that none of the other characters really register, and that starts with Wahlberg’s tough guy, who seems to be in a different movie than all of the other characters. It’s just Wahlberg doing his thing, like he’s in a contemporary Brooklyn cop thriller; there’s nothing about the performance that grounds it in this story, or in 1973.

Charllie Plummer (no relation to Christopher) never really gets a handle on the young Getty either; I might rather have seen a movie about his post-kidnapping life (the FX mini-series coming next year about the case will supposedly touch on that). None of the kidnappers make much of an impression either.

All the Money in the World isn’t bad exactly. But it brought to mind the old Gene Siskel question about whether this movie is more interesting than a documentary of all the same actors having lunch. I’d much rather watch a making-of documentary than watch the movie itself again.

Sorkin Does His Best Scorsese in Molly’s Game. C

Molly’s Game represents the directorial debut of Aaron Sorkin, the longtime TV impresario (The West Wing, The Newsroom) who moved on to a hugely successful career as a prestige screenwriter (most notably of the Oscar-winning The Social Network, but also of Moneyball and Charlie Wilson’s War). What’s notable about Molly’s Game is that while it avoids the many writing pitfalls that Sorkin has repeatedly fallen in throughout his career, we don’t get a whole lot of Good Sorkin from it either. It feels a lot more like just another Goodfellas knockoff.

The film is based on a memoir of the same name by Molly Bloom, a former Olympic skier who ran high-stakes poker games for major players both in Hollywood and on Wall Street. Jessica Chastain stars as Bloom, who used street smarts to make huge money in the poker world, before running into legal trouble (Idris Elba plays her lawyer).

The film is structured similarly to Goodfellas, The Wolf of Wall Street, and other Scorsese films, as well as their many imitators—a youngish new person enters a sinful industry, explains How It All Works, and shows us exciting highs and lows, until it all comes crashing down in the third act.

What’s striking is that the film doesn’t really feel like much of a Sorkin product, for better or worse. The dialogue doesn’t sound like how his characters normally talk, the cast is entirely free of Sorkin regulars and the structure doesn’t bear many of his trademarks, aside from a meeting with a lawyer used as a framing device for flashbacks. Sure, it’s welcome that Sorkin has written a compelling, multidimensional female character, probably his first since CJ Gregg on The West Wing. The problem is… the movie is just sort of dull.

This movie doesn’t show us anything we haven’t seen before in countless movies about crime and gambling. Beyond that, there are other touches that are just beneath a writer of Sorkin’s caliber, including a framing device (yes, another) involving Olympic skiing, and a scene between Bloom (and her father) that seems to go on forever.

The only real sparkplug of the movie is Michael Cera, who shows up way too briefly as a scummy movie star who I gather is supposed to be Tobey Maguire, although the film goes to great lengths to not identify him. Cera in against-type jackass mode still hasn’t gotten old, and I wish we’d seen more of it here.

Most of all, Molly’s Game just seems like a missed opportunity: A fascinating filmmaker adapting fascinating subject matter into a deeply not-fascinating movie.