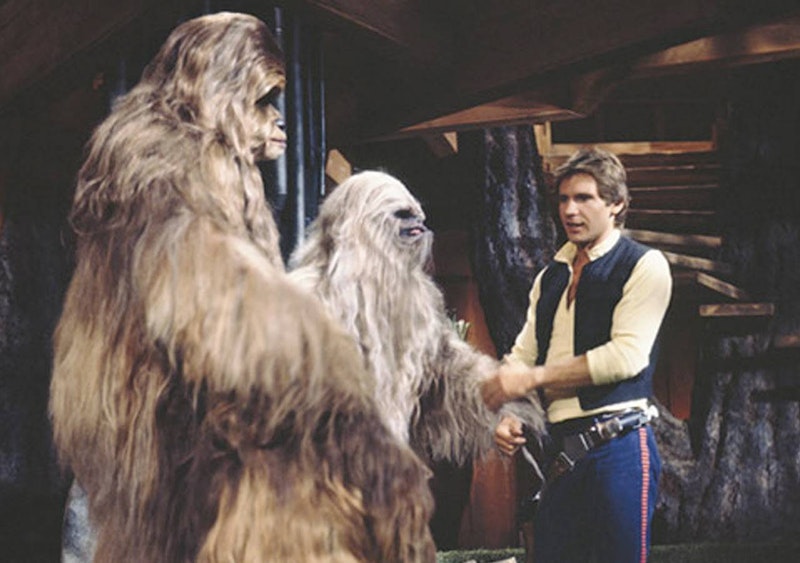 I haven’t seen The Last Jedi yet, but all my friends love it. Hardcore Star Wars fans are comparing and contrasting The Last Jedi to the rest of the series. Some are even petitioning to remove the film from the official canon. However, despite the usual Internet fanboy flame wars, there’s something all Star Wars fans can agree upon: the heap of garbage that was the Star Wars Holiday Special. I heard about it for years, but finally saw it on YouTube last year on Christmas Eve. How bad is it? Well, as my friend Eli Bosnick of the podcast God Awful Movies would say, if you only vaguely like Star Wars and think it could use more musical numbers and several minutes of dialogue made up entirely of Wookie growls, you’ll love this movie.

According to a recent Vox video, George Lucas wanted to keep Star Wars in audiences’ minds as they waited for the sequel, so he gave CBS permission to create a 90-minute holiday special in 1978 that not only included the movie’s beloved characters, but also threw in random skits and musical numbers. Everyone involved with the original movie knew it was crap, according to Mark Hamill, but Lucas convinced everyone to go along with the plan just to keep Star Wars-mania alive. The special only aired once, and those involved have tried to distance themselves from it ever since.

The plot is simple. Han Solo has to get Chewbacca back to his home planet Kashyyk to spend Life Day with his family. Unfortunately, the Empire is on their tail, so they’re going to late. Meanwhile, Chewbacca’s family—wife Malla, son Lumpy, and father Itchy—are patiently waiting for them back home, until a couple of Storm Troopers arrive looking for Chewbacca. Eventually Chewbacca and Han arrive, get rid of the Storm Troopers, and the Wookie family finally celebrates Life Day, which consists of dressing up in Druid robes, carrying lit snow globes, and gathering around a giant tree in the woods.

Because sitting around waiting for Chewbacca and Han gets boring after a while, the family often puts on the TV and hologram film boxes as a distraction, and this is where things get weird. There are three skits featuring Harvey Korman that are supposed to be funny: one where he’s an intergalactic cooking show host; another as an android that has to keep rebooting himself; and one where he’s an alien trying to woo Tatooine bartender Bea Arthur. Unfortunately, the jokes fall flat even by 1970s standards, and are a total waste of the late comedian’s talent.

Then there’s the musical number by Jefferson Starship halfway through the special. This isn’t “Red Octopus”-era Starship, though; this is the early version of the band’s horrible 1980s incarnation that gave us “We Built This City.” It doesn’t help that the band’s segment is full of cheesy '70s special effects, laser lights, and a keytar, making the entire thing laughable.

There are just two good things about the Holiday Special. The first is an animated segment that marks Boba Fett’s official debut in the Star Wars franchise. The animation is cheesy (Luke and Han look nothing like Luke and Han), but it’s still worth watching just to see everyone’s favorite space bounty hunter. The second semi-redeeming factor is Princess Leia singing during the Life Day celebration at the end. Who knew Carrie Fisher had some pipes?

Whether you’re a hardcore Star Wars fan or not, The Star Wars Holiday Special is something you have to see to believe.