Steven Spielberg can pull off corny like few others. A 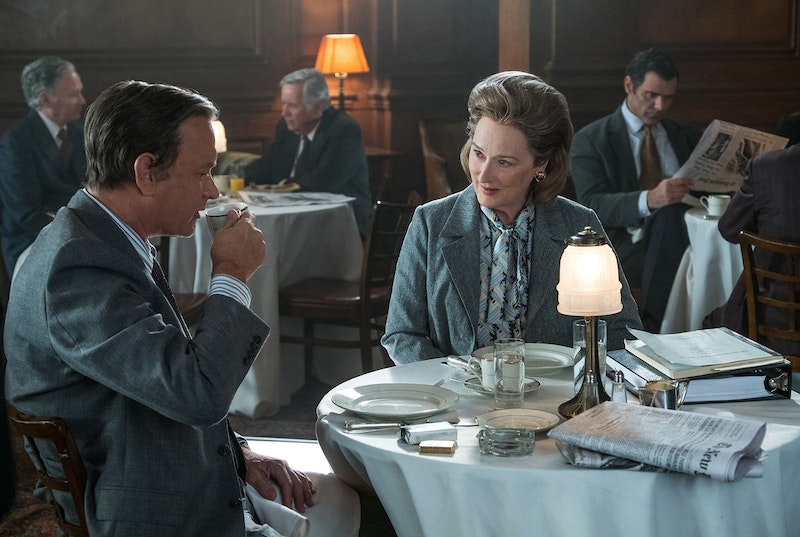 The Post looks from its description like an all-star arrangement of prestige elements: Director Steven Spielberg. Stars Tom Hanks and Meryl Streep. A stellar supporting cast. Subject matter (the publication of the Pentagon Papers) involving important historic events that particularly resonate with Baby Boomers, while also echoing the headlines of today.

This film, with the deck stacked so heavily, with only about 11 months since it was conceived, could’ve easily collapsed under its own weight. But it doesn’t—it’s a wonderfully crafted and thrilling treatment of the story, one that never gets too preachy or overzealous. It ranks with the best of Spielberg’s latter-day work, along with the similarly gravitas-laden Munich (2005) and Lincoln (2012).

The Post tells the story of The Washington Post’s work in publishing the Pentagon Papers in 1971, and most notably the roles in the drama of editor Ben Bradlee (Hanks) and publisher Katharine Graham (Streep). We see the paper’s reporters, led by Ben Bagdikian (Bob Odenkik) making contact with Daniel Ellsberg (Matthew Rhys) and reporting aspects of the story, and later fighting to the Supreme Court for the right to publish it.

What jumps out first is the style. The gorgeous cinematography, with longtime Spielberg collaborator Janusz Kamiński, makes it look not so much like a 1970s period movie but a movie actually made in the '70s. There’s nothing about the look and feel of the film that betrays that it was thrown together in less than a year.

The film also doesn’t feel overshadowed by that other movie about The Washington Post vs. Richard Nixon. Another film earlier this year, Mark Felt: The Man Who Brought Down the White House, did fall apart in comparison to All the President’s Men, but The Post is different enough, mostly because there’s no Woodward or Bernstein, and it’s a completely separate story, one that feels like a prequel.

Graham wasn’t a character in All the President’s Men (although she was the subject of the famous line about “I'd cut the words ‘her tit’ and print it”), while Hanks’ version of Bradlee takes another tack from Jason Robards’ earlier attempt, in which Robards didn’t even bother with the patrician accent. And while neither film has a Nixon character, The Post shows us “Nixon” in silhouette from the outside of the Oval Office, as his voice from the tapes plays. This shouldn’t work, but for some reason it does.

You’re probably thinking—didn’t The New York Times, and reporter Neil Sheehan, break the Pentagon Papers story first? Indeed they did—and the film concentrates largely on the Post’s battle with the Times over the story and the back-and-forth. It justifies itself by finding a couple of killer angles: Graham’s struggle against sexist investors who underestimate her, and Bradlee and Graham realizing the need to question their closeness to power and past friendships with the likes of JFK and Robert McNamara.

Streep is the cast’s highlight, as a legendary Washington figure who’s never had a major big screen portrayal before. Graham inherited the newspaper following her husband’s death and finds herself rising to the occasion while the paper’s financial backers don’t trust her. Hanks is fine, even if I never stopped seeing Tom Hanks instead of Ben Bradlee. The rest of the cast is deep, including David Cross, Tracy Letts, Carrie Coon, Bruce Greenwood, and Bradley Whitford, who’s really excelling this year at playing the asshole.

The Post may owe its existence to Donald Trump’s presidency. But it doesn’t belabor the point. And the film’s ending is unbelievably corny and on-the-nose. But Spielberg can pull off corny like few others.

The Greatest Showman Is Undone by One Fatal Flaw. B-

The Greatest Showman does so many little things right. It looks fantastic. It’s a completely original musical, not based on a pre-sold Broadway show, with first-rate songs from the La La Land/Dear Evan Hanson team of Benj Pasek and Justin Paul. You can tell it’s a longtime project of star Hugh Jackman, who’s clearly giving his all and having a great time on screen.

However, Showman, directed by first-timer Michael Gracey, has one huge flaw right in the middle of it: it’s totally false. It treats P.T. Barnum as a likable, smiling, honorable, all-American striver, played by a winning, grinning Hugh Jackman, when it fact Barnum was by all accounts at best a con man, and at worst, a sleazy, despicable exploiter. The film tells us that Barnum was a purveyor of the low, but it never quite shows us that.

The film, set in the mid-19th century, tells the early life story of Barnum, a man of modest upbringing who, having married a woman of much higher social standing (an utterly wasted Michelle Williams), strives to create first a museum of oddities, and later a proper circus. There’s a touch of early-career Donald Trump to Barnum, as a businessman who made a lot of money but nevertheless yearned desperately for a mainstream respectability that was always just out of reach.

But that’s ultimately the problem: Jackman plays Barnum as too much of a conventional hero, when a better version would’ve made him more of an antihero. He’s too unambiguously likeable—singing, dancing, smiling all the while—and any edges he had are completely sanded down.

It’s a shame, considering how much there is to like. The songs are immensely singable, much better than the ones in La La Land. The production design is outstanding, as are the costumes. The circus ensemble is wonderful, the best of its kind since the one in Big Fish. Zac Efron gets back to his High School Musical roots as a rich kid who slums with the circus and gets into a forbidden romance with trapeze performer Zendaya.

Less positive aspects include a plot turn that goes nowhere, involving Barnum’s supposed near-affair with star opera singer Jennifer Lind (Rebecca Ferguson, who doesn’t actually sing), and the overall structure; the film as I saw it was about 20 minutes shorter than the listed running time. It also ends somewhat abruptly. Once again, for all of The Greatest Showman’s virtues, the film just couldn’t crack the riddle of giving us a believable Barnum.