Film Review: Call Me By Your Name’s a Poignant Coming-of-Age Story

Armie Hammer has a career-making performance. A 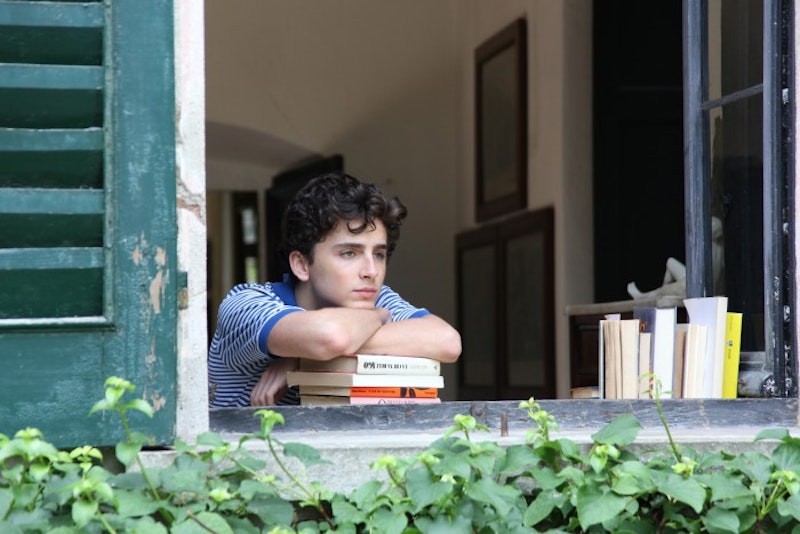 The film, set in 1982, is story of Elio (Timothée Chalamet), the teenaged Jewish son of American academics living in Italy (Michael Stuhlbarg and Amira Casar). Oliver (Armie Hammer) is a handsome grad student staying at the house as a sort of summer intern. The two men, both outwardly heterosexual, soon develop a bond that keeps hinting, slowly, at something more.

Aside from the considerable romantic tension, the film is a triumph of atmosphere—it’s all walks into town, long and appetizing meals, and other aspects of the European country life. Which is to say nothing for a certain, soon-to-be-notorious scene involving a peach, which represents the most unlikely sexual use of fruit in a movie this year, other than the grapefruit in Girls Trip.

Contrary to that laughable recent BuzzFeed piece that tried to cast him as the avatar of white male mediocrity in Hollywood, Hammer is immensely talented, and this is his best role to date. But even better is Chalamet, who also played the Howard Zinn-loving second-act boyfriend in Lady Bird. This is a brave, star-making performance.

But the movie saves the best for last, with a monologue, by Stuhlbarg, that’s beautiful in its simplicity and grace. It’s the best movie scene of the year, and the final shot isn’t far behind it. Stuhlbarg may have had the best year of any working actor, as he also delivered memorable turns in The Shape of Water, The Post, and the Fargo TV show. But he’s the best he’s ever been here.

Director Alexander Payne is a talented filmmaker who’s made some very good films, like Sideways, Election, and The Descendents. But his worldview has a glaring flaw: Payne is from Nebraska, and it’s clear that he hates everything about where he came from, especially the people. Therefore, his films are full of mean-spirited shots at dumb, toothless hicks, with occasional cracks at mooching relatives also sprinkled in.

With Downsizing, Payne has finally jettisoned these particular tropes, in favor of telling a completely different kind of story that has nothing to do with fat drooling morons from the interior Midwest. And ironically, it’s the worst film he’s made in his career.

Downsizing is am ambitious effort, one that whiffs spectacularly in a way that only the most ambitious efforts can. The film, written by Payne and regular writing partner Jim Taylor, is three radically different movies in its three acts, only one of which is particularly interesting. The first act premise is a clever sci-fi what-if. It’s just that after 45 minutes, the film goes off the rails and stays there.

In the not-too-distant future, scientists in Norway have created a process that allows human beings to miniaturize themselves to five inches tall. This technology is sold as a bulwark against climate change and overpopulation, leading to the possible salvation of the human race. But what attracts participants is something else: “Getting small” makes a little bit of money go a long way, allowing previous working stiffs to live large in complexes full of McMansions.

Paul (Matt Damon) is a workaday schlub in Omaha who decides to take the plunge alongside his wife (Kristen Wiig). But when a key part goes awry, Paul has to figure out how to make do in his new, smaller world. It’s set-up as a particularly smart satire of the Bush-era housing bubble—“one weird trick” to leverage your way to wealth that turns out to have a hidden dark side. But the film doesn’t stick with that premise—instead, the second act becomes a heavy-handed critique of late capitalism. I don’t even want to talk about the third act, which is how far afield it gets from anything resembling the ideas that came before.

Damon, in what would go down as the most listless performance of his career if it weren’t for Suburbicon a few months ago, plays the protagonist, an almost completely passive character. Hong Chau plays a Vietnamese political dissident, shrunken by an oppressive government, while Christoph Waltz overacts as an international playboy.

The film leaves a lot of great ideas unexplored—how did technology get so successfully miniaturized? What happens if a small person and a normal-sized person fall in love? Why didn’t the shrunkenness cause massive unrest among the still-large world?

I guess Payne deserves credit for aiming high, but Downsizing is an unmitigated failure.

Comedy sequels don’t get much lazier than Pitch Perfect 3, as the series limps its way to the finish line with a weak, not particularly funny effort. This is a movie that has absolutely no creative reason to exist.

The original Pitch Perfect, back in 2012, was a roaring success, finally bringing mainstream appeal to a cappella, an art form primarily popular only on college campuses. It cemented Anna Kendrick as a star and Rebel Wilson as a comedic force, and also inflicted the hit single “Cups” on the world. The 2015 sequel was (literally) second verse, same as the first, but the premise had enough creativity left in it, and nobody embarrassed themselves.

That’s not the case with the relentlessly mediocre new film. The Bellas, the celebrated collegiate a cappella group, are now out of college and struggling with their post-singing lives. Due to a series of contrivances, they’re brought along on a USO tour of Europe, where they’re competing with a group of bands for a chance to open for the famed DJ Khaled.

So the stakes are pretty low, and they’re not helped when we realize that in the film’s chronology, the characters are now all around 30, even though most of them were still undergraduates for the previous film, which was just two years ago; most of the actresses are even older than that, including the 37-year-old Wilson.

While several of the Bellas once again have no character traits, two different characters get subplots about their unresolved conflicts with their fathers; Wilson’s dad, played by a smarmy John Lithgow, is an international criminal, leading to an incongruous and unfunny action-movie-blowout conclusion. There’s also the trademark “sing-offs,” although for some reason the competing bands all play instruments.

That’s not all that goes wrong. The film raises major conflicts that it solves with a wave of the hand, starting with whether the Bellas are performing their last hurrah, or pursuing lasting fame.

The previous movies’ male love interests have been jettisoned in favor of nondescript handsome guys, one of whom is named “Chicago” for some reason. Once again, there’s too much of John Michael Higgins and Elizabeth Banks as the TV commentators, who were never more than a witless rip-off of Fred Willard’s character in Best in Show. And funny as she can be, a little bit of Rebel Wilson goes a long way; there’s a reason you never see her much anymore outside of this franchise.

There’s one saving grace: One of the opposing groups in the sing-off competition is a Ruby Rose-fronted girl group called “Evermoist.” Not only is it the movie’s lone good joke, but I’d rather watch a whole movie about Evermoist’s backstory.