The Last Jedi: Watching Star Wars Come to an End

The past does not matter. 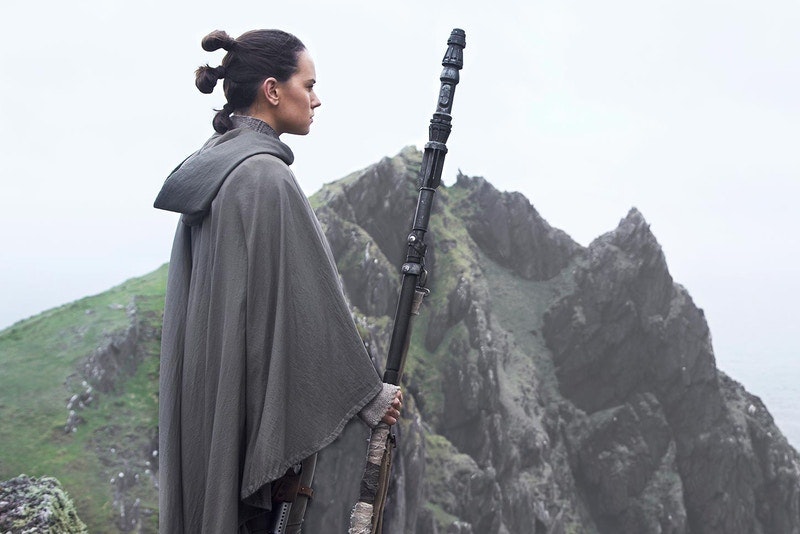 Imagine the scene: Daffy Duck and Bugs Bunny are performing a stage number, “Tea For Two.” As their performance goes along, Bugs gets all the applause, all the adoration. Daffy, meanwhile, becomes increasingly distraught and jealous. Finally, he shoves Bugs off-stage, promising the crowd a spectacle that will blow everything they’ve seen away. He begins by drinking gasoline. Then he produces a bottle of nitroglycerin and guzzles it. He washes that down with mouthfuls of gunpowder. He even swallows weaponized uranium. For his big finale, Daffy lights a match and sends it down the hatch. He goes off like a nuclear bomb, of course. The crowd goes wild.

Bugs Bunny, magnanimous to a fault, runs on stage applauding. “It’s terrific Daffy!” he says. “They love it! They want more!”

By now, all that’s left of Daffy is his translucent ghost. “I know, I know,” he answers. “But I can only do it once.”

It’s one of the most curious, melancholy incidents ever dreamed up on Looney Tunes, and I can’t think of a better analogy for watching The Last Jedi as a Star Wars fan.

Consider what’s become of the principals. Leia Organa is dead (in real life), Han Solo is dead (after The Force Awakens), and Luke Skywalker has de-materialized. What remains of their legacy is embodied in Rey and Finn, two orphans without meaningful ties to the past or a clear path in the present. The First Order has become the most powerful political force in the galaxy.

In some ways, this is a return to the uneasy “darkness” at the end of The Empire Strikes Back. It’s certainly pretty to think of The Last Jedi as the second movement in a potentially endless series of trilogies, all of which begin and end with hope despite a bleak middle passage.

Unfortunately, 10 years from now, nobody will think of The Last Jedi as The First Order Strikes Back. Rian Johnson has made a very long movie with a bonkers disregard for the fundamental rules that govern Lucas’ universe. As a result, it has baffled a lot of critics and made off with undeserved accolades. Let’s keep a clear head and start with what’s not radical; at this point, two movies into the rebirth of Star Wars, we can say a lot about the limits of Lucasfilm’s imagination.

The settings, for example, never change. Deserts incubate the Force: Jakku is another version of Tattooine. Cold climates hide the Resistance, so Crait is the new Hoth. Temperate wildernesses are the cradles of luminous theocracies, from the Jedi temple on Ahch-To (bless you!) to the benevolent Ewok planet Endor. Cantonica, Mos Eisley, and Cloud City are all artificial watering-holes where morally gray characters profit from galactic wars and make wary offers of assistance. The stock characters are sure things, too. Lando Calrissian makes a deal with the Dark Side, and so does Benicio del Toro’s DJ. Supreme Leader Snoke looks like the Emperor, talks like the Emperor, has apprentices like the Emperor, and uses the same kind of intimidating, holographic videochats instead of picking up his phone.

Within these confines are motifs of a higher order altogether. For example, Star Wars characters live and breathe Freud: they all want father figures to guide them, accept them, and (ultimately) die for them. Their mothers are always nurturing, forgiving, and dead (or about to die): the maternal figure in The Last Jedi is Vice Admiral Holdo, who tousles Poe Dameron’s hair and then blows herself up. Their sisters are always forbidden love-interests, so Luke and Leia are reborn as another Platonic pair, Finn and Rey.

There is an intense fear of all sexuality, which is why organic fluids are always a sign of a Jedi in decline: Yoda the swamp thing, Luke the milkmaid. There are dangerous bodily orifices writ large everywhere, from the rosy Pit of Sarlak, that nightmare of eternal digestion, to the hairy Hole of Darkness that tempts Rey inside. There will always be phallic super-weapons (the latest is a “battering ram”), and those weapons will always be vulnerable, since they’re focal points for tremendous male anxiety. (This is why it’s absurd to hold up The Last Jedi as a groundbreaking critique of masculinity. Starting with A New Hope, every Star Wars film has been obsessed with male power, including critiques of it.)

What makes all this bearable is the (genuinely) noble undertaking of all true Jedi: reuniting with a glorious past. The Force Awakens is energized by the search for Luke Skywalker, who once led the Rebellion to victory; similarly, The Empire Strikes Back was glorious because of Yoda’s power, and the source of that power was Yoda’s history as a Jedi master. The greatest quiet moments in Episode IV are all revelations about Obi-Wan Kenobi’s past and its implications for Luke. In Star Wars, the past is always a family drama. Luke starts out as an orphan in the care of his aunt and uncle, then finds a father in Obi-Wan, another in Yoda, and at last becomes the father of himself after reconciling with Anakin. The orphan Rey finds a father in Han Solo and a mother in Maz Kanata, then another father in Luke and another mother in Leia. So far, so good.

Then Rian Johnson enters the picture and everything falls apart. In The Last Jedi, Rylo Ken destroys his ties to the Sith by murdering Snoke, abandons his puerile (but important) obsession with Darth Vader, and sallies forth without anybody to apprentice. That’s radically new. Remember, when Anakin Skywalker joined the Dark Side, he joined the Sith. When Luke redeems him, Anakin rejoined the Jedi, taking his place beside Yoda and Obi-Wan. He was never like Kylo Ren—that is, a man without a creed. While discarding the Sith may seem like a footnote, keep in mind that the only real interest generated by Darth Sidious and Darth Maul in The Phantom Menace was their connection to the Sith. From now on, the bad guys will be nothing more than power-hungry bureaucrats.

Luke and Yoda take it upon themselves to orphan Rey a second time by destroying the Jedi traditions, symbolically contained in the library at the heart of Luke’s temple. If Rey has a spirit link to Yoda, Obi-Wan, and the rest of the Jedi order, we never see it. There’s every reason to suppose that she doesn’t even maintain a connection to Luke, so unlike Obi-Wan’s transmutation into pure spirit, Luke’s death is final. So, of course, is Han’s. Come to think of it, what is the Resistance even fighting for? Freedom? Self-determination? In this cold new universe of orphans with nothing to revere, freedom’s just another word for nothing left to lose.

If there’s a message contained in The Last Jedi, it’s that the past does not matter. That’s secretly how Rey understands Vader’s redemption: because he had Light inside him, his turn to the Dark Side was unimportant. Rey has anonymous parents and “no place in this story,” as Kylo Ren accurately tells her, but it doesn’t matter, because she is strong with the Force. When Yoda ridicules his own Jedi texts and says “page-turners, they were not,” the word “page-turners” does something the Empire never could. It murders Yoda’s venerable ghost with its absurd modernity. Yoda doesn’t talk this way, or didn’t until now… but he can say anything he likes in The Last Jedi, because his antiquity has lost all meaning. Yoda sacrifices his considerable dignity in order to thumb his nose at the past before some orphan beats him to it. Even the heart-stopping raid on the intergalactic casino ends with a whimper, when Rose disavows the quest for vengeance that kept her past close behind.

I realize that Luke Skywalker and Kylo Ren both urge Rey (and, by extension, the viewer) towards a break with old ways. I’m not saying anything about the film’s message that it doesn’t proclaim, in no uncertain terms and on multiple occasions. You can always respond, as some critics already have, that this disregard for the Star Wars sacred cows makes The Last Jedi a work of genius. Problem is, we’ve seen it all before. Kylo Ren may not realize he’s pulling a Darth Vader by ridding himself of Snoke, but we’ve already seen Darth Vader turn on the Emperor when the Emperor least expected it. DJ may not realize he’s Lando Calrissian, but he is nonetheless, as we can all attest. It’s just a matter of time before Armitage Hux is old enough to become Grand Moth Tarkin.

There’s something awe-inspiring in watching the great edifice come toppling down. Vice Admiral Holdo flies in the face of decades of conventional starfighter wisdom when she warps headlong into the First Order’s mothership. It looked amazing, but what you were actually seeing was the end of all those lovely X-wing vs. TIE fighter dogfights. From now on, all space battles will be fought at lightspeed by unmanned drone ships. It’s likewise wonderful to see an orphan who looks like Tiny Tim using the Force on his broom, but it also brings us face-to-face with a (now) frighteningly random birthright.

You can destroy, in two and a half hours, what it took Lucas decades to create. Perhaps Luke Skywalker is right, and it really was high time for the Jedi to end. Anyhow, this is a stunning and death-defying car crash of a movie, and Star Wars fans cannot help finding it riveting. But I know more Star Wars movies are on order, and there’s the rub. Even if, in its own reckless way, The Last Jedi was terrific, now the whole galaxy is over. Something got lost when Luke’s library burned down. It was a great trick, Mr. Johnson. But you can only do it once.