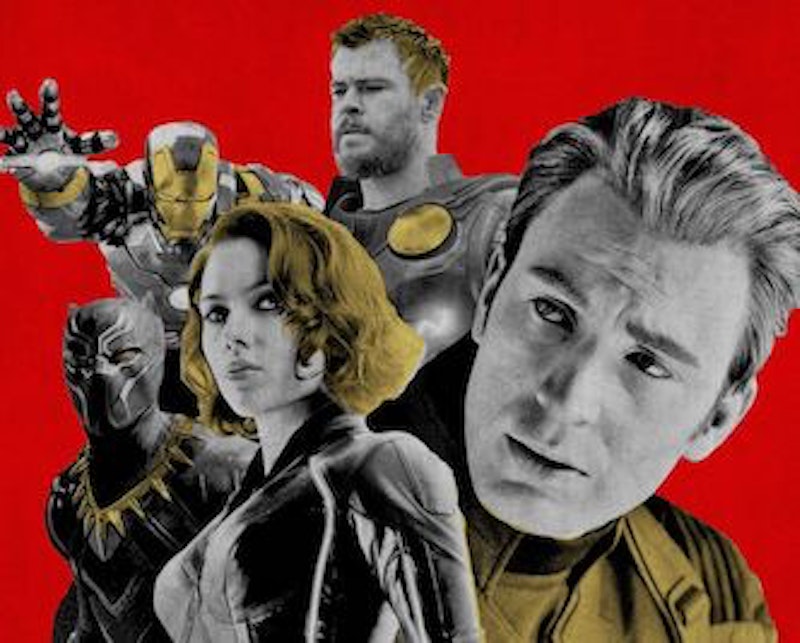 Clint Barton (Jeremy Renner), home detention device firmly clamped on ankle, gives his daughter an archery lesson she doesn’t need. His sons play nearby; his wife (Linda Cardellini) is almost done fixing the family a meal. A Traffic tune choogles over the soundtrack. This is how Avengers: Endgame opens—not with a bang, but sun-kissed, pastoral, a dream. Lulled, you buy in, because you’d been wondering where Hawkeye was—perhaps, like me, you’re one of a perhaps a thousand Marvel Cinematic Universe fans who sees this character as something more than a joke—and because it’s impossible to be sure when this is happening.

For a moment or two, something dawns on you: Barton won. He’s out. This is the prize. Thanos’ Infinity World round-the-cosmos-snap missed these folks. Then, slowly, Barton’s family starts dissolving into ash. He doesn’t understand why, or what’s happening, and he cries out to them like a small boy calling out for Lassie after she’s wandered out of sight range. The camera draws away from this rural tableau, and the full weight of this comic book conceit is suddenly too real for the first time—no one’s in costume, no one’s flexing muscles or baring teeth, there’s no battlefield. Ordinary people are there—and then they’re just fucking gone.

The remaining three hours of Endgame alternate, confidently, between the contemplative, the amused, the heavy, and the footnoted. The end of an MCU chapter is firmly punctuated with flair, as MCU honcho Kevin Feige and co-directors Anthony and Joe Russo corkscrew this crossover, unpredictably. There’s a hard-charging Act of Vengeance, a Kinda-Disassembled Half-Decade of Defeat, an entertaining string of Back to the Future 2 time-heist remix shenanigans, a betrayal, a clapback, a final showdown that may elicit involuntary utterances, the sorta coincidences and contradictions you’ve gotta just roll with to let the totality of a capstone flick like this move you to the brink of tears, or just move you.

The screenwriters pause to remind you—obnoxiously or nobly, perspective depending—that there was or is a comic book services featuring only female heroes. Characters live, die, live, change, cameo. Hulk winds up looking a lot more like Mark Ruffalo this time out. Black Widow (Scarlett Johansson) shrugs into international heroic middle-management. Thor (Chris Hemsworth) goes brew Lebowski. War Machine (Don Cheadle) is revealed as a sci-fi movie buff but also kind of a dick. I’m not sure whether Nebula (Karen Gillan) is actually transformed, but she’s happily front and center, key to the story here.

And throughout, one is reminded anew of the raw power of cash money on hand—John Slattery! Rene Russo! Robert Redford! Tom Hiddleston! Yvette Nicole Brown?—even as Endgame pays off decade-plus old storylines and sets up future movies and rumored Disney+ shows. Chris Evans has long been these movies’ staunch, marquee mark as Captain America, while Iron Man—or, specifically, Robert Downey Jr.—stumbled from wisecracking series Pied Piper to fully-vested athleisure gadfly asshole. As of this movie, though, they’re both out, and as such they bring it at an Olympic level. Endgame gifts these veterans meaty scripts and personal lives, albeit with limits and conditions, and ultimately gives the audience all (or almost all) of its heroes, heroines, and side characters back to play with, to slash-fiction to infinity and beyond. (Prizes, all around.)

This is the cherry on top of 22 great movies, and for a populist entertainment, it’s satisfying stuff—well-paced, peppered with quiet, contemplative moments like its opening, possessed of a gravitas I wasn’t certain these movies could achieve. And the MCU will soldier on, of course; commercial bravery would mean shuttering the MCU right now, but, you know, shareholders. And, you know, you. You’re salivating for a Fantastic Four flick finally done right just as much as I am.