Suffer Through Her Smell

Alex Ross Perry proves himself the most untalented and pretentious filmmaker working in America today. D- 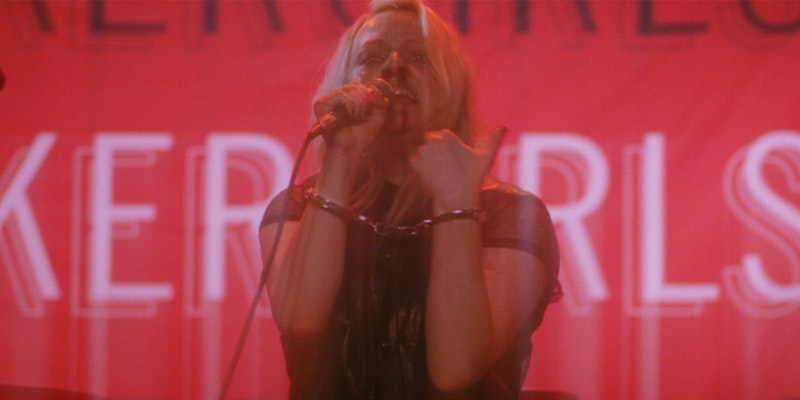 Is there a worse working filmmaker than Alex Ross Perry? His latest, Her Smell, is a worthless and pretentious waste of time—135 minutes! The gall of this guy to stretch an incomprehensible Behind the Music imitation longer than two hours. At least he had some humility and self-awareness when he kept his last film Golden Exits to 94 minutes. I liked that movie, but my brother had a violent reaction to it when we saw it at the Maryland Film Festival in 2017, pounding the pavement outside the Parkway screaming about dull Brooklynites, aimless hipsters and lecherous men past their prime pursuing peacocks in chi-chi nightclubs and dive bars.

I enjoyed Golden Exits because it looked good: somehow Perry is able to afford shooting on film. Her Smell is a pretentious mess, a word I almost never use because of how often it’s misused as a catchall cudgel by people too stupid, uninterested, or impatient to engage with art they don’t understand. But with Her Smell, Perry proves himself the least interesting filmmaker in America today.

This is a great example of why most movies about fictional rock bands don’t work: without the music, the drama is worthless. How am I supposed to care about the ups and downs of a Courtney Love knock-off (played by Elisabeth Moss) if all of her songs are shit? Hole, Nirvana, Soundgarden, The Smashing Pumpkins, Green Day, Pavement—take your pick of the early-1990s alternative bands Her Smell is modeled after. They sold millions of records and rocked a billion faces because they had amazing songs. This is why Velvet Goldmine sucks and I’m Not There is great. The backstage chaos of any artist is only interesting in relation to their work. Otherwise, all you’re left with is a story that’s been told too many times before: euphoric rise, sophomore slump, internal dysfunction, drug problems, acrimonious break-ups, semi-triumphant return.

The fictional band in Perry’s film, Something She, is clearly a stand-in for Hole, but besides the mild histrionics Moss pulls out behind the scenes, they have absolutely nothing in common. Moss’ character is a pale imitation of Love, a genius in her own right and still slandered by sexism and underrated by those who’d rather credit Kurt Cobain for writing Live Through This, her greatest achievement, and even worse, insist she had him murdered so she could live off the fat of her husband’s accomplishments once it was clear he was going to leave Nirvana and go off to make chamber music with Michael Stipe and paint in seclusion. It’s a tragedy he never made it past 27, but Courtney didn’t do him in. She deserves a critical reappraisal, and I fear she won’t get it until she’s dead.

Bully wrote the songs for Her Smell—my brother is a big fan, but even he agreed that they were passable pop-punk at best, and nothing more than three-chord filler tailor-made for actors who couldn’t be bothered to learn how to passably mime playing the guitar. This is what I mean when I say Perry is a pretentious filmmaker: he stretches a five-part episodic film to 135 minutes without offering a morsel of context or compelling work coming from the people we’re forced to watch argue and bitch about each other and relapse and waste studio time.

It’s wasteful and arrogant with nothing to show for it, unlike so many wonderful albums and bands that justify the length and excess of their work: Tusk, Gaucho, Sign ‘o’ the Times, Mellon Collie and the Infinite Sadness. I wasn’t so hot on the new wave nostalgia sing-along Sing Street in 2016, but it kept my attention because it featured actual pop songs—pop songs I don’t even particularly care for! But I’d rather watch a movie filled with Pat Benatar and Foreigner songs than dog shit like Her Smell.

The film’s only redeeming section is its fourth section, Moss’ character at home, “in recovery,” a year sober, hanging out with her daughter. She plays her daughter a song on the piano in one unbroken take, and it’s the best scene in the movie: not only because Moss can play the piano, but for once, we get a glimpse—and again, just a glimpse—of the talent this character allegedly possesses that justifies all of the chaos and action around her.

The rest of Her Smell takes place in hurried, fraught, and claustrophobic environments: 20 minutes to show-time and Moss hasn’t shown up yet, or she’s already wasted, or can’t pull it together for a studio session and pisses her manager’s time and her label’s money away minute-by-minute. Another problem throughout the film is Perry’s insistence on shooting handheld tight close-ups, roving between a dozen people bickering in a room passing off insults and passive aggressive jabs that we have no context for and can’t understand.

There’s no payoff or relief from any of this anonymous drama because there is no “Doll Parts” or “Miss World” or “Asking for It” or “Violet” for the movie to revolve around. Billy Corgan giving Courtney Love time out of the Pumpkins’ set to perform “Doll Parts” by herself at Lollapalooza only four months after her husband died—if you know how loaded that situation was, you know you could make a compelling movie out of that one night—as long as you have the rights to all those songs. Even last year's A Star is Born made fine trim out of the most cookie cutter career arc imaginable because the songs were fine and its characterization was competent. Her Smell is incoherent in comparison, a bunch of beautiful people brooding and worrying and screaming—about what exactly? Why should we care? I don't.

Someone needs to confiscate Perry's cameras and ban him from using celluloid to shoot his horrendously empty movies ever again. Don’t just avoid Her Smell—spit on the posters and scream in the theaters, interrupt screenings and prevent it from being shown. People talk about “Justice for Kurt,” but what about justice for Courtney? She deserves better than this clueless, preening simulacra.