A near-spoiler-free look at Marvel and the real world. 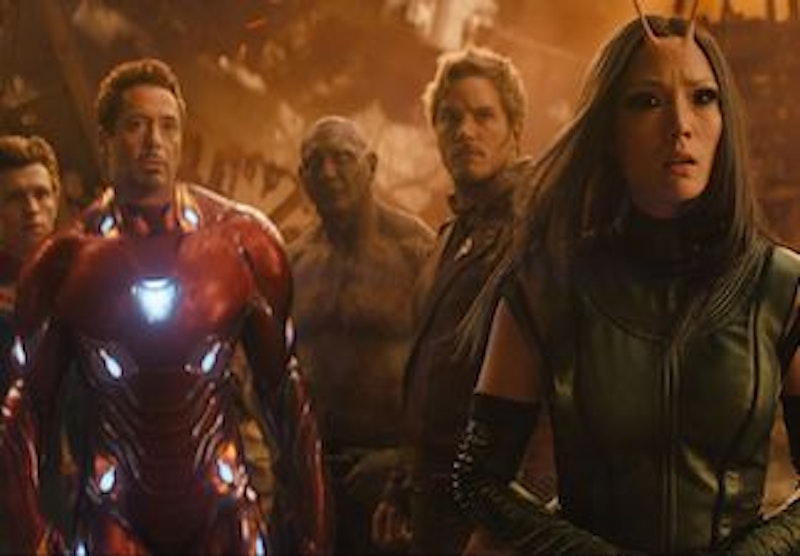 I don’t think it’s a coincidence that the world-decimating bald super-villain Thanos, with his helmet off, looks like Marvel Studios president Kevin Feige. The animators probably tell him it’s a loving homage—and he’s doing a fantastic job, as all nerds know—but they must fear him as well.

Now that he’s gathered all the Marvel characters’ film rights under one studio (save for some Spider-Man secondary characters still at Sony), he can soon admit to fans what they didn’t want to hear during the protracted Disney-Fox merger: Marvel Studios has so many hundreds of characters at its disposal now that it doesn’t have to use the X-Men or New Mutants or Fantastic Four—or even the main six Avengers—again for years after 2019 if it doesn’t feel like it. That also means it doesn’t have to worry about paying big money to retain actors who get too big for their britches. Go ahead and leave, Marvel will make more!

The main strategic advantage for Marvel, then, to Disney absorbing part of Fox this year is just the classic hostile-takeover-like power to shut down a former rival. You don’t want to come right out and tell fans you’re capturing the X-Men so you can kill them, but (after this year, and for at least a while) that’s what it amounts to. As Feige has wisely admitted, they can only fit three or four superhero movies like this past weekend’s Avengers: Endgame into a year’s release calendar anyway, and they already have several Avengers-related projects percolating without adding any X-mutants to the mix. No pressing need to revive Channing Tatum’s planned movie about the Cajun mutant superhero Gambit, etc.

You might say that Feige looks a lot like a villain who’s calculating enough to kill half the inhabitants of the universe in order to make the other half flourish. Not that I’m saying he’s wrong.

It won’t be complete carnage. Deadpool is rumored to return. Everything will get used eventually. For now, though, maybe our best hope of seeing some fresh ideas is not the long-imagined blending of a dozen different familiar superhero teams but, on the contrary, the aggressive sidelining of the Fantastic Four, X-Men, New Mutants, original Avengers, Inhumans, Defenders, SHIELD, and Asgardians. It’s a good time to dig deeper instead of just mixing and matching the obvious. I’m greatly looking forward to that rumored Eternals movie with Angelina Jolie plus Cameron Britton as gay Hercules and maybe Kumail Nanjiani as Kang the Conqueror. Yes, bring on the obscure characters and new actors, I say (even though there were enough temporal ambiguities in Endgame to resurrect a couple characters who look doomed at first glance if they really want to, say no more).

And I won’t pin my hopes on seeing the same directors again, either, since word has it the Russo Brothers who directed Endgame (and before it Winter Soldier, Civil War, and Infinity War) will be off at another studio, MGM, helping to guide several remakes we probably don’t need, includingThe Thomas Crown Affair, The Secret of NIMH, The Pink Panther, Poltergeist, and, yes, It’s a Mad Mad Mad Mad World (which will require a cast about the size of Endgame’s).

About now, you may be thinking that not only do we not need all those remakes, maybe we don’t need superhero comics adaptations either. To which I can only say, if these modern myths were not important keys to the human psyche, would the CIA have had a recruiting table at a major comics convention this weekend?

I was also not surprised that the official CIA Twitter account tweeted out its enthusiasm for Marvel’s Black Panther during the recent Oscars, either. With that film being the first outside fare shown in Saudi theaters in decades—and revolving around an outward-looking new prince partnering with a CIA agent to save his kingdom—you have to suspect the agency may have had a hand in producing or promoting the film from the get-go, as I’ve noted before. If it inspires a few additional Saudi citizens to think, “Beheading gays doesn’t seem like something Black Panther would do,” maybe it’s all worth it. (But never forget SHIELD is Hydra and Hydra is SHIELD.)

As this history paper details, U.S. intelligence agencies have a long history of using comics for propaganda purposes, and over at DC Comics, former CIA agent Tom King is one of the most popular writers lately, with a special flare for characters who’ve been traumatized by perpetual combat. Much as I love these stories, I have to admit that after a few hundred more of them, we may all be battle-weary enough to be ripe for reprogramming and/or battlefield deployment. In the meantime, obviously I’ll watch Endgame a second time.