The new feature film, while it doesn't shed much new light on the J.T. LeRoy story, nevertheless works as a character study that's buoyed by a pair of strong performances. B+ 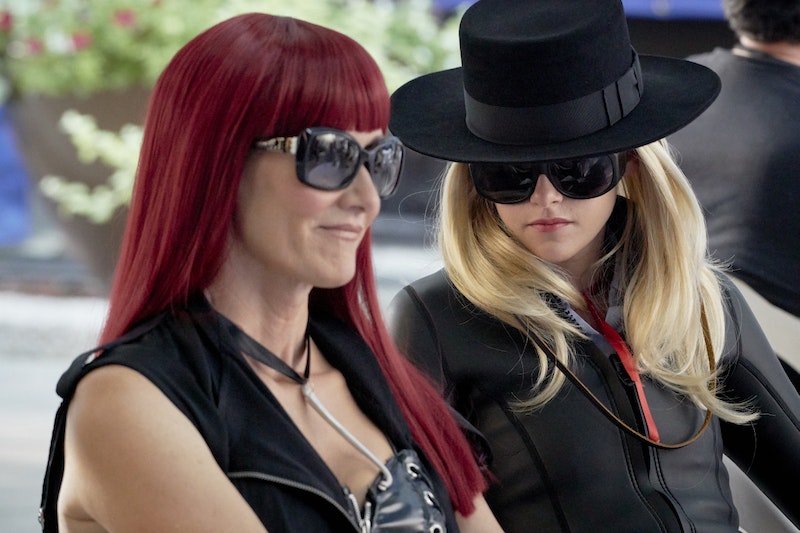 It's hard to imagine a real-life story from the past 25 years that's more well-suited to a strange indie movie than that of J.T. LeRoy.

LeRoy was a New York literary sensation in the late-1990s and early-2000s, writing books of essay collections about his life as a young male prostitute at rural Southern truck stops. LeRoy also wrote for New York Press, under the editor of this website.

Befriended by celebrities despite his reclusiveness, and sometimes making appearances at Manhattan book readings without speaking, LeRoy was eventually exposed as a bogus literary persona, with Laura Albert doing the actual writing and interviews, and Albert's sister-in-law Savannah Knoop portraying Leroy in public, usually behind a blond wig, oversized sunglasses, and the sort of top hat that Slash used to wear on stage. Albert also adopted a supplementary persona, of LeRoy's British publicist "Speedie."

The story has been told on film before, in at least two different documentaries from the points of view of different people in the saga, and there have been episodes of Law & Order: SVU that were based on aspects of the LeRoy tale. The new feature film, while it doesn't shed much new light on the LeRoy story, nevertheless works as a character study that's buoyed by a pair of strong performances. When it comes to literary hoax movies, it's a strong entry, even if it's nowhere near the level of last year's amazing Can You Ever Forgive Me?

The Knoop character, likely due to the source material, is at the center here. Kristen Stewart plays Knoop, who was brought into the scheme by their sister-in-law, Albert, who’s played by Laura Dern. (Per a rep for the film, Knoop uses they/them gender pronouns.) Stewart's androgynous energy, in particular, is a perfect fit for the material, and it's yet another winning turn for the actress.

Knoop/LeRoy was also known to have had a relationship of some sort with Asia Argento, the Italian actress who has popped up again and again, Zelig-like, across various scandals in the last few years. She was dating Anthony Bourdain at the time of his suicide, was a Harvey Weinstein accuser, and was later herself accused of perpetrating #MeToo crimes.

Argento directed and starred in a movie, 2006's The Heart is Deceitful Above All Things, based on one of LeRoy's books, and she was later accused of inappropriate behavior with Jimmy Bennett, the actor who played her son in that film.

Diane Krueger plays the Argento-like character—albeit, with a different name, and German instead of Italian—while Courtney Love, who really did befriend "Leroy" over the phone, appears as a Love-like character. In one of the LeRoy documentaries, tapes are played of Love doing cocaine while on the phone with her literary friend.

The film argues, somewhat convincingly, that the scheme wasn't so much an elaborate hoax for fame and money, but more a creative outlet and therapy exercise that spread out of control as it gained widespread public attention. As long as we’re making so many films about the LeRoy affair, one angle I’d like to see explored is the journalistic one, possibly based on reporter Stephen Beachy’s breaking of the story in New York magazine in 2005—as well as a look at the question of why unraveling this tale somehow took almost 15 years.