But who plays Donald Trump? 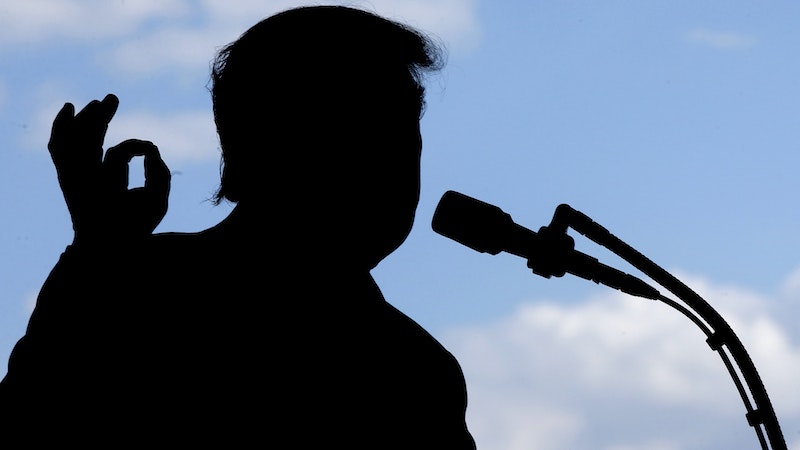 In upcoming years, the Trump presidency is going to lead to a lot of movies. Some will be very good, and some very bad. Who should play Trump? I’m ambivalent, as long as it’s not Alec Baldwin.

Here’s a look at the Trump movies I think we’re going to see, ranked from how much I’m looking forward to them:

—The farcical political comedy. This is a time of constant absurdity, so what I most want to see is a biting, satirical comedy that finds a way to convey just how odd things are. Think of the Coen Brothers’ Burn After Reading or, better yet, Armando Iannucci’s In the Loop. The kind of story that conveys how a combination of cowardice, careerism, and pure evil can lead to terrible outcomes.

There are many places to go with this: How about Michael Cohen’s story, in the style of Soderbergh’s The Informant? A near-real time chronicle of Anthony Scaramucci’s week-plus in the White House? A horror movie about Steve Bannon and/or Stephen Miller?

The underrated Our Cartoon President, on Showtime, hits on this at times. There’s already a TV series in the works based on Michael Woolf’s Fire and Fury, and that could be what we want, provided it nails the anything-goes nuttiness of that book (and I hope Fred Armisen plays Woolf again.)

As for a film about it? Whoever makes this film must be up to the task, and deliver something that doesn’t miss. No “Drumpf.” No “covfefe.” None of that weak-ass Borowitz crap. Iannucci may have left Veep, but he’s clearly the man to tackle this.

—Mueller: The Movie. The inside story of Robert Mueller’s investigation, presented as a thriller, with an older actor of gravitas (Tom Hanks?) playing the special counsel. The villains can be the entirety of the House Intelligence

—The Heroic Journalists movie. The inspiration, of course, is All the President’s Men, and its pseudo-prequel The Post: A movie about the (eventual) downfall of Trump’s presidency, in which the Trump figures are entirely off-screen and the subject of the movie is the reporters who brought it down (or failed to do so.)

I’m guessing we’ll get multiple versions of this, some better than others. I’d love to see a chronicle of David Farenthold’s Pulitzer-winning work for The Washington Post during the campaign, which exposed Trump’s massive charitable fraud, but… failed to actually bring about the candidate’s defeat. Ryan Gosling could put on glasses and play him. I do know that, by the time all is said and done, Mary Louise Parker will play Maggie Haberman in a movie.

—The Marina Butina story. We’re probably going to see lots of films about the various aspects of Russian intrigue, and one landed in the news last week: A built-in, real-life spy thriller, about an attractive female Russian spy who successfully infiltrated the NRA and conservative political circles. It might not be the most compelling story of the Trump era, but knowing Hollywood I’ve got a feeling it’s headed to the screen first.

Everyone’s comparing the Butina tale to the recent Jennifer Lawrence film Red Sparrow, but Butina’s story is far more interesting than that. She looks more like a Brie Larson, or maybe Shailene Woodley.

—“Kanye and Trump.” Remember Elvis and Nixon, the fictionalized telling of that 1971 White House meeting that came out last year, more than 40 years after that fact? Like that, only about Trump and Kanye’s Trump Tower meeting during the presidential transition.

—“Oliver Stone’s Trump.” The ultra-serious, three-hour Trump White House years biopic, made by a smug liberal director and starring a smug liberal actor, determined to “get inside” Trump and what makes him tick, before concluding that everything traces back to his mother, or maybe his father. Best case scenario, it’s Oliver Stone’s Nixon; worst case scenario, it’s Stone’s W.

—“Dinesh D’Souza’s Trump.” The smug right-wing version of the Stone version, whether it’s a documentary or a docudrama. Remember the Bush hagiography DC 9/11? It’s not something I have any interest in seeing.

—The smug anti-Trump documentary. This is a movie that we’re likely going to get about 25 of just in the next few years. Michael Moore is making one, and I’m sure Alex Gibney is making seven. You know what it’ll be: very concerned narration. Ominous music. A URL at the end showing what YOU can do. And throughout, absolutely no attention whatsoever paid to skillful filmmaking or storytelling. Welcome to the next five years of Oscar-winning feature docs.

—Trump Country: The movie. You know those frequent, terrible New York Times and Washington Post stories where the reporter goes to a depressed Midwestern town that went 90-10 for Trump, and everyone there gives convoluted, vaguely racist explanations for why they’re Still With Trump? The movie version of that. Directed, presumably, by Alexander Payne.