Before we had strong female action heroes, we had Cat Ballou. 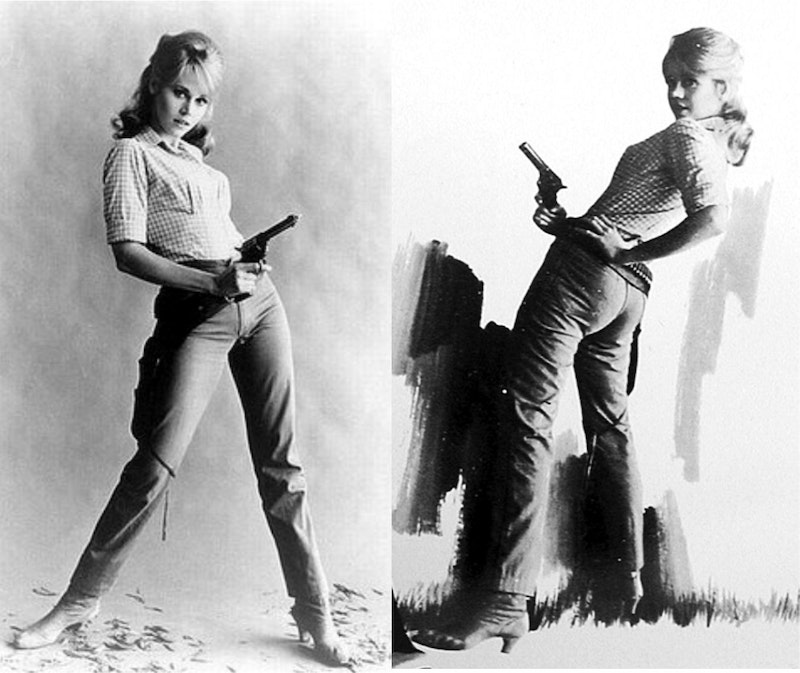 This is part of a series of posts on 1960s comedies. The previous post on Mad as a Mars Hare is here.

These days you can't fire a bullet without getting rapidly and painfully disarmed by a strong female character with a skintight leather costume and wicked judo skills. Buffy, Black Widow, Wonder Woman, Villanelle, Lisbeth Salander, Lara Croft, Trinity—women still don't get to headline as many action franchises as men, but when they do they're likely to wreak as much havoc as their male counterparts, except with fewer clothes and in higher heels.

Female action heroes are so ubiquitous that it's easy to forget they weren't always so prevalent. Emma Peel was an innovation, and it took a while for her to catch on. In 1965, when Cat Ballou was released, the idea of a woman punching, kicking, and shooting her way through a narrative was still unusual. So unusual that it was a joke.

Cat Ballou is a comedy Western. Cat Ballou (Jane Fonda) a prim, fresh-faced schoolteacher, is caught up despite herself in a standard Western narrative. Bad men want the ranch of her father, Frankie (John Marley), and harass and eventually murder him to get it. Swearing revenge, Cat organizes a ragtag band of petty thieves and hangers-on to rob the payroll of her enemies.

The film is no Blazing Saddles; its mockery of Western tropes is gentle and tentative. The main joke, such as it is, is that the protagonists aren't competent and courageous the way heroic protagonists should be. The hired gun who’s supposed to save them all, Kid Shelleen is a hopeless drunk. Lee Marvin as the Kid turns in a scene-chewing performance with a giant slab of ham, staggering around the screen, limbs flailing, as he slurs, mutters and masticates his lines. The director, Elliot Silverstein, obtained a trick horse, and there's a repeated gag where Shelleen half falls off his mount and is dragged around sidesaddle. Marvin won an Oscar for the role, and for playing Tim Strawn, the villainous plastic-nosed bad guy who shoots Cat's dad. It's hard to figure out what the Academy was thinking.

Shelleen's incapacity is supposedly funny. But so is Cat's. In an early scene, she's caught smuggling a trashy Wild West novel inside her volume of Tennyson. She looks demure, pristine and innocent, but she wants adventure. In a contemporary film, that adventurous streak would probably be validated and celebrated; the movie would be about her becoming the daring righter of wrongs she dreams of. But this is 1965, and delicate leading ladies don't turn into daring gunslingers. When they try, it provokes snickers.

Cat watches her dad killed in front of her, which hardly seems funny. If Cat was a guy, her grief and rage would be serious business, as in The Searchers or the contemporary (almost entirely womanless) Sergio Leone Spaghetti Westerns. A woman swearing revenge, though, is odd and amusing. Cat's desire to destroy the men who murdered her father is presented as a kind of petulant tantrum. In one outburst, she screws up her face, stamps her feet, and throws rocks at her gang because they won't help her rob a train. At the end of the film, she sneaks into her adversary’s luxury train car, posing as a prostitute. She means to force him to sign a paper admitting to his misdeeds, but he doesn't take her seriously, certain that she doesn't have the guts to shoot him. And he's right; she doesn't. The gun goes off accidentally. Cat never gets to be that kickass action hero; she's always the confused innocent, big doe eyes wide, mouth open in fetching confusion, trying to be something she's not.

Westerns often contrast the rugged hero, avatar of lawlessness, with a pretty teacher, who represents creeping civilization. Characters in Cat Ballou talk sadly about the end of the Wild West and the era of gunfighters and violence. This is presented as something of a tragedy, but also as farce. The west is so domesticated in this film that even the villainous bad guy is a schoolmarm. The rugged masculine outlaw is a woman, which means she's a parody. The Wild West ends when they let the women in the saloons.

These days, again, every saloon on screen comes complete with a female karate expert waiting to kick some guy in the balls. The fetishization of strong, sexy women can get wearisome too—and as Tasha Robinson has pointed out, even those strong women are often just foils to show off the competence of some stronger man. Female representation in Hollywood remains fairly crappy. But Cat Ballou is a reminder that, not so long ago, it was even worse.