It’s a jukebox musical, but so what? B+ 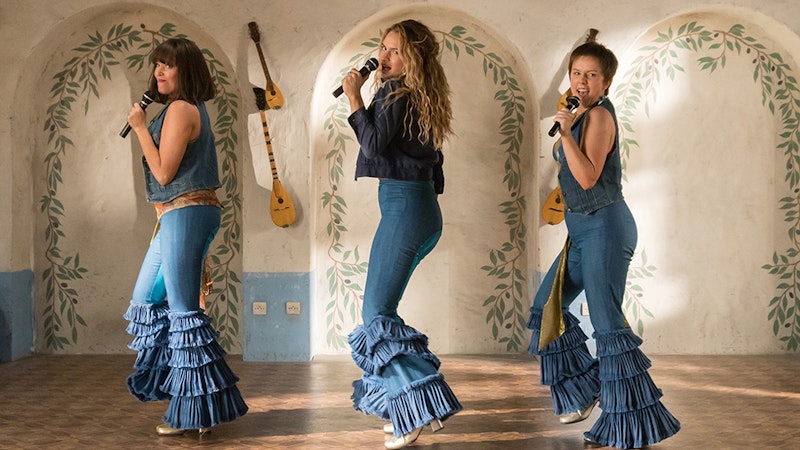 Mamma Mia: Here We Go Again is considerably better than a 10-years-later sequel to a screen adaptation of a Broadway jukebox musical ought to be. It’s a film that knows exactly what it is, and succeeds completely on those terms.

The original Mamma Mia, based on the Broadway smash of a few years earlier, had a simple conceit: a group of likable actors, acting out a wispy plot on a scenic, sunny Greek island, as they sang and danced to the catalog of the 1970s pop stalwarts ABBA. The film starred Meryl Streep as a mother preparing for the wedding of her daughter (Amanda Seyfried), who secretly invites all three men (Colin Firth, Pierce Brosnan, and Stellan Starsgard) who could be her father.

In the sequel, a decade later, Streep’s character, Donna, has died, but Seyfried is preparing to turn the island into a hotel, as a tribute to her mom’s legacy. So the film uses a structure that’s borrowed straight from The Godfather Part II: It goes back and forth between the contemporary story and a flashback narrative, set in the late-70s and depicting the younger days of and backstory of Streep (played by Lily James). We see events only hinted at in the original film, most notably Donna’s successive affairs with the three would-be dads.

The ABBA songs are there too—now set in the same time period when they were first popular—and while some of the highlights (“Dancing Queen,” “Take a Chance” and the title tune) are repeated, the film also has to dip a bit further into the catalog this time. But if you were wondering why “Fernando” was left out of the first “Mamma Mia,” I have some wonderful news.

The film’s structure fudges the time a little bit—Amanda Seyfried is neither 40 years old, and can’t fake that she is, and the cast is overstuffed, with not enough time to service every character. But the film has such a joyful energy that it never bothered me.

In Here We Go Again, the wonderfully-named director Ol Parker (the husband of Thandie Newton) does a capable job juggling a huge cast, which includes two different versions of several of the characters. The highlights are the two female leads—Seyfried, who’s made a welcome comeback this year between this and the very different First Reformed, and James (from Downton Abbey and Baby Driver) who’s luminous and magnificent as the younger version of the first film’s protagonist.

Meanwhile the “three dads” are back, although anyone who remembers Brosnan’s unfortunate singing in the first film will be glad to know he doesn’t get any solos this time around. None of the actors playing the younger versions of them make much of an impression, but I loved the stage actress Jessica Keenan Wynn, in her first film, doing a dynamite impression of Christine Baranski as the flashback version of Baranski’s horndog best friend character.

And then, at the film’s 11th hour, Cher shows up, as Seyfried’s long-estranged grandmother. It’s brief, but she makes a hell of an entrance, and sounds fantastic. The movies have missed Cher.

A lot of purists hate jukebox musicals. This isn’t exactly Sondheim, and there’s no real attempt to tie any of the action to ABBA’s history, or to make the lyrics fit the themes of the plot in more than a cursory fashion. But it’s never glaring enough to spoil the fun.