When the talking stops. B 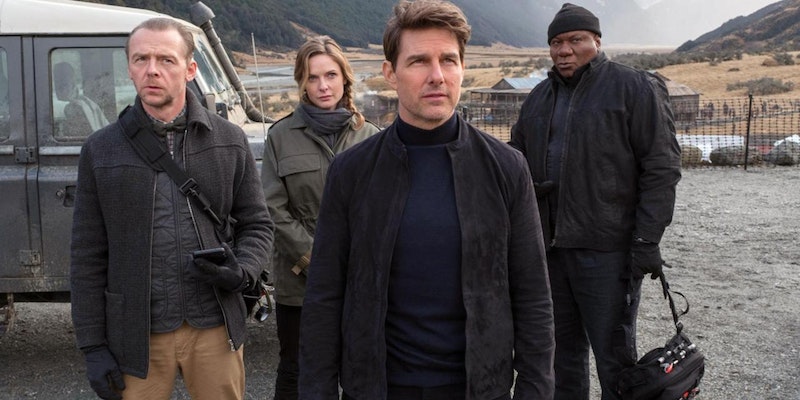 Mission: Impossible—Fallout is fun and likely the best action movie of the year, and yet at the same time a step down for the Mission: Impossible series after it hit a new surge of energy with Ghost Protocol and Rogue Nation. This installment still boasts intricate, impressively stunted, and mostly CGI-free action scenes, but it’s lost its grip on keeping them tight. That sagginess is an infection delivered right from the plot, overly busy and entirely misaimed in its conviction that it can build significant empathy for Tom Cruise’s lead or say something about spy work.

Here’s the thing about Cruise’s Ethan Hunt: Showing him grunt and sweat his way through these movies’ ridiculous giant set pieces does more to humanize him than any amount of pontificating on the nature of his job or personal life. No one watches these movies to question his ruined work/life balance. Picking up a thread from Rogue Nation, Fallout makes as its focus being Hunt. Every plot turn is built around the question of “Where’s this guy’s head at?” Rival agents question his loyalty or sanity, enemies muse on his drive, and his friends and allies are primarily concerned with their own faith in him, almost as if they are characters in a religious film, with Cruise taking on the role of God. The movies have always been about Cruise, but that was fine when it primarily concerned watching him defy death. Hinging the story on it is just wearisome. I don’t care about how Hunt’s job has kept him from his true love, go jump off something high up again!

In general, action blockbusters that get too elaborate with the bits between fighting or chasing (which exist solely to justify and set up the fighting and shooting) are the ones that falter. In this one, there are three nuclear devices out in the wind thanks to a pathetically dumb early move by Hunt. After them are agents of the Syndicate, shattered in the previous film, whose imprisoned leader Solomon Lane (Sean Harris) also comes back into play. Enigmatic MI6 agent Ilsa Faust (Rebecca Ferguson) again returns as a sometimes-ally sometimes-antagonist to Hunt and his team. And tracking Hunt’s every action is CIA behemoth August Walker (Henry Cavill), tasked with keeping an eye on him after the aforementioned dumb move.

In the race to recover the nukes, there are double-crosses, deceptions and intense conversations aplenty, but besides one fun scene of an elaborate sting, no one’s going to leave the theater talking about that. They’re going to be enthusing over a breathtaking HALO jump. Or a brutal, glass-and-porcelain-smashing brawl in a restroom. Or a harrowing duel between two helicopters (for which Cruise, of course, learned to fly a helicopter). Even as this series starts to stagger under the weight of its main character and his actor, the ambition of its action only grows.

Fallout is made of speed and force—people falling and charging and racing—and it finds its thrill in ducking and maneuvering, like a driver you’re sure is going to crash, but who swerves around every obstacle. This is an action movie in three dimensions without any 3D, with fights and chases through the air or going from the street to the sewer or a tower in a single beat. This is the action movie as a symphony of movement and framing and cutting and sound work. There are some stutters; major sequences in Paris and London drag on too long, becoming exhausting instead of exhilarating. Even the climax feels overstuffed in parts. But the cumulative rush makes it a big-screen must.

I’m not reflexively against CGI-heavy action, but the tactile work in Mission: Impossible—Fallout is gratifying nonetheless. Whenever the movie has the decency to hunker down from big questions about Tom Cruise and just let him do his thing, it’s without peer.