The Emotional Roller Coaster of Sorry to Bother You 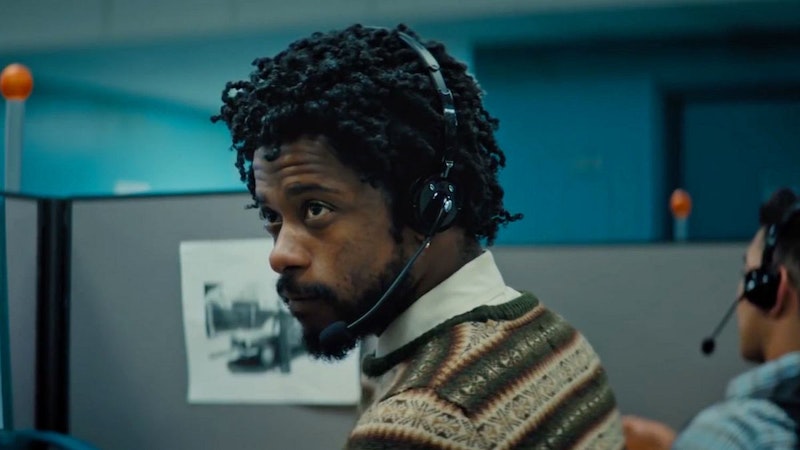 Sorry to Bother You, the ambitious first feature written by Boots Riley, merges dystopian political satire, creature horror, science fiction, after-school-special romance, and a new kind of Black Surrealism we’ve been seeing with Get Out or Atlanta. The amount of genre crossover is dizzying, and while not seamless or consistently coherent, it contributes to the insane fever pitch the move explodes into over its duration.

The film takes place in Oakland and San Francisco, and unsurprisingly, much of the over-the-top satire attacks the inhumane and bleak business environments of current day Silicon Valley (and I guess, the “disruptive” industries of America at large). There are constant ads to join WorryFree, a neo-feudalistic campus where workers dressed like Minions are provided four-to-a-bunk beds and food in exchange for an absurd lifetime contract to work (Not very far off from the live-and-work campuses proposed by Google and Facebook).

I couldn’t avoid the prescience of this film. The day we saw the film was Amazon’s so-called “Prime Day” promotion—a huge sales day for the e-commerce behemoth. Union factory workers across Europe, primarily in Germany and Spain, went on a one-day strike to protest the corporation’s notorious labor practices. Timing employees’ bathroom breaks (not to mention forcing delivery drivers to piss in bottles on their routes in order to make all deliveries), paying factory employees wages below the poverty line, and setting impossible production quotas all contribute to worker burnout and accidents. The National Council for Occupational Safety and Health recently reported that Amazon was one of the most dangerous places to work, with seven factory worker deaths since 2013.

Armie Hammer plays the perfect Jeff Bezos douchebag CEO stand-in: absolutely unsympathetic to the (literally) dehumanizing treatment he submits his workers to in the name of efficiency and profit for his shareholders. The acting in Sorry to Bother You is one of the film’s strong points. Although the script sometimes feels a bit woody, the excellent performances of Lakeith Stanfield and Tessa Thompson, and the cameos of Terry Crews and Danny Glover, really carry the film.

Sorry to Bother You isn’t a cohesive movie, but the unrelenting chaos may be what separates it from the list of references peppering others’ impressions of the film. It contains elements of the surreal hilarious-but-depressing dystopia of films like Brazil, Idiocracy, Repo Man, and They Live. American racial satire à la Putney Swope or Get Out. Body horror reminiscent of Cronenberg. But mixed with some sincere and superficial political messages, the serious reality of our post-Occupy police state, and some run-of-the-mill romance drama, the film feels unhinged and at points, uncomfortably claustrophobic.

While the scatterbrained pacing screams “directorial debut,” the anarchy of themes and tropes makes this film worthwhile. I haven’t experienced such a bipolar rollercoaster of emotions at the theater like this in a long time. Always hilarious, very depressing, and with a batshit crazy third act—Sorry to Bother You is an original take in the Trump era.