A movie that’s simultaneously hilarious and heartbreaking. A- 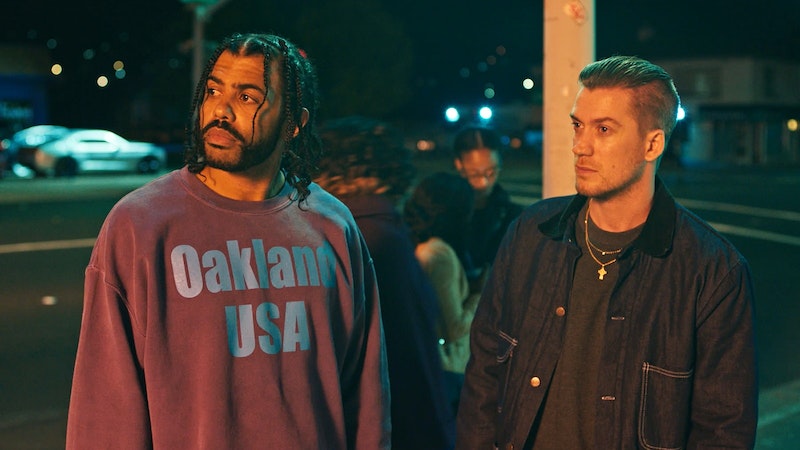 It’s been a season for thought-provoking debut features, set in Oakland, that bring a unique and entertaining spin on race and other hot-button issues. First there was Sorry to Bother You, and now there’s Blindspotting, another film that has some sharp and sometimes incendiary political points to make, but does so in a way that isn’t smug or preachy. Beyond that, it’s often hilarious, while expertly navigating some harsh shifts in tone. And of the 10 best movie scenes of the year so far, Blindspotting has about three of them.

Directed by 29-year-old music video director Carlos López Estrada, Blindspotting was written by Daveed Diggs and Rafael Casal, lifelong friends who are also the movie’s two stars. Diggs has had some TV credits but is mostly known as a rapper and stage actor—he played Thomas Jefferson in the original Broadway company of Hamilton—while this is Casal’s first movie. They’re both outstanding, doing work that’s simultaneously funny and heartbreaking.

But the true star of the film is the city of Oakland itself, filmed gorgeously, amidst a project that lays bare the city’s virtues, and vices, and much the same way The Wire did for Baltimore, or Atlanta does for Atlanta. The hometown love, and the filmmakers’ commitment to telling a very different type of story about Oakland, is apparent in every frame.

As for the story it’s telling, Blindspotting steps into a long list of minefields, from racism to gentrification to gun policy to the difficulties faced by re-entering convicted felons. And its views on all are nuanced, complex, and illuminating.

Diggs stars as Collin, an ex-con who at the movie’s start is three days away from the end of probation. Living in a halfway house, with a curfew and an explicit prohibition against touching a gun, Collin works for a moving company along with his best friend Miles (Casal), a tattooed hothead who’s a loyal friend but also a troublemaker. He’s got an ex-girlfriend (Janina Gavankar), who doesn’t quite trust him.

There’s also a police-killing subplot, and some material about guns that’s very timely. Not only is Chekhov’s Gun here an actual gun, but there’s also suspense about whether a character will get caught carrying that gun before he’s legally allowed to do so.

Diggs is very good here, playing a character with a plight—as an ex-offender trying to avoid both probation violations and other forms of trouble—not often faced by the protagonist of feature films. It’s also probably the first performance of his in which I stopped hearing his voice from Hamilton every time he spoke.

But Casal just about walks away with the film, as a wonderful character. He’s a white guy who’s lived in Oakland all his life, a born hustler who’s such a natural salesman that he could probably put his skills to use and get rich, if not for his obvious violent streak. His best friend is black, as are his wife (the fantastic Jasmine Cephas Jones, also from Hamilton) and his son, and Miles sees himself as authentic and real, unlike those loathsome yuppies who arrived in town five minutes ago.

The film invites the audience to laugh at the smug, inauthentic gentrifiers. One of them is played by Wayne Knight (Seinfeld’s Newman), as a sniffing-his-own-farts art collector. And there are running gags involving a $10 bottle of green juice and a burger joint that re-opened with veggie burgers. But the film also acknowledges, with a powerful late scene, that violent rage at the gentrifiers isn’t exactly the answer either.

The opening scene, set in an Uber, is good. Another, in a hair salon, is even better. A late confrontation between the best friends lays out the film’s subtext, but in such a way that feels necessary rather than overkill. But one scene, a flashback in which a co-worker (Brockmire’s Utkarsh Ambudkar) recounts the story of what exactly Collin did to get sent to prison—is otherworldly, a perfect combination of hilarity and sadness. It’s the rare scene that made me sorry I was watching it in a theater, because it meant I couldn’t rewind and watch it again.

There’s one other scene in the movie, near the end, that’s going to be talked about, and I’m guessing it’ll be somewhat divisive. I didn’t think it quite landed, but your mileage may vary. Its combination of a gun, a cop, and rap music make it every Fox News viewer’s worst nightmare.