The stasis of Manchester by the Sea is its most remarkable feature. 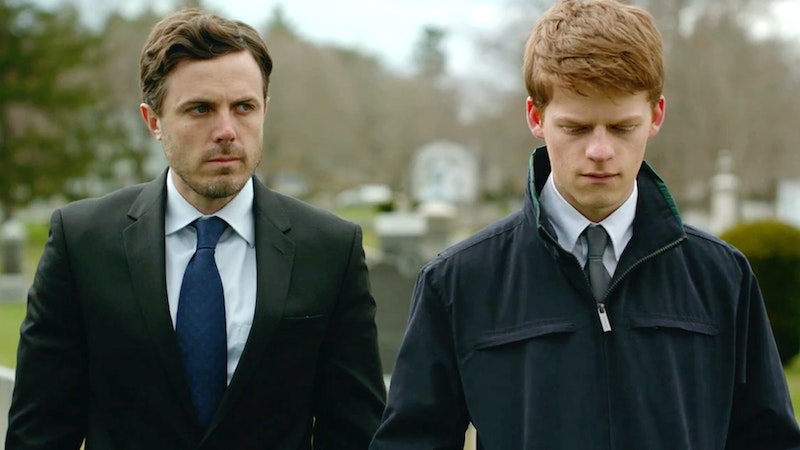 How does a broken man recover from tragedy? This is the set-up for so many movies: they run like water through your fingers every year. Coming of age stories, the hooker with the heart of gold, the kid or woman or animal or object that comes into the broken man’s life and makes it all better, or at least bearable. They show him that the world is not a dark and scary place, that life is what you make it, and why don’t you go and seize the day with us? Cue the epiphanycore tunes, the sun comes out, the clouds part, and the grief process sheds a better, more grizzled, more compassionate man. I was sure that’s what Manchester by the Sea would turn out to be: the trailer undersold the sadness of this film, and the stasis that we’re left with after more than two hours of prosaic but necessary activities and daily routines amongst the wreckage of sudden death in the family.

Casey Affleck plays Lee Chandler, a janitor living in a hole of an apartment in Boston with no future and a torturous past. His older brother (Kyle Chandler) dies suddenly—congestive heart disease finally gets him at a young age. It’s a shock, but not entirely unexpected, and Lee goes through those grim motions with a numb familiarity, and when he lingers in the morgue touching, kissing, and looking over his dead brother’s body, the audience still doesn’t know what wrecked his life and head so much that he ended up in a hole in Quincy. A tragic mistake with immense consequences, an accident that kills three people and spiritually drains dozens of people around it. Lee is offered the opportunity to be his teenage nephew’s guardian after the heart attack, and of course this is all a shock because the elder Chandler never asked Lee’s permission, “because he knew what I would say.” The horror of Lee’s life is another coming of age or coming around clichés, along with the chance to be a parent figure. But writer/director Kenneth Lonergan isn’t interested in the candy panacea of these other garbage paint by numbers redemption stories.

What’s most remarkable about Manchester by the Sea is that its main character ends up right where he started: broken, miserable, full of anger and resentment and a penchant for self-punishment that will probably never go away. The stasis of the movie doesn’t hit until it’s over, and you realize the change you were sure was coming based on conditioning never happened. Things either get better or worse, they rarely stay the same, especially in a film full of familial death and strife. New England is a main character in the movie, a grim, gray place full of decay and ramshackle architecture of the dead. As in real life, epiphany does not come, and the movie hums hours after viewing, and you find yourself picking up the pieces as if looming over a disaster scene. Life goes on even as it presents the worst possible scenario, and people just take it, stuck, unable to do anything else but continue in a state of spiritual purgatory.