Gender as performance in Breillat's Sex Is Comedy. 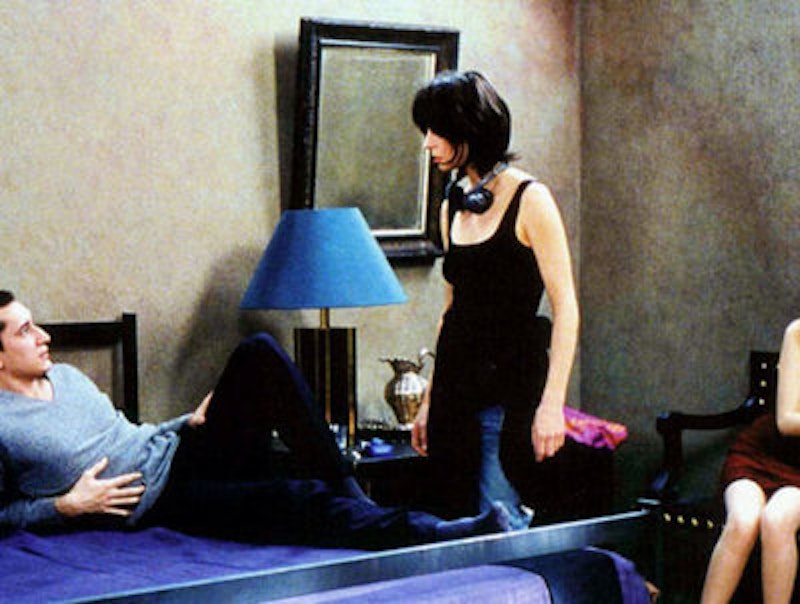 This is the sixth post in a series on women filmmakers. The fifth, about Bend It Like Beckham, is here.

"You look at boys the way men look at girls; for consumption, not human qualities," one of the crewmembers tells director Jeanne (Anne Parillaud) in Catherine Breillat's Sex Is Comedy (2002). To be a director is to consume images and bodies; it's to see individuals as instruments for your own vision, rather than as people in their own right. Film is a male gaze—and so, when a woman sits in a director’s chair, her gaze, and her mind, becomes male too.

The 90-minute film is a semi-autobiographical account of Breillat's experiences filming the sex scene for her controversial coming of age story Fat Girl (2001). Like Breillat, Jeanne, is a woman. But filling the usual male role of film director, she takes on a host of male qualities. "The violence, the power trip" of filmmaking "is masculine," she says, and she revels in dictatorial, arbitrary power—in an opening scene filmed on the beach, she at first gives instructions to the extras, then, when they don't look like they're having a good enough time stripped to their bathing suits in freezing weather, she shouts at them for doing it wrong and tells them all to leave. She cudgels and bullies her Actor (Grégoire Colin) and Actress (Roxane Mesquida) into kissing and caressing and miming sex, just as the Actor, in the film narrative, negotiates and pushes and cajoles the Actress.

Jeanne also treats the Actor as a sexual object. She criticizes his looks, and reacts with jealous bile when he mugs and flirts with the filming crew. Director and actor have long, intense conversations in which they seem about to kiss—and in which the Actor talks about how the experience of being in the film has left him alienated from his own body. He has a dream, he says, in which "I had a cock that reached to the sky; I had become tiny." In the film on film, the actor actually wears a plastic penis; his "cock" is no longer his own, but is instead a detachable bit owned and manipulated by Jeanne. Objectification is a bitch.

Jeanne seems at times to enjoy the role reversal. "You revel in this kind of scene; you trapped them," one of the crew tells her. When she blocks the sex scene with her assistant Leo (Ashley Wanninger), she usually takes the role of the man, on top, flirting and demanding. She also says she hates mothering her actors. She likes being in control. In the final scene, post-sex-scene, post-climax, in the middle of the credits, she chews a banana with insouciant enjoyment of the castration imagery as the Actor looks on with something like horror. "I think life is hilarious," she says, with great self-satisfaction. She has the penis; she has the power.

But while the film is a celebration of male control in some ways, it also presents Jeanne's directorial style, and approach, as distinctly female. In the scenes with the Actor, she’s as seductive as controlling; like she's using her feminine wiles to get him to perform, professionally and sexually. And her relationship with the Actress, which at first is distant or antagonistic, switches in the final scene, shot in the nude, to intimacy and comfort. She first holds the actress and encourages her to scream repeatedly. Then, after the tearful scene, in which the man mimes anal sex, the actress continues to weep, as Jeanne goes to comfort and praise her. Directing here isn't about the law of the father, demanding absolute compliance. It's about aid, love—mothering.

Being a director doesn't necessarily mean that Jeanne is masculine. Rather, she identifies, and experiments, with gender and gender expression. As writer and director, she imagines, and inhabits, both the Actor and the actress; she’s the boy with the fake penis and the girl who wants sex without admitting to desire. "She wants that as long as he's responsible for it. “That's young girls for you," Jeanne says with assurance—even as the film is a displacement of her own desires, a way to put what she wants on screen and make it okay because it's fiction.

"You be the girl, I'll be the boy," Jeanne says to her assistant, and then the two roll around on the bed joking about his erection or lack thereof. Jeanne runs her hand over his nipples, and it sure seems like the two of them have a real sexual relationship. But then the camera pulls back, and you see the prop, film-within-a-film cameras surrounding the bed. "Do you all think I'm sleeping with my assistant?" Jeanne jokes. It was all acting, and meta-acting. Gender is a performance.

The shibboleth, "Gender is performance" is sometimes interpreted as meaning that there’s no gender; camp or drag is seen as a way of undermining or ridiculing the idea of gender. Sex Is Comedy can be read in those terms. The act of sex is funny because sex, or gender, is a joke, a pretense. The Actor wandering around the set waggling his fake penis is highlighting the artificiality of maleness. Gender is a symbol, not a fact, and when you see that, you giggle (unless you're the Actress; she's singularly unamused by the Actor's shenanigans).

But "sex is comedy" doesn't have to mean, "gender is a joke." It could also mean, "gender is exhilarating, entertaining, fun." Creating her film makes Jeanne miserable, sometimes, but it's also empowering, not just because she gets to play male roles, but also because she gets to play every role. She gets to be powerful, dictatorial, demanding, petulant, jealous, sexy, stern, sensitive, mothering, indecent, lecherous, confused, triumphant. Men who are artists are seen as powerful and sensitive, swaggering and vulnerable, hard and soft. Women are rarely granted such a range of possibilities. They aren't allowed the narcissism of being everyone. Breillat's celebration of her own artistry isn't about presenting herself as masculine, feminine, or beyond gender. It's about being an artist who can try on different genders, and seen, not as a freak, but a genius who gets to hold the banana at the end.