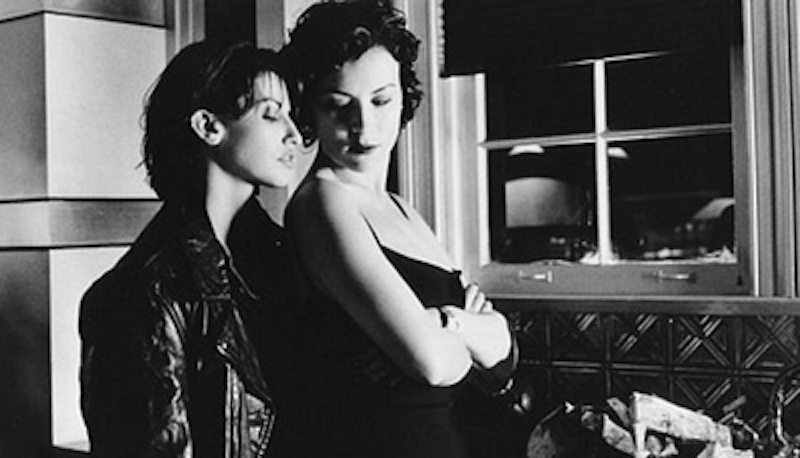 Noir is a genre obsessed with gender and gender reversal. The figure of the femme fatale is a symbolic bolus of misogyny and empowerment; of terror at, and lust after femininity; of fascination with masculine women. In The Last Seduction (1994), a late, self-aware entry in the genre, Linda Fiorentino is both the arch-villain as seductress and the daring protagonist, castrating the gullible male douchebag hero and (more or less literally at various points) seizing the phallus for herself. The image of the empowered woman sparks panic, lust, and queer, confused identification and disavowal.  If Sharon Stone in Basic Instinct is thrusting that phallic ice pick, then what gender is she? And if you desire her, or fear her, or both, then what gender are you?

In their 1996 film Bound, the Wachowski sisters gleefully make the queer subtext of noir into more-than-text. It's not an accident that the opening shot of the film shows one of the protagonists, Corky (Gina Gershon), a butch lesbian, tied up in a closet as the camera pans sensuously over high heels, jewelry, and femme accoutrement.

The owner Violet (Jennifer Tilley) is a closeted lesbian. At one point she asserts that she has a butch woman just like Corky inside her, much as Corky is tied up in her closet. Outside the closet, though Violet is the girlfriend of mobster Caesar (Joe Pantoliano). Caesar found her in a club five years before the start of the film, and she's been his kept woman/girlfriend/live-in sex worker ever since. Corky, for her part, has spent the last five years in prison for robbery. After being released, she gets a job rehabbing the apartment next to Violet and Caesar's.

In the gendered logic of noir, Violet is the femme fatale—ultra-feminine, curvy, blatantly provocative. Much-ballyhooed Susie Bright-approved sex sequence aside, the most pornographic scene in the film is probably when Violet and Corky meet for the first time in the elevator and, despite Caesar's presence, Violet makes her intentions towards Corky clear. Corky, for her part, is the guy caught in Violet's web, her tough guy swagger concealing vulnerability. The guy in noir is always castrated; having a woman play the guy is almost truer to the genre than having a guy in that role.

Not that Corky is castrated. On the contrary, she's more male than virtually any of the guys in the film, mostly by virtue of her working-class bona fides. The mob guys in their suave suits and slicked-back hair have a whiff of femininity about them even when they're beating a colleague to death. Corky, though, has clothes covered with paint. She works with her hands, unstopping drains… and, in a double entendre the film is quite aware of, unstopping drains. Corky's hands are insistently eroticized; there are sensuous close-ups, and even more sensuous off-screen manipulations. She's also hyper-competent; Violet compliments her breathily on her handyman skills, but while buttering her up is a transparent effort to get into Corky's pants, those compliments are still true. Corky's butchness is about efficiency, masculine determination and know-how. It's Corky who makes the plan to steal money from Violet's boyfriend; Corky who has the lock pick skills to make it work. She's the hero.

But in noir it's not the hero who's the hero, but the heroine. The first half of the film is shot mostly from Corky's perspective, but as the plan unravels, the camera spends more and more time with Violet and Caesar. Inevitably, in the gender-flipped world of noir, the competent Corky gets outmaneuvered and beaten up; it's the femme who fires the final shots—and then uses her wiles to throw the moony, lovestruck mob boss off the trail. The cruel quirk of her mouth as he drives away, his heart in his dick, is a quintessential femme fatale moment—not least because it inevitably references the most famous creepy smile in cinema: Norman Bates, or possibly his mother, grinning to him or herself at the conclusion of Psycho. Violet is soft and feminine, and the soft and feminine is dangerous and powerful—and therefore, possibly, like Norman, male. That cruel red smile sliding across Violet's face is a twist of gender as much as a twist of the mouth.

The Wachowski sisters weren't out as trans in 1996. In retrospect, though, it's impossible not to see the gender play in Bound as an exploration of the possibilities of cross-gender identification and imagination. Violet's ultra-slinky surface conceals a bad-boy interior. Corky dresses up in masculine drag. And seeing Corky, as a woman, fill a role usually taken by men makes the men in the film look like role-players too. Caesar's macho refusal to be fucked over, his insistence, despite all the evidence, that Violet loves him—he's playing himself, in every sense. Just before he takes the irrevocable step of shooting one of the mob higher ups, the Wachowski’s go into slow motion, and show his eyes closing, as if he's preparing for a big scene. "After all these years, you don't know me, Violet," he says in his final scene, but the truth is that he seems to barely know himself from the masculine script he's slavishly following. Gender is performance, as they say.

But is that all gender is? In the final lines of the film, Corky asks, "You know what the difference is between you and me, Violet?" Violet responds, "No," and Corky says, "Me neither," before the two don matching sunglasses.

Noir is based on a terror of shifting gender—a fear that men will be weakened and turned into women, or that women will cut off that penis and be men themselves. But those fears don't animate Corky or Violet. One is butch, one is femme, both, in the film, are placed in, or experiment with, stereotypically masculine and feminine roles and power relationships. But the fluidity isn't dangerous, because at the end there's a core sameness that unites them as women, as queer women, and, given the directors, at least implicitly as trans women. Gender isn't just performance. It's something you’re bound to—painfully, perhaps, but also in solidarity.