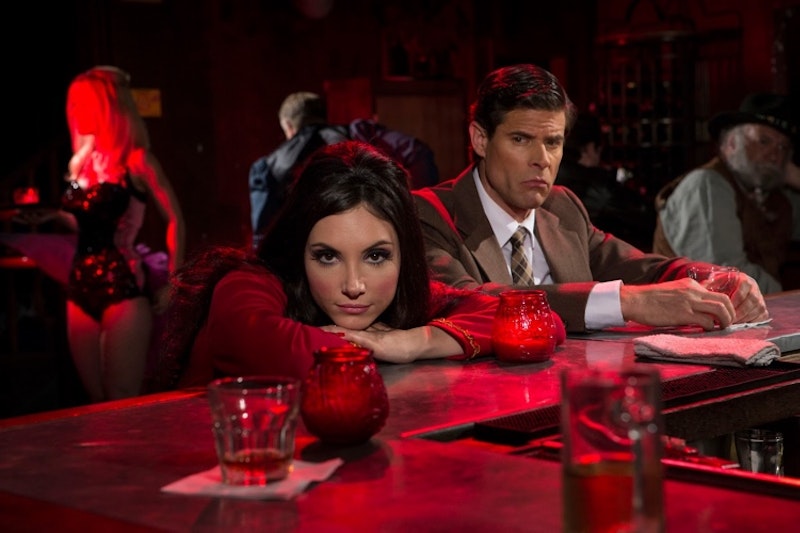 In The Love Witch, Anna Biller inverts the question that Sigmund Freud took to his grave. The father of psychoanalysis left generations of men to shrink at the mystery of feminine desire, but here Biller asks the reverse.

What do men want?

Elaine is a witch who uses magic to figure men out. With the aid of psychedelic potions and autoerotic rituals, Elaine dons a veil of feminine mystification that draws hapless male suitors into her web. But love magic is as poisonous as any other dark art, and Elaine finds that nothing but despair comes from gendered bewitchment.

The script reads like something co-written by Anton LaVey and Jacques Lacan. Psychoanalysis and the occult seem to be in conversation. Satanists deliver manifestos praising hypostatized femininity and a sexed cosmology at the same time Elaine manufactures gender qua manipulative masquerade. Women channel Jungian anima even as the film claims woman does not exist but as a symptom of objectifying male gaze. Masculine subjectivity is reduced to the base buffoonery of whining man-children, but male desire structures Elaine’s own desire. Sexual relations are reified and easily mastered with cheap parlor tricks, yet constantly elude the love witch herself.

On paper it sounds provocative, thought provoking, and bold. But on film it doesn’t quite fill its own order.

Whatever interesting ideas are on display, they suffer from a pervasive and shallow irony that makes the entire project impossible to take seriously. Too often, the film’s stilted dialogue and camp pageantry operate as cover for stunted conceptualization. The film threatens to go there, but it never really does. In that sense, The Love Witch is exploitation film at its most hollow. If Russ Meyer exploited our prurient interest in sex, Biller exploits our helpless mystification by gender. But rather than a coherent vision, we’re given a series of patronizing winks.

Granted, for anyone interested in the intersection of gender and exploitation cinema, there’s plenty to love about Biller’s work here. First, Samantha Robinson’s performance as the eponymous love witch is a sight to behold. She evokes a flickering subjectivity that recedes behind annihilating makeup only to emerge again from beyond the shimmering hair extensions. Elaine’s character projects a continuous aura, an even-handed praxis of fascination, which manages to radiate in a dull tonal climate that passes from throwback artifice to vapid pretense. But with the exception of Robinson, the characters lack even the slightest gloss of pathos. It’s one thing to leave the male characters flatly rendered; but none of the actors seem like they’re even trying.

Visually, Biller parrots the aesthetic sensibilities of Dario Argento and Jean Rollin. The film’s color palate is a non-stop joy, giving us a series of deeply rendered color schemes that range from deep primaries to pillowy pastels. The mod costumes and set designs are all lovingly designed by Biller herself, and every shot feels carefully arranged. The camera projects its insatiable gaze on oozing pastries and acid prisms, and Biller stages scenes of dark liturgy with warmth and refreshing joy.

But whenever the film crosses over into unbridled enjoyment, finding itself caught up in the libertine play of 1960s sex magic, it steps back to re-establish its cheap ironic distance. And that’s a bummer.

One’s left wondering what Biller could’ve achieved if the film had taken its own ideas more seriously and dialed back the irony. But the movie doesn’t give its own concept enough credit, and its affectionate trade in cliché never devolves into genuine absurdity. With a two-hour runtime, the pastiche goes stale.

Biller falters because of her ostensible refusal to commit in either direction; it’s neither farce nor study. Splitting the difference, The Love Witch never raises itself to the status of cinema. We’re left with a disappointing movie that’s lovingly constructed, intelligently researched, and executed with passion, and yet it’s neither funny nor interesting.