Amazon buys MGM for $9 billion, A24 sells “Aspect Ratio Blankets,” and Pierce Brosnan needs to come back as 007. 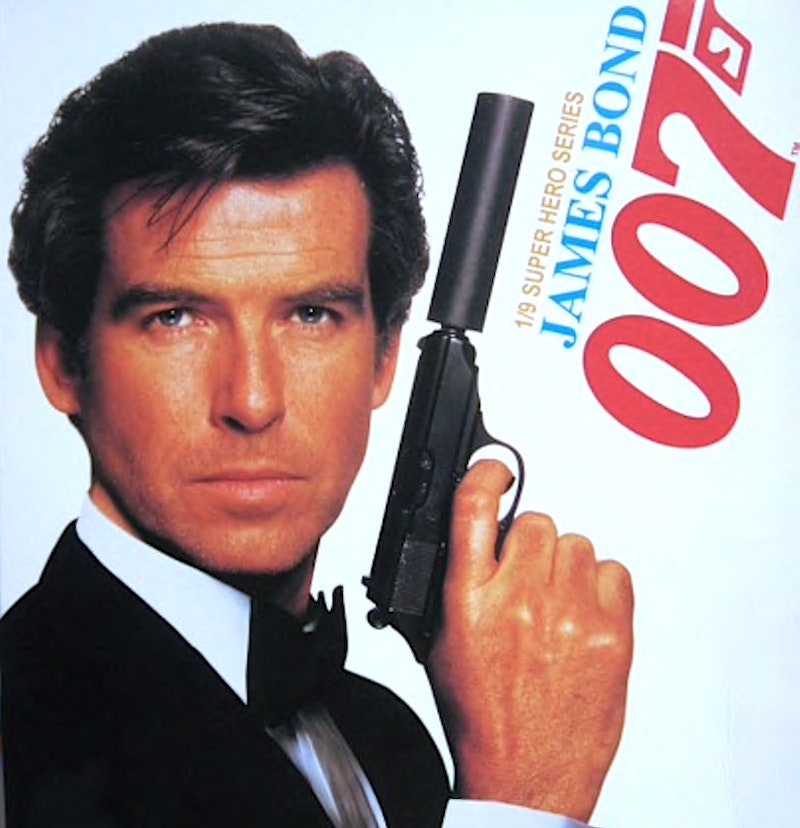 In early-2020, the novel coronavirus decided that No Time to Die was no time at all—it was busy that spring (or, as Jean-Luc Godard said, “Most people call it la covid, I call it le covid. I think he’s a little of both, and a little crazy”). The new James Bond movie has had to wait on a shelf (on a hard drive in cold storage, presumably) since then, and now its third release date, October 2021, is in jeopardy after it was reported Monday that Amazon was close to buying MGM for $9 billion. Daniel Craig, who regularly makes his lack of enthusiasm for Bond known, has been in waiting, once again, undoubtedly dreading promotional events that demand he maintain a level of “on” that he’s apparently gotten tired of.

What about Pierce Brosnan? Call him again. Make a Bond movie in the vein of The Shootist, where John Wayne plays a gunslinger with terminal cancer. Brosnan still looks good, but it’d be silly to have him jump over buildings and roll over sand dunes in a Jeep. Remember that he was “shocked” when he was told in the mid-2000s that he’d been passed over for Casino Royale, Craig’s star-making role: this is a man that hasn’t been seen since, except in those Mamma Mia! movies that have their fans and no one else.

But I get the sense that Brosnan has money, is either independently wealthy or through his wife, who he’s been married to for nearly 30 years. No fooling around from the 007 I grew up with, and still consider the best Bond, the perfect Bond, the only Bond—James Bond. He’s the one superhero I still care about, but I’ve never seen any of the Craig Bonds. I’m just not interested. James Bond isn’t blond, but more than that, Daniel Craig doesn’t look like James Bond. Idris Elba was mentioned as a possible successor years ago, he would fit, and if he weren’t such an awful actor, Benedict Cumberbatch would fit, because he has the face of a Bond. Admittedly, it’s his mild resemblance to Brosnan, but nonetheless: I don’t know my British actors. They have the lowest batting average of any country when it comes to cinema.

I’ll see No Time to Die, though, only because I’ll be rushing to see every event and tentpole movie not made by Marvel I can this summer and fall. With theaters like The Senator and The Charles in Baltimore, we’re not deprived—at least of hearing the James Bond theme song. I don’t think I’ll fly to California to buy the $100 Disney sandwich, though—I’m not that eager to get outside and travel.

“The ‘Quantum-sized Pym-ini Sandwich’ is made with salami, ham, provolone and a sun-dried tomato spread on toasted focaccia bread—and it costs $99.99. But a closer look at the menu reveals the serving suggestion is ‘6-8 guests,’ meaning it’s likely much larger than expected.” Right. Right. It’s likely larger than expected. The article goes on to say, “the restaurant also offers a single-serving Pym-ini Sandwich for $14.49, for those not interested in sharing.” For those not interested in sharing. Right. Right.

Remember: we’re all in danger. From the Hollywood Reporter article linked above: “In its first-quarter 2021 earnings report, Amazon mogul Jeff Bezos said that, ‘over 175 million Prime members’ have streamed television shows and movies in the past year, up more than 70 percent year-over-year.” Even taking the pandemic into account, that’s an astonishing figure. I’m not sure if Bezos considers movie theaters “an existential threat” as Netflix’s Reed Hastings does, but he doesn’t appear too keen on them: if he were, he’d buy AMC and turn it into a chain of Amazon theaters, just like the studio distribution system before the late-1940s. It’s better than nothing—right?

Worse still, bigger independents like A24 rely on “merch,” accessories, accoutrement, and expensive bullshit in order to finance their movies (one hopes). My friend Leigh Ann sent me a picture she took of some guy’s sweatshirt in a Los Angeles Whole Foods: it was white, with blue serif font spelling out the phrase “A Twenty-Four.” She wondered if this was a bootleg made by a truly dedicated (and insane) hypebeast. No—in fact this is an actual shirt you can buy from A24’s online store. What kicked me in the head, just like that 70 percent rise on Amazon Prime, was the Aspect Ratio Blanket.

I haven’t written much about aspect ratios, I do care about them, I think they’re as important to a film as a frame is to a painting, and to watch a 1:85 film cropped to 4:3 is unacceptable—I can wait (this goes out to the only DVD in existence of Elaine May’s The Heartbreak Kid). The Aspect Ratio Blanket rubs me the wrong way, mostly because it’s $120. But even if this thing cost five bucks, what does it mean? Why are they selling this? Why would anyone pay that amount of money for a blanket with a bunch of different aspect ratios? That’s not even what it looks like, the blanket looks like a fucked-up space invader, to be generous.

No. No more remakes. No more $100 blankets. There must be a counterpoint to the new studio system.