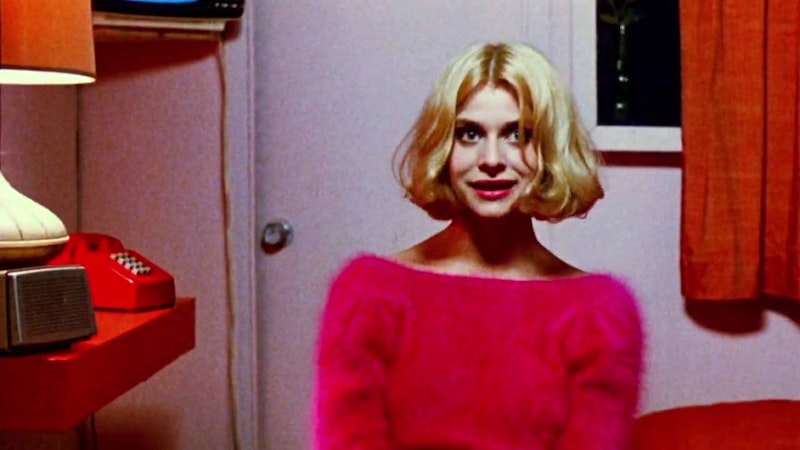 Two years ago, Nicky Smith wrote about the 1984 film, Paris, Texas, as an object of contempt. He criticized the film’s warped sense of morality, describing it as “emotionally manipulative.” Smith’s criticism hinges on the depiction of the father-son relationship, calling Travis (Harry Dean Stanton) a kidnapper and “a deadbeat alcoholic psychopath.” I was initially surprised at Smith’s description of the indie favorite, but finally watching Paris, Texas, I see that not only was he right, but didn’t go far enough.

The film’s irony is that Stanton is a likable and sympathetic presence. With doe eyes set in his weathered features and scarecrow frame, one believes he’s been to hell and back. It’s a quality that can’t be faked, and it serves him well in the opening sequence of the film. The long pan shots of Travis emerging from the desert only to collapse from dehydration are devastating. Robby Müller’s cinematography was so influential that it was copied in other films, TV shows, music videos, and commercials well into the 1990s. That Müller knew how to capture his subjects in all of their devastating beauty, particularly Stanton’s bleak charisma, is the key to the film’s devoted following. If the cinematography matched Travis’ madness, it’d look like a far more sinister noir.

The film’s great failing is how it deals with trauma, particularly the trauma that Travis inflicts on his family. Paris, Texas presents Travis as something of a contemporary Heathcliff, mourning his lost love, willfully oblivious to how he drove her away, with the Southwestern expanse a substitute for the Yorkshire moors. The deceit of gothic romance is that dysfunctional domesticity is an expression of love, and nowhere is this clearer than in the film’s exposition, where Travis finally finds Jane (Nastassja Kinski) working in a Houston peep show.

As Smith points out, Travis can’t even face his wife in a one-way mirror. In the peep show setting, he turns his chair away to talk into the phone, while Jane’s forced to stare at herself in the mirror. He recounts their relationship, meeting her when she was 18 and he was a much older man. He reminisces about their wonderful early years, and how that disintegrated because of his irrational jealousy and heavy drinking. He stopped drinking when they learned of her pregnancy, but after their son was born, the relationship collapsed into dysfunction. As Jane struggled with postpartum depression, Travis’ jealousy returned and so did his drinking. He was so suspicious of her behavior that he tied a cowbell around her ankle, which she worked around by stuffing it with a sock. After a night of drinking and fighting, Travis passed out. He woke up to discover that his wife and child are gone, and their trailer was on fire. From there, Travis walked out into the desert to wander about for the next four years.

We’re given little information about Jane during that time, but the few clues don’t indicate a happy, healthy life. Presumably, she’s the one who leaves their son, Hunter (Hunter Carson), in the care of Travis’ brother and sister-in-law, Walt (Dean Stockwell) and Anne (Aurore Clément). This is probably the smartest decision that either Jane or Travis ever make because, as Smith observes, “They are good people: responsible, reliable, and genuinely loving toward their nephew. They have raised him well.” While Travis is staying in Los Angeles with them, Anne says that Jane kept in intermittent contact with her, before ceasing altogether. Anne reveals that Jane had been secretly depositing money in an account for Hunter’s care. The amount isn’t consistent—sometimes $100, sometimes $5. To me, this is a small window into the prospect that Jane’s existence is hand-to-mouth. It also tells us that she still has some sense of responsibility toward her son. While Anne is explaining this to Travis, telling him that she traced the deposits back to a Houston bank, I think he interprets this as Jane wanting to be found.

Jane’s response to Travis during the exposition also gives us a few clues about her life, particularly her trauma. Based on what little timeline we’re given, I assume that she’s about 21 when she has Hunter, 25 when she leaves him with Walt and Anne, and 29 by the time we see her in Houston. The postpartum depression that Travis describes is pretty common. As it sounds like Jane went from high school to being the object of Travis’ obsession, her depression included a resentment that he was sucking the youth out of her. Jane handing Hunter over to Walt and Anne reveals that she has enough self-awareness to know she’s not equipped for motherhood. It’s not uncommon for someone fleeing domestic violence to turn to sex work, especially when she doesn’t have any work experience or training. This is also a way trauma compounds, something Jane exposes when she says she always hears Travis’ voice in the peep show speakers.

When Hunter and Jane are reunited, the scene tries to be heartwarming, but it strikes me as unintentionally callous. Travis’ rationale to reunite them is never explained, beyond his blind belief that a child should be with its mother. What Travis fails to consider is that if Jane hasn’t returned to collect her son, or even visit, there are probably legitimate reasons. Kinski doesn’t shy away from expressing Jane’s vulnerabilities, and she doesn’t look like she has it in her to provide a home as stable as the one Hunter had with Walt and Anne. As the film ended, I expected the next scene to involve her returning Hunter to his aunt and uncle to resume their arrangement. This journey is bound to cause some trauma for Hunter too. He’s likely to feel rejected by both his parents and seems smart enough to eventually resent how messed up they are.

Walt and Anne exist as a kind of variable that’s never solved. When the audience meets Walt, he seems a little cold, and lacking in compassion for his possibly ill brother. As the story progresses, I came to understand Walt a little better, that he’s the good brother who always had to clean up after Travis, and there’s not bigger clean-up than raising his child. In one of the last scenes where we see them, Anne expresses her concerns to Walt that their marriage might not survive Travis’ intrusion. It’s no wonder Walt seemed disappointed to learn that Travis was still alive. If Jane were to return Hunter to them, and they all resumed their lives from before, Anne and Walt are still left with the fallout of Travis’ behavior. Anne’s doubts are the only glimmer of sanity from the filmmakers, like they stumbled onto a clue as to what kind of person Travis really is.

I’ve always enjoyed Stockwell and Stanton as character actors, so I was looking forward to seeing them in leading roles, and a John Lurie cameo is always welcome. I was familiar with Stockwell’s more flamboyant performances, so it was impressive to see him play a more reserved personality. I think Stanton’s career after Paris, Texas had him recycling Travis. I can’t help but see his unemployed father in Pretty in Pink as Travis in a different setting—pining for the wife who left him, struggling to connect with his child—but too unmotivated to be a kidnapper.

If the film focused on Walt’s perspective, it would’ve been the meditation on family and love that director Wim Wenders intended. By focusing on Travis, there’s no meditation, only his banal desires. There’s no doubt that Walt loves Anne and Hunter because of the work he puts in to provide for them, the respect he shows for their dignity, and that’s what makes a family.