Caveat Explains Too Many of Its Mysteries

Damian McCarthy’s Caveat is an atmospheric, claustrophobic film, but it leaves nothing unexplained. 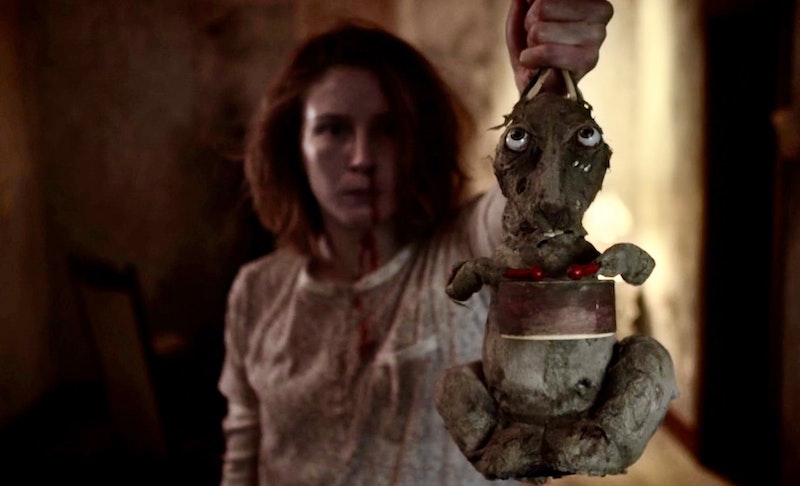 Damian McCarthy’s Caveat is an atmospheric, claustrophobic film about the holes, blank spots, and dead ends in the human mind and heart. It finds horror in the inexplicable—and then, inexplicably, ruins it by explaining everything. It’s like if David Lynch ended Eraserhead by having Jack Nance sit up in bed and declare it was all a dream.

Caveat’s plot is set in motion by a slippery side-burned man named Barret (Ben Caplan) who hires a heavily-bearded, recently hospitalized guy named Isaac (Jonathan French) to babysit his mentally ill niece Olga (Leila Sykes). It seems like a good deal, until Isaac gets to Olga’s remote cabin and discovers it’s on an island (he can’t swim). Barret also tells him at the last minute that he’s expected to wear a harness with a chain to keep him from going into certain parts of the house, especially Olga’s room.

You’d think Isaac would take one look at that harness and say, “Fuck this.” But we’re in a world that’s closer to dreams than sober daylight decision-making. The next three-quarters of an hour of the 87-minute film descend into a mounting anxiety of occultation, as the main character finds out he knows less and less. McCarthy frames painterly shots of Isaac wandering down narrow halls amidst the dilapidated clutter of the small cottage or gazing at a black and white dog chained outside, who gazes back at the human, chained inside. The ambient, pulsing soundtrack is occasionally rent by distant, eerie cries. Those are foxes, Barret has assured Isaac. But the screams also might be coming from the intermittently catatonic Olga. Or from someone else.

Isaac doesn’t know who’s in the house, and he’s not sure who’s in his head. We eventually learn he’s an amnesiac. He doesn’t remember why he’s friends with Barret, or if he’s been at the cabin before. To both Isaac and the viewer plot, setting, and character—even Isaac’s own—are opaque. Filmgoer and film protagonist are harnessed so they can’t investigate, or get away, or breathe. McCarthy keeps framing scenes in which Isaac is looking through dark holes in the walls, trying to shine a flashlight to see the outlines of some horror or threat. He also keeps falling asleep, to be woken by a painting falling, or a mummified rabbit toy with a drum that bangs into action at random, or some sinister supernatural intent.

Everything about the filmmaking, imagery, and paralyzed performances in Caveat signal that this isn’t a mystery that can be solved. Isaac can’t slip his bonds any more than you can slide out of your own skin or skull. He’s among the dead. He can’t see more broadly for the same reason a corpse can’t turn its neck. The caveat isn’t that he has to wear a harness. It’s that he’s chained to an iron ring that is earth, or hell. There’s no key to let him out.

And then, disappointingly, there is. The movie’s last half hour is a shower of gratuitous answers, with flashbacks that vitiate the film’s carefully cultivated claustrophobia and mystery at the same time. Barret’s motivations, Isaac’s guilt or innocence, whether there’s a supernatural presence—suddenly the flashlight shows you everything, past and present, in a misguided panopticon of mundanity. The movie dissolves into tedious plot complications and incongruous campfire-story startle scares. It makes no sense.

The problem’s clear. McCarthy had a lovely art movie going, but didn’t have the courage, or the vision, to pursue it in defiance of the stricter and more marketable plot requirements of the horror genre. It’s a shame he couldn’t, or wouldn’t, follow through, given his filmmaking talent.