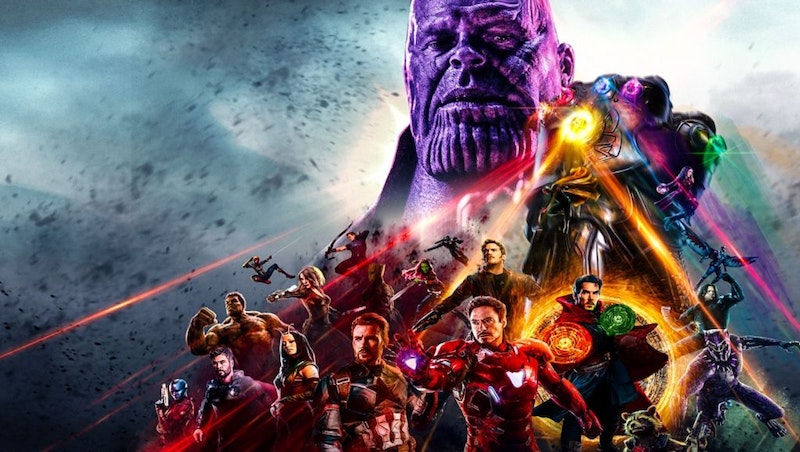 Just over two months after the Marvel Cinematic Universe’s greatest triumph in years, Black Panther, comes Avengers: Infinity War, a film that’s a tremendous step the other way. Too many characters, too much plot, too much everything. Avengers: Infinity War ends on a creative and genuinely surprising note from everything that’s come before in the MCU series. It’s a shame that getting there is such a boring, indeterminable slog.

The film, representing a culmination of 10 years of storytelling, has our heroic Avengers teaming up with the Guardians of the Galaxy in doing battle with giant purple alien villain Thanos (played in a semi-recognizable motion-capture performance by Josh Brolin, in the actor’s best villain murderous turn since Milk.) This one’s directed by the Russo brothers, known previously for some of the better entries in the series, including the second and third Captain America pictures.

Thanos has been looking all over the galaxy for “Infinity Stones”; if he collects all six, it allows Thanos to carry out his plan of wiping out half the population in the universe (think of Thanos as a terroristic alien version of the Zero Population Growth movement from the 1970s.)

The general arc of the plot, for the first two hours of its 160-minute running time, repeats itself over and over: Thanos tries to get one of the stones, the good guys fight him on it, and he overpowers them, in bold and often tragic ways.

The MCU has always treaded a fine line when it comes to making their films appeal to both diehard fans and more casual ones. Most previous films in the series haven’t required a working knowledge of 40 years of Marvel comic book canon in order to follow the plot. I’ve spent almost no time reading comic books, but the majority of MCU films over the years have usually appealed to me at least in some way, even if I have had to ask comic book obsessives to fill me in on the specifics of whatever mysterious baddie showed up in the latest post credit sequence.

But Infinity War is the first film in the MCU series in which I had trouble following along and staying interested. Throughout those two hours, the action moves from one planet to another to another, none of which look especially unique. While the new film finds some unique character combinations, it has way more characters than it has the time or inclination to service. I get the ambition of wanting to stick pretty much everyone in the universe into one movie, but there’s just not room in this movie for all of these people.

There’s one other big objective here, which requires me to head straight into spoiler territory.

At the end of this film, several characters die. This is treated with major gravity, and I gather it’s led to intense reactions at a lot of showings of the film. But there’s something else, based on what I know of Marvel’s release date calendar: At least some of these characters are not going to stay dead.

This has been an unfortunate tendency in geek-appealing fiction in the last several years, and in various Disney movies before that: For a film or series to kill off a major character, to wring all the gravity, pathos and tears out of that death and then, not long after, to bring that character back to life. (Tasha Robinson dubbed this “The Disney Death.”)

It was annoying when Game of Thrones did it with Jon Snow, and more than irritating when the DCEU did it with Superman. Maybe the worst case was Star Trek: Into Darkness, which decided to reenact the ending of The Wrath of Khan, only to reverse Kirk’s death minutes later.

But this one just feels cheap, especially since we know the deaths are almost certainly not permanent. I’ll give Infinity War credit for taking some ideas present in the late, lamented TV series The Leftovers, and bringing them at last to the kind of mass audience that The Leftovers itself never enjoyed—while even bringing on that show’s leading lady, Carrie Coon, for a small voiceover role.

Infinity War is currently breaking box office records, so clearly I’m in the minority here. But I’m also really looking forward to another film from Marvel like Black Panther, a new story about a new, amazing world, instead of one about 75 characters and innumerable different worlds.