I Saw Black Panther With a White Audience 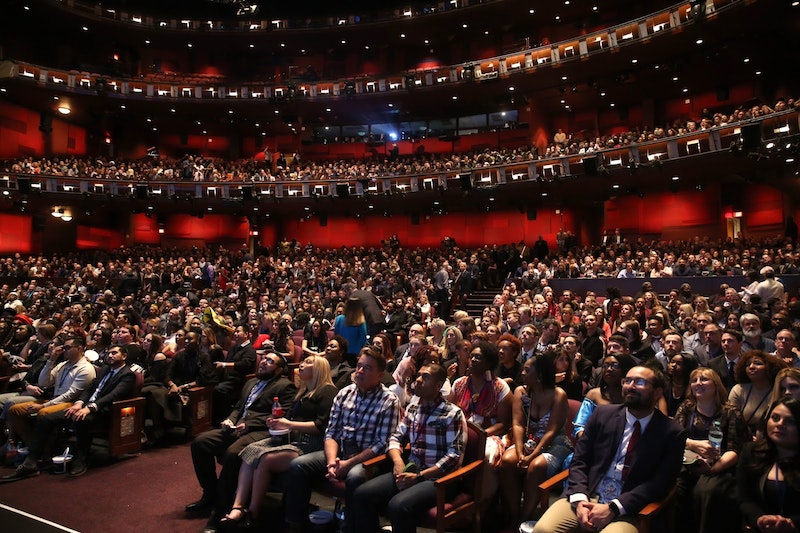 The repeat viewers have been worn out, and instead you get people catching the film before it goes, and in Black Panther’s case these people tend to be white. This dynamic explains how I came to be there, and when the lights came up I saw more whites parked about me, banks of us rising to the projector. Not only whites, of course. To my right sat a 60-ish woman and 25-ish girl from East Asia; to my left sat a young man and woman also from East Asia. Two young black women sat in the row behind us. On line I’d been behind a black woman, the woman’s little boy, and the woman’s friend, another black woman. There’d also been a young couple, both of them long-faced and elegant, standing at the back of the lobby and looking sadly at the tangle of ticket buyers. The couple was black. Coming in the door I saw them and figured Panther might still be drawing a crowd. But I never saw them again. Maybe they were there for Red Sparrow or I Feel Pretty.

But if Panther’s crowd was largely my color, it was still a crowd. Late arrivals had to crane their necks as they scanned the place for seats. And everyone liked the movie, or well enough. The laughs came in the right places, though they were smaller than they might’ve been. The crowd didn’t applaud or cheer, but they didn’t cough or rustle; they maintained the silence that comes when people are paying heavy attention. After the lights came on, about half the people stayed for the Marvel sneak promos. Bucky Barnes turned up in an African hut, and then they got to their feet and filed for the exit, where they formed clumps waiting to sift through the door.

All through the film I’d pretty much assumed the audience was majority non-white. By now I’d learned the truth. Perhaps I felt sour; certainly my orientation blanche had been man-handled by the movie’s polite but firm Afrocentrism. Looking at this cluttered assortment of my own kind, I thought a producer might’ve ordered them up as stereotypical whites. It’s like they’d been practicing.

"Real white” and “very white” are phrases that we, as white folk, use apologetically; they suggest a certain lack of everything. Style, élan, humor, sex appeal, snap: the things that make a person super fun to be around, or just any fun at all. I don’t say this judgment is right, only that it starts looking right once a bunch of us have gathered in one place. Of course, the same may apply to various non-white peoples. Possibly whites suffer from a standard set of human deficits and our lack gets harped on because doing so suits a collective pretense, a tacit understanding that strikes people as fair if not strictly accurate. In the old days this consensus was tilted against non-whites, in some cases savagely. Now it’s been reconfigured. One new feature is a funny little dip that disfavors whites in a particular way: up close and personal, we’re considered kind of blah.

Whites have the institutions, so everyone feels better if we pretend that whites don’t come across all that much in the flesh. The bargain being made here is easy to see. On the other hand, those white people filing out did look awful schlumpy. Put it this way: people in general may be good at looking like discarded plastic bags, but white people are really good at it; or so you’d think at that moment. Such is the way of stereotypes. They corral facts as suits them, and new myths are needed to get the facts re-corraled. Black Panther counteracts white America’s dim impression of black efficacy and self-reliance. It’s a screen of wall-to-wall black people doing the important things that normally whites do on the screen, and it’s a landmark. Of course, whites already have our myth, our answer to the slurs against us. Waiting on the shelf there’s a powerful movie-dream that we must rediscover. The day will come when our hold on institutions has lessened and the consensus takes a new shape. When Kamala Harris is seeking a second term, white children will be given the day off to see the 3-D, digitally enhanced Singin' in the Rain.

Or so I reflected as the damn exit finally became clear. Picking myself up, I made my schlumpy way out of the theater and awaited history. In the meantime, Black Panther is worth checking out. Good movie.