Rotten Apples in The Breakfast Club

Reassessing John Hughes' iconic 1985 film in the context of the #MeToo era and a recent essay by Molly Ringwald. 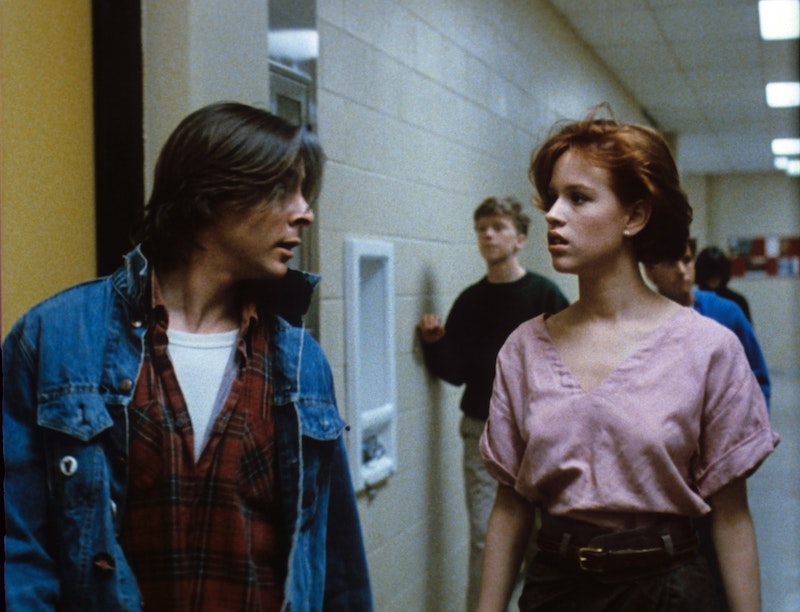 In a recent essay for The New Yorker, actress Molly Ringwald explored what it was like to watch her 1985 film, The Breakfast Club, with her daughter in the wake of the #MeToo movement. As both mother and actor, Ringwald approaches the subject with a strong sense of responsibility, even if she feels conflicted about the larger body of work John Hughes left behind.

Within the realm of cultural criticism, there’s a tendency to approach the work as if it’s all a reflection of the artist's ideology. There's no reason to believe Hughes' ideology with The Breakfast Club ran any deeper than wanting to give voice to teenagers. Culled from a 1986 interview, Ringwald quotes Hughes as saying, “My generation had to be taken seriously because we were stopping things and burning things. We were able to initiate change, because we had such vast numbers. We were part of the Baby Boom, and when we moved, everything moved with us. But now, there are fewer teens, and they aren’t taken as seriously as we were. You make a teenage movie, and critics say, ‘How dare you?’ There’s just a general lack of respect for young people now.”

With The Breakfast Club, Hughes applied a Cassavetes-style realism to the adolescent experience. According to Ringwald, the script didn't begin life in that way, and still had some of the trappings of the teen sexploitation trend that preceded it. To Hughes' credit, he was open to feedback from his young cast, and allowed the film to evolve into something evocative of the teenage psyche. At one point Ringwald wonders how Hughes could so sensitively write about teenage girls, yet have such glaring blind spots.

To me, the answer is simple: Hughes was never a teenage girl, and for all of his imagination and empathy, some blind spots were inevitable. That his most compelling characters were girls is remarkable, especially when one considers that many of their male counterparts were often needy wimps and narcissistic creeps. Hughes put high school status struggles under the microscope, and not even the adults were above examination.

When I was younger, the biggest concern about The Breakfast Club from parents was over the pot-smoking scene. Now the worry, voiced by Ringwald, is over her character being harassed and groped by Judd Nelson's, who’s rewarded for his efforts by winning her heart. The question is whether this normalizes or endorses bad behavior.

The Breakfast Club's simple plot was about five students from different social groups ("a brain, an athlete, a basket case, a princess, and a criminal") who are thrown together for a day-long Saturday detention. Over the course of their day, they put aside their superficial differences and bond over the ways they’re alike, particularly in their disgust with their parents and fears for the future. Despite its shortcomings it remains a compelling, character-driven piece that holds up because the characters are so thoroughly developed.

At the center of the story, is John Bender (Nelson). Deemed a criminal, he both resists and revels in his reputation. Principal Vernon and Claire (Ringwald) exist as objects of his resentment. An argument can be made that the principal has earned Bender's resentment. This is made clear when, fed up with his behavior, Vernon locks Bender in a closet for the duration of detention. The two of them alone, Vernon has the opportunity try to connect with his student. Instead, he belittles Bender and threatens him, inviting a punch that never comes. Perhaps Vernon is hoping that if Bender hits him, he can have the kid arrested and finally be rid of him. But Vernon still leaves satisfied, believing he exposed a coward.

Bender's bullying and outright harassment of Claire seem like an attempt to hold her accountable for being who she is: affluent, attractive, and popular—a princess. While some of that is beyond her control, Claire has a people-pleaser personality. One conclusion is that Bender's issue with Claire is that she has never worked to please him. Bender also works to undermine sympathy the other characters might have for Claire.

The only other girl is Allison, the basket case. She remains silent for the first 33 minutes of the film, but her eccentricities belie her quiet courage. Dressed in dark colors and hair in her face, she appears to put up a wall to keep others out. Her indifference to status creates a challenge to the others, especially the athlete, Andrew. When the others are smoking pot, she doesn't partake. There's a deleted scene, that Ally Sheedy is said to have improvised, where Allison hides in a booth while the others smoke, and sings Phil Ochs' "My Life" to herself (It was deleted because the studio couldn't secure licensing for the song).
When Andrew is introduced, it's easy to assume that he's there as a counterweight to Bender and a compliment to Claire since their social circles overlap. Emilio Estevez's stone-faced performance hides the rage consuming Andrew, and when he compares himself to a racehorse, there's the sense that he doesn't feel any control over his destiny. When he stands up to Bender, Andrew can seem more motivated by avoiding trouble that might cause him to miss a wrestling match than by concern for Claire. It takes Allison seeing past his veneer to finally get him to open up.

Another element that brings the kids together is the difficulty in navigating the demands of conformity. When the kids reveal why they're in detention, it's the three "mainstream" characters who appear to be buckling under that weight. In particular, Brian is in detention because a gun was found in his locker. Rather than admit to his parents that he didn't do well in shop class, he was planning to shoot himself. In the opening scene with his mother demanding that he find a way to spend the day studying, it's easy to see why Brian is afraid of them. It makes Weird Science feel like a sequel, with Anthony Michael Hall playing another nerdy character, who builds a woman that ends up pulling a her own gun on his parents.

Like Brian, Andrew also feels he has no opportunity to be anyone other than who his father wants him to be. Lamenting the pressure from his coach and father, Andrew wishes his injured knee would fail so they’d forget about him. Andrew's father shares stories from own wild times as a student athlete, which inspires the act of bullying that lands Andrew in detention. The only reference to peer pressure comes from Claire, explaining why she thinks the group won't continue to be friends on Monday morning. She's called a snob for her assessment, but no one can say she's wrong.

It could be said that Bender inflicts his own peer pressure on the group. If he's the odd man out at the day’s beginning, then Claire comes close to the odd girl out at the end. Earlier, Andrew makes an attempt to stand up for her, yet when Bender gropes her, Andrew can't even manage to turn his head. When Claire talks about her separated parents using her against each other, she's dismissed as feeling sorry for herself. The moment where Claire comes clean about her virginity, it's an act of exasperation at being bullied and manipulate. In the end, Claire gives in to her people-pleasing tendencies. She gives herself to Bender. She gives Allison a makeover so she can hook up with Andrew.

Some regard Allison's makeover as selling out, but I don't think that's the case. Over the course of the day, Allison and Andrew change the most. Andrew enters the library dressed in heavy layers and by the time he's down to his tank top, he's at his most exposed, literally and figuratively. He expresses remorse for his bullying and angst over his father. Allison comes out of her shell and acknowledges her loneliness, letting Andrew in.

For all of her misgivings, I hope Ringwald still has some pride in The Breakfast Club. It's rare that a movie can connect so strongly to audiences and transcend its era.