The remake makes up for a rocky start. B- 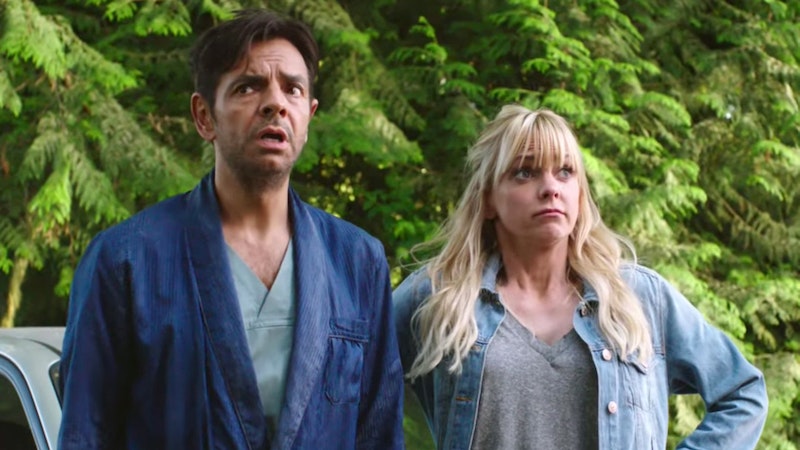 It’s an unnecessary, beat-for-beat, gender-flipped remake of a beloved comedy from 30 years ago, but Overboard is surprisingly effective. The film gets off to a horrible start, but by the end, it won me over, thanks to winning performances by leads Anna Faris and Eugenio Derbez, and a packed supporting cast.

The original 1987 Overboard, directed by Garry Marshall, was one of the better entries of an era when “amnesia comedy” was an existing genre. The film starred Goldie Hawn as a spoiled rich lady who loses her memory and is tricked into assuming a new identity as the wife of a working class man (Kurt Russell.)

The new version, like the first, is set in the fictional small town of Elk Grove, OR, but it flips the genders. It’s the man, Leo (Derbez) who’s the obnoxious, yacht-dwelling playboy, and the woman Kate (Faris) who’s a single mom of three who makes the amnesiac man into her husband.

The other twist is that the majority of the characters speak Spanish. Derbez, while largely unknown to non-Spanish-speaking audiences, is a superstar in that demographic, whose 2014 film Instructions Not Included—another story of a man who becomes an unlikely father figure—made over $100 million at the box office.

Overboard starts badly. There are next to no laughs, as the set-up takes way longer than necessary, and we’re meant to wonder how exactly we’re supposed to root for romance between a truly loathsome rich guy and a woman carrying out an odious long con that she’s brought her children in on. Plus, just like every other movie or TV show in history that involves amnesia, the film is inconsistent about what the rules are of what the amnesiac character can and can’t remember.

But it gets better. The joke is that Derbez’s character, who’s never had to lift a finger in his life, slowly becomes a better man by filling in as a father figure learning to cook, working on a construction crew, and otherwise learning to be a regular guy who watches football (there are near-constant references, for some reason, to the Seattle Seahawks.) It’s all extremely trite, but it works.

Another strength is the supporting cast, led by the burly character actor Mel Rodriguez, whose name you probably don’t know but whose credits are a mile long. Here he gets to let loose in a way he likely hasn’t ever before, and it’s glorious.

Also on board are Eva Longoria—remember her?—fitting perfectly in a best-friend role, and John Hannah (from Four Weddings and a Funeral and Sliding Doors), who cracks some funny Scottish jokes. There’s also an amusing subplot about Leonardo’s relatives jockeying to usurp his position in the family business.)

It’s corny, and about 20 minutes longer than necessary. But Overboard is nevertheless one of the year’s most overachieving comedies.