Why An American Werewolf in London is more comedy than horror. 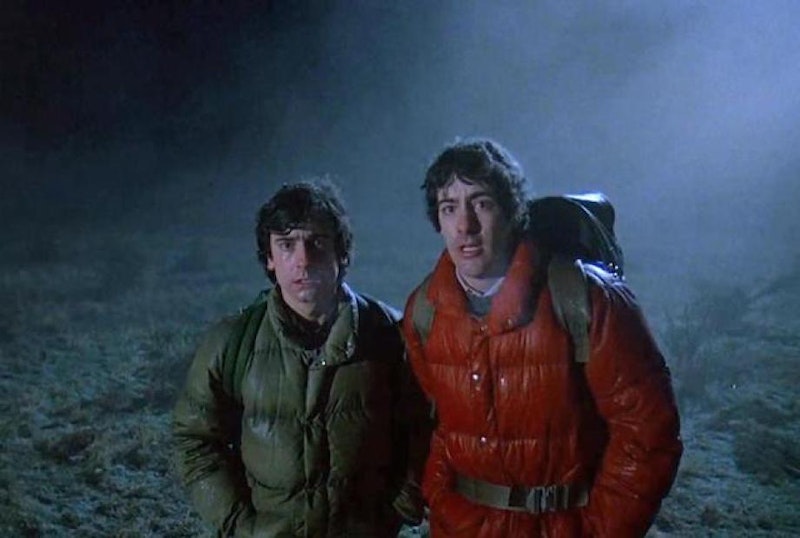 This is part of a series on 1980s comedies. The last entry, on Romancing the Stone, is here.

An American Werewolf In London (1981) is generally remembered as a pioneering example of the horror/comedy genre. But in retrospect the really unusual thing about it isn't the humor elements. It's the amorality.

Horror films aren't usually seen as particularly concerned with moral messages. On the contrary, critics often portray them as debased garbage designed to corrupt the youth. The truth, though, is that most horror films acknowledge, and rely on, an ethical universe. Monster films like those in the Hammer Dracula series present an evil antagonist who must be destroyed by the forces of light. More ambivalent stories still utilize the power of moral disgust. For example, Eli Roth's infamous torture porn Hostel films punish American tourists for being vile, condescending wealthy assholes, and punish East Europeans for being dirty, untrustworthy foreigners. Violence and terror aren't random; instead, everybody gets the satisfyingly gruesome dismemberment they deserve.

An American Werewolf in London looks similar to Hostel in some ways. As in Roth's series, American Werewolf is about American tourists in Europe. David (David Naughton) and Jack (Griffin Dunne) are hiking in the north of England when they’re attacked by a giant wolf. Jack is killed; David is rescued by locals, who send him to London for treatment. He falls in love with his nurse Alex (Jenny Agutter) and all seems well—except he's haunted by the undead ghost of Jack, who warns him that he’ll turn into a murderous wolf unless he commits suicide. Sure enough, at full moon, David turns into a wolf in a much-celebrated special effects sequence. He then goes on a rampage, devouring numerous Londoners. Eventually the police track him down and shoot him—and that's the end of the film.

Director John Landis could easily have made his movie about international resentments; American Werewolf could’ve been a commentary on ugly American cultural imperialism, or on British snobbery. But it isn't. David’s a bit cocky, but he's basically a good guy—he's bitten by the werewolf when he runs to help his wounded friend. The northern Englanders are portrayed as insular, but they're not disgusting or culpable in the manner of the locals in Deliverance or (as a closer analogy) Straw Dogs.

In fact, the central relationship in the film emphasizes, not cultural animosity, but cross-Atlantic amity. The nurses at the hospital marvel at David's good looks (one of them surreptitiously examines his penis), and Alex and David fall into each other's arms with little anxiety or fuss. They’re young and healthy, and their relationship is consensual and satisfying.

Slashers like Halloween often punish women for being sexually active. But this kind of Puritan subtext simply isn't there in the portrayal of Alex, who’s sympathetic, empathetic, and generally a good egg. She’s neither killed nor bitten; sex out of wedlock doesn't lead to her downfall or her humiliation. Her boyfriend dies, but it's not her fault, and she isn't cursed for daring to have a sex life. Life sucks, but it's not her fault.

That's the overall message of American Werewolf, to the extent it has one. Without the usual horror moralism, the violence in the film is essentially random. Evil isn't justified; David didn't do anything to deserve his fate. He just happened to get bitten by a werewolf, just like people happen to get cancer. His life is a horror because life is sometimes a horror. American Werewolf, refreshingly, refuses to align itself with Job's comforters. It portrays David's suffering, but it doesn't condemn him for it.

This refusal to judge is arguably what makes the film a comedy rather than a horror. American Werewolf in London isn't centered on jokes; it's not Beetlejuice. But it does have a lighter tone than horror often does, precisely because it's not vindictive or sadistic. It doesn't take joy in its characters’ deaths, as horror often does. Instead, its moral world is in line with absurdist comedies like The Naked Gun or Monty Python and the Holy Grail. Ridiculous things happen for no particular reason, and then you die. That's comedy for you, or horror, or both.