Pre-millennialist evangelicals once took their end times prophecies to the masses. The Late Great Planet Earth was their chosen apostle. 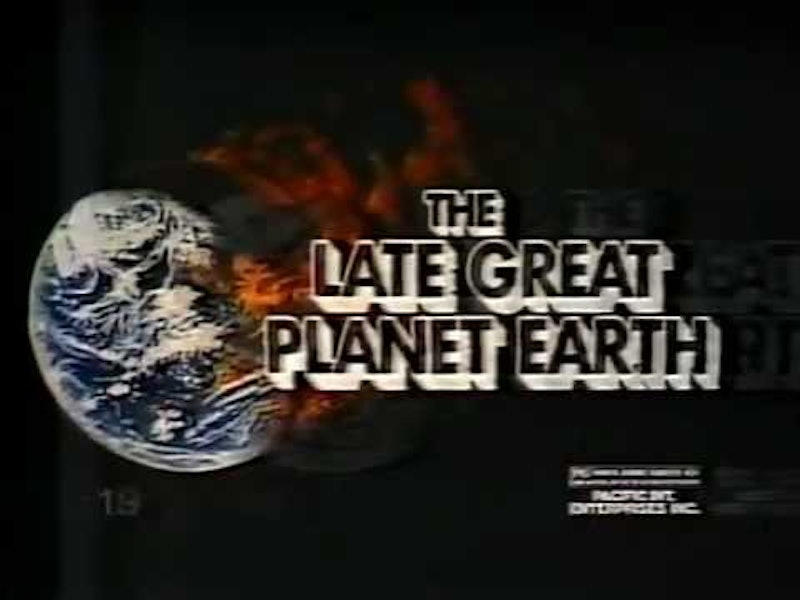 The movie begins with a chase uphill, so naturally it's all downhill from there.

An old man with a long, gray beard scampers across a rocky hillside, steps ahead of a mob armed with stones. It's almost a scene out of Monty Python's Life of Brian, except we're meant to take it seriously.

This is the opening of 1979's The Late Great Planet Earth, directed by Robert Amram and Rolf Forsberg. It's adapted from Hal Lindsey's bestselling book of the same name, published in 1970, which brought apocalyptic pre-millennialist Christianity to the Me Generation and found a surprisingly receptive audience. It's narrated by Orson Welles in the frozen peas phase of his career.

Nearly 40 year later, we're still awaiting Christ's second coming, but The Late Great Planet Earth's second coming is now, released in June on Blu-ray and DVD by Scorpion Releasing, a boutique label that normally gives new life to old drive-in movies and exploitation flicks. But what is The Late Great Planet Earth if not an exploitation flick? It delivers to the devout a catharsis of death and destruction, sinners receive eternal punishment, and the good guys win forever and ever amen.

That old man at the beginning takes a rock to the head, falls off a cliff, and the rest of the mob stones his corpse. This is strong stuff for Pacific International Enterprises, which mostly produced family fare like Mountain Family Robinson, but you have to give Biblical material some leeway.

Welles chimes in to tell us the poor blighter was a prophet. Alas, not a good one, so the ancient Israelites do to him what they were commanded to do with all false prophets. Yet while The Late Great Planet Earth introduces us to many such duds, only this one faces judgment. Some of the others, real people appearing as themselves, even today offer up repeated prophecies of doom, regurgitated by those unaware or uncaring of their dismal track records.

Coming nine years after Lindsey's book, the movie version of The Late Great Planet Earth was late to its own party. The Omen had already turned the Apocalypse into big-budget summer spectacle in 1976, and the steam was running out of the pseudo-historical documentary genre pioneered by Sunn Classic Pictures, which released In Search of Noah's Ark, The Bermuda Triangle, and The Lincoln Conspiracy. But The Omen was the No. 4 movie at the domestic box office in 1976, raking in $60.1 million. The No. 5 movie was, improbably, In Search of Noah's Ark, with a domestic tally of $55.7 million. So, the producers of The Late Great Planet Earth figured there was still money to be made. There was, although not nearly as much: The Late Great Planet Earth grossed $19.5 million domestically against an estimated budget of $11 million.

Even the end times go out of fashion, only for interest to perk up again, probably in a year ending in zero.

The end of the world was especially nigh in the 1970s and early-80s. It wasn't just Jesus' impending return, but nuclear war, pollution, overpopulation, and even killer bees that threatened to end the reign of mankind. Welles double-dipped. Two years after The Late Great Planet Earth, he was the narrator and on-camera host for The Man Who Saw Tomorrow, about the then-trendy seer Nostradamus, who, depending how one interprets him—which is easier with hindsight—predicted World War III (we're past due) and the end of the world (still pending).

Welles brings a baritone authority to both films that neither deserves. For The Late Great Planet Earth, he recorded his voiceover at home and brought the producers a tape, ready to use. Welles evidently wasn't about to argue with these guys over whether to emphasize “in” before “July.” Only after the filmmakers put together a rough cut did Welles shoot his on-camera scenes, and you have to wonder, does he believe a word of what he says, or is he playing magician?

He's not telling, that's for sure. That would be breaking the magician's code. In any case, by the 1970s, Welles would do anything for a quick buck in the hope of completing The Other Side of the Wind or one of the other half-finished, half-started projects in his vault.

Welles spends the first 15 minutes of The Late Great Planet Earth talking about the Old Testament prophets and their supposedly spotless record of prognostication. Then it's a brief stopover in Patmos for another historical recreation, this one starring John the Divine, identified in the credits as John the Apostle, contrary to the scholarly consensus that the two are not the same.

We become privy to John's apocalyptic visions, including a fetching Whore of Babylon (Judith Roberts, lately Joaquin Phoenix's mom in You Were Never Really Here), all a bit reminiscent of the grim doings in Roman Polanski's Macbeth, if Macbeth also included stock footage of charging cavalry, rolling tanks, an a lizard in dinosaur drag.

Only after that does Lindsey, our modern-day John, appear onscreen. Now the hard sell is on.

Richard Donner's The Omen summed up Lindsey's message in verse: “When the Jews return to Zion and a comet fills the sky, and the Holy Roman Empire rises, then you and I must die. From the eternal sea he rises, creating armies on either shore, turning man against his brother, 'til man exists no more.”

The end times John foresaw are finally upon us now that the state of Israel has returned to the global stage. The countdown to Armageddon has begun.

Religions have been counting down to the end of days for as long as there has been religion. The Gospel writers expected Christ's return within their own lifetimes, as Matthew (24:34) makes clear: “Verily I say unto you, This generation shall not pass, till all these things be fulfilled.” That generation did pass, but their successors, both theologians and laymen, have been setting new dates ever since. Jan. 1, 1000, was supposed to be a sure thing.

Most of these prophecies assumed New Testament references to Israel were metaphorical, with Israel acting as stand-in for the Christian church. But with the proclamation of the state of Israel in 1948, Biblical literalism came into vogue.

Lindsey brought Christian dispensationalism out of the churches and to the secularized masses, connecting the dots like Glenn Beck at his whiteboard.

Apart from Israel, the other major geopolitical player in The Late Great Planet Earth is the European Union, or, as it was known back in '79, the European Economic Community, created by the 1957 Treaty of Rome. The EEC in dispensationalist prophecy takes on the role of a revived Roman Empire, from which the Antichrist will emerge and wage the final war against Israel.

This school of biblical interpretation remains strong within the English-speaking evangelical community, and wields significant political power, at least within the Republican Party. More than one Republican pol cozied up to influential fire-and-brimstone mega-church leader John Hagee, only to renounce Hagee once one of his many inflammatory remarks got a signal boost in the press. John McCain's dalliance with and rejection of Hagee was just one of his 2008 campaign's comical missteps, but these things happen when your strongest political conviction is an overwhelming desire to bomb Arabs and Persians.

What set The Late Great Planet Earth apart at the time and makes it influential in evangelical dispensationalist circles to this day, however, wasn't simply its gloss of John the Divine's visions, but its co-mingling of religious with secular doomsaying—with some sleight of hand to obscure their incompatibility.

This is where the other false prophets come in. There's Aurelio Peccei, the first president of the Club of Rome, which had just published The Limits to Growth, the Bible of neo-Malthusian alarmists for the next 30 years. Then there's George Wald, a scientist who won a Nobel for his study of pigments in the retina, thus becoming an expert on everything. But most pessimistic of all, ironically, is Nobel-winning agronomist Norman Borlaug, whose forecasts of starvation and disaster were undone, in part, by his own agricultural innovations.

And where would Chicken Little predictions be without butterfly expert and The Population Bomb author Paul R. Ehrlich? He tells us that within 35 years the Earth will either be crowded with eight billion suffering people or, more likely, experience a catastrophic die-off. He was wrong on both counts, but that hasn't prevented his remaining a go-to source for those promoting current theories of environmental and population catastrophe.

“We are told that our natural resources will be exhausted by the year 2000,” an exhausted Welles tells us before intoning solemnly about the looming threat of Africanized killer bees, probably the 1970’s most iconic eco-terror.

The mix of Biblical exegesis and secular fear-mongering is still a hallmark of prophetic televangelists, but The Late Great Planet Earth was its high water mark with the un-churched and semi-churched. Its lasting influence has been among evangelicals and the Republican politicians beholden to them.

The movie ends with an arty, abstract and ultimately tedious depiction of Armageddon and the coming Kingdom of God on Earth, which will last for 1000 years before God calls time on his creation.

The movie itself clocks in at 91 minutes. It merely seems like an eternity.