Film Review: The Third Murder is a Realist Mystery With a Dissatisfying Solution

Not much concern for bare plot mechanics. C 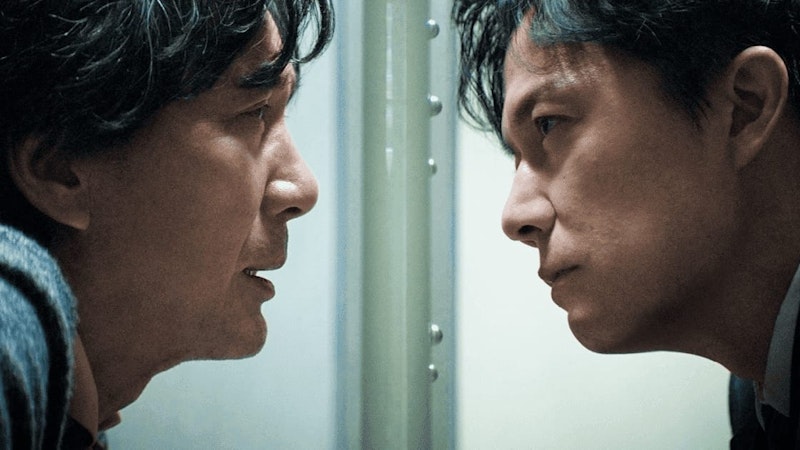 Japanese director Hirokazu Kore-eda is generally known for family drama films made in a semi-realist style. His most recent feature, Shoplifters, won the Palme d’Or at this year’s Cannes Film Festival for working in such a mode. The Third Murder, his previous film that’s just now getting a theatrical release in the States, is a departure. Though it has the same low-key, non-showy form, it’s not a domestic story but a legal mystery. The seeming contradiction between tone and genre is interesting, though it doesn’t carry the movie far.

Tomoaki Shigemori (Masaharu Fukuyama) is a lawyer defending Misumi (Kōji Yakusho), a middle-aged man facing a murder charge. Previously convicted and served time for two other killings, and confessed to this one, Misumi appears doomed to receive the death penalty. However, Shigemori’s investigation into the killing of a factory owner, as well as Misumi’s previous crimes, reveal a deepening mass of complications. As both Misumi and other figures in the case begin changing their stories with each new development, the truth seems to drift further out of Shigemori’s grasp.

As a mystery, The Third Murder isn’t overly concerned with the bare plot mechanics of how each new twist changes the audience’s understanding of the case. Crime fiction aficionados hoping to keep up with an in-depth puzzle will be disappointed, as will any thriller enthusiasts looking for cat-and-mouse action sequences. Deliberately keeping the pacing methodical, Kore-eda instead takes time to examine how each story turn emotionally affects Shigemori, Misumi, and other characters. The plot twists exist less to re-contextualize the crime than to re-contextualize how we see them, and how they understand one another.

It’s an intriguing angle on the legal drama. If nothing else, the naturalistic feel means the movie is refreshingly free of over-the-top courtroom theatrics. But at two hours, the story wears out to the point of slackness, and many of the emotional beats don’t register too strongly. It doesn’t help that repetitive dialogue exchanges spell out not just details of the plot that attentive viewers will grasp on their own, but also most of the film’s themes and many scenes’ emotional register. The cast, particularly Suzu Hirose as the murder victim’s daughter, play well with having to continually unspool new dimensions to their characters, not adjusting their performances but letting us see them differently as time goes on. But they also have to work with functional, obvious line readings.

At The Third Murder’s heart is an interesting question on the nature of guilt, and the friction between the supposed objectivity and fairness of the law and subjective human perception. Rashomon comparisons are inevitable, as at multiple points the movie returns to an early scene of the murder, showing it differently each time to fit new information. Such a technique reminds us of the fallibility and inherent unreliability of the image, and that it’s not always wise to just trust what we see—or think we see. But that idea is muddled beneath a plot that doesn’t usually live up to its intelligence.