The illuminating details of John Callahan’s life are missed. C- 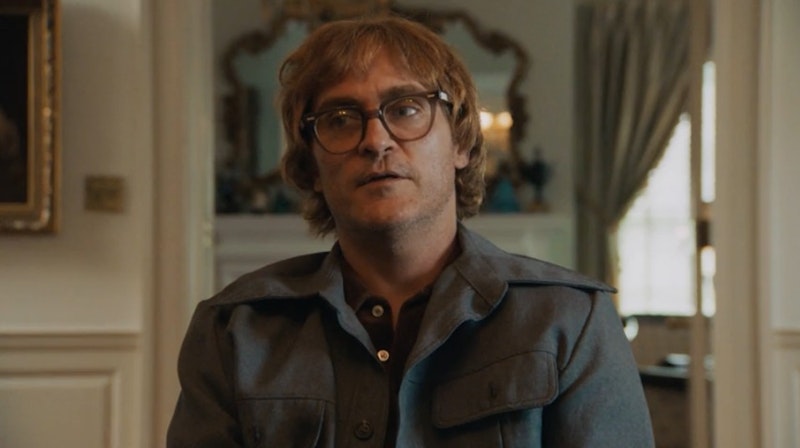 The late cartoonist John Callahan was known for tackling taboo subjects with a morbid sense of humor. A quadriplegic at 21 after a drinking companion crashed the car he was riding in, he delighted in challenging popular perceptions of people with disabilities. (The title of this film is also the caption of one of his cartoons, depicting a cowboy posse coming across an empty wheelchair. One semi-autobiographical collection of his work was named Will the Real John Callahan Please Stand Up?) Don’t Worry, He Won’t Get Far On Foot, a new biopic written and directed by Gus van Sant and starring Joaquin Phoenix as Callahan, follows the major strokes of his life but misses the more illuminating details.

The film is less interested in Callahan’s career as an artist than in his struggle with alcoholism. Frustratingly, it does so through some of the most conventional methods that exist, such as laying out a basic cause-effect-solution path for him which he discovers through the AA 12-step program. Along the way, characters such as Jonah Hill’s serene sponsor Donnie drop eye-rolling clichés like “If you keep saying, ‘Poor me,’ soon it’ll turn into ‘Pour me another drink.’” The causes of Callahan’s alcoholism—feelings of abandonment over being put up for adoption, and then the struggles of paralysis from the chest down—are laid out bluntly, though at least the film doesn’t go so far as to suggest that everything is solved forever once he completes the 12 steps.

The movie is partially nonlinear, sometimes jumping between different stages of Callahan’s life. In one promising early bit, it cuts together Callahan giving the same speech about his problems in several disparate contexts—at an AA meeting, in group therapy, before a paying crowd—suggesting something about how we narrativize our own lives. But “something” is all it suggests, since the idea’s left behind quickly, and abandoned for so long that it becomes jarring when the film cuts from one period to another. The film’s only other formal flourish of note is sometimes illustrating Callahan’s troubles through animated sequences done in his drawing style—such a tired trope of biopics about cartoonists that it should be outlawed by now.

Because it doesn’t do much to explore Callahan’s work in comics beyond their utility as an occasional punchline, it fails to justify why precisely he’s worth following at all. Callahan’s purposefully rough art style and sense of humor were what drew fans to him. Without that, why even make this biopic instead of a fictional movie about a quadriplegic with alcoholism? The answer may be that a biopic about a quadriplegic with alcoholism is a ripe, awards-baity role for an actor of Phoenix’s profile. Why else would the movie devote so much time to his physical anguish and such little comparative time to his artistic process?

There’s always something at least vaguely uncomfortable about watching a non-disabled person passionately pantomime bodily dysfunction and rail about how miserable they are about the condition, and Don’t Worry, He Won’t Get Far On Foot is no exception. The real John Callahan made fun of people who couldn’t look past a wheelchair; this film has trouble with precisely that.