Mad as a Mars Hare as the first Vietnam War film. 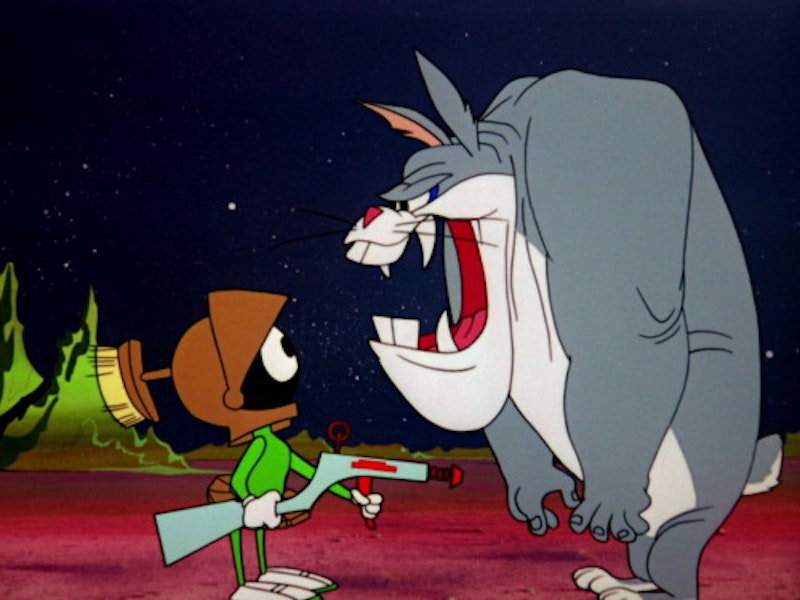 This is part of a series of posts on 1960s comedies. The previous post on One, Two, Three is here.

Bug Bunny is usually an anarchic trickster. He doesn't shore up authority and hierarchy; rather, he convinces authority figures and hierarchs to run off cliffs and into walls. By the 1960s, though, towards the very end of the Warner cartoon classic run, even Bugs was dragooned into the Cold War. Mad as a Mars Hare (1963), one of the last Bugs Bunny cartoons finds Bugs serving as a colonialist catspaw, spreading trickery and chaos in the name of territorial acquisition and the greater glory of the homeland. And if that sounds like a mean thing to do with an anti-establishment Bunny—well, Bugs isn't especially happy about it either.

Bugs' antagonist in Mad as a Mars Hare is Marvin the Martian, a tiny soft-spoken critter with a black face who wears a helmet with a brush on the top of it. In previous shorts, Marvin was clearly in the wrong. In some cartoons he invaded earth looking to steal away some of its inhabitants. In others, he planned to destroy the planet because it obstructed his view of Venus.

In Mad as a Mars Hare, though, Marvin is simply an observer who happens to be in the way of Earth expansion. He’s cheerfully looking through his telescope at the distant earth and musing on the brainlessness of earthlings ("There is a growing tendency to think of man as a rational thinking being, which is absurd.") Suddenly, a rocket from Florida shoots up and knocks poor Marvin on his butt. Inside the rocket is "Astro Rabbit Bugs Bunny," who’s commanded by radio control to "take this planet in the name of earth." Bugs, wearing an ill-fitting space cap, doesn't want to be a colonizer, but his earth handlers lure him outside the rocket with a carrot, where he confronts the understandably peeved Marvin. After some conflict, in which Marvin is repeatedly disintegrated and reintegrated, Bugs wins the day—which presumably means that the Earth has conquered Mars. Imperialism is the happy ending. Marvin declares, "I'm not angry. Just terribly, terribly hurt.”

Mad as a Mars Hare appeared in October 1963, before JFK's assassination and Lyndon Johnson's major expansion of the Vietnam War. Still, Kennedy himself had become more and more embroiled in Southeast Asia, and the space race with Russia was well under way. Director Chuck Jones was aware of the United States' tendency to project power off earth and across the globe, and was having fun in conflating the two.

That conflation hardly begins with Mad as a Mars Hare, though. H.G. Wells' War of the Worlds used space invasion as a metaphor for colonialism. Wells' story specifically compares the Martians invading England to the English invading Tasmania; the narrative is a nightmare vision of what might happen if someone did to us what we’ve done to them.

Jones riffs on this vision of invasion as reversal. Marvin (the invader in previous cartoons) is now invaded. The high-tech futuristic advanced society is under assault by the (supposedly) more primitive people. Marvin expresses contempt for earth culture (he compares earthlings to insects), and mutters eugenic sounding racist sentiments ("no Earth creature is going to contaminate my atmosphere."). Yet it's the racist, condescending colonial invader who’s invaded. Earth and/or America was once a despised backwater, but things have changed. Now the colonized are the colonizers.

The flip-flop of positions means that the aggressor Marvin keeps ending up on the wrong side of the ray gun. When he first accosts Bugs, he points an advanced disintegration weapon at him. But Bugs quickly disarms him, takes the gun, and shoots him with it, disintegrating the disintegrator.

After he has toddled off to his reintegrator, Marvin attacks Bugs with a rifle like "Acme Time-Space Gun" which is supposed to "Project you forward into time where you will be a useful but harmless slave to me." Marvin's reference to slavery is made all the more uncomfortable because he looks like a blackface caricature; when Bugs starts to explain hastily that he has no experience with slavery, there's an implication that the person who perhaps should have that experience is Marvin himself. And sure enough, Marvin has the settings on his gun reversed, and transforms Bugs into a huge, hulking slavering "Neanderthal rabbit," who squashes Marvin into a ball.

The play with time and evolution strolls in out of nowhere in the cartoon. But it's not just a silly stroke of absurdist genius. Colonial fiction often presents the colonized as being in a kind of time bubble; going across the globe is presented as a trip into an earlier, more savage world. Arthur Conan Doyle's 1912 story "The Lost World" is about colonial explorers discovering a South American plateau with Neanderthal people and roaming dinosaurs. Apocalypse Now (1979) shows the people of Vietnam anachronistically attacking Americans with bows and arrows, as if the journey into the jungle is a journey back in time.

Marvin zapping Bugs into a Neolithic Bunny, therefore, is part of the cartoon's colonial shuffle. Marvin, the advanced invader, is himself invaded by those backwards earthlings. If primitive cultures now have the upper hand, Marvin figures he’ll regain the upper paw by turning Bugs into an even more futuristic critter, who will then be his colonized slave. But the ray gun goes awry, turning Bugs into an atavistic nightmare—which in the inverted logic of the cartoon, means that the bunny is now an even more effective colonizer.

The time-displaced Bugs doesn't just reflect H.G. Wells' past vision of futuristic Tasmanians. He also points forward to America's fears of its own designated imperial forces. Bugs is a reluctant warrior, sent off into the future (or is it the past?) to colonize a distant land. When he gets there, he engages in combat—and that combat uncivilizes him.

The uncivilized Bugs is a threat not just to Marvin, but to Earth. "I’ll tell you this much—when I get back to earth, Ole Elmer Fudd and the rest of those hunters are due for a big surprise," the giant monster bunny quips. Bugs back on Earth is a potential Rambo—a man (or rabbit) who has traveled into the heart of darkness and evolved (or devolved) into the caveman Martian invader. Those who bellowed at him and tempted him with fake carrots are going to be in trouble.

This is the last cartoon featuring Marvin, and his departure is ignominious. After scrunched into his helmet, he toddles off, feet scuttling rapidly, while muttering, "Well, back to the old electronic brain." The enemy has been routed—but is that enemy the colonized or the colonizer? Bugs has, in one of his last outings, invaded a future in which he and his country aren't necessarily the good guys.