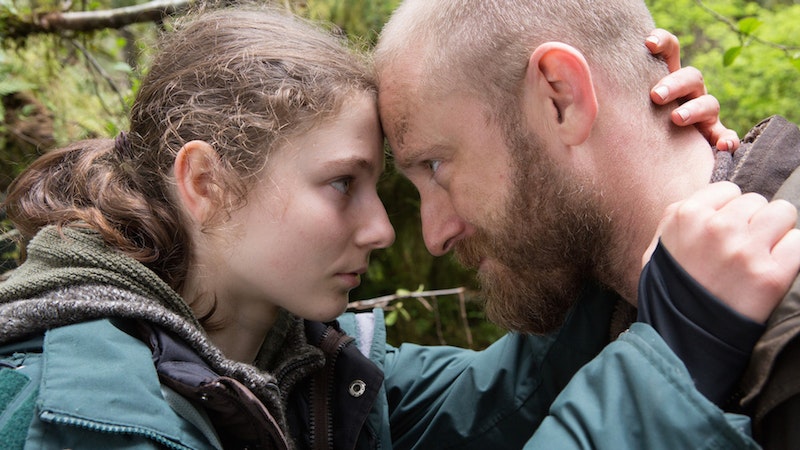 I’ve avoided as many of these as possible, not only because they’re invariably sensationalized, but more so because they’re all the same, predictable ciphers like heavy machinery triggering panic attacks or manic episodes, flashbacks to the war, body parts blown off in soft focus, opioid addiction, the banal struggle of readjusting to boring, unfulfilling life as an American civilian. At their most offensive—Zero Dark Thirty, 13 Hours: The Secret Soldiers of Benghazi, and The 15:17 to Paris—they’re naked propaganda, eliding our own evil of perpetual occupation to cynically milk sympathy for a few noble but broken individuals. The situation in the Middle East is still FUBAR and will remain so for the foreseeable future. Using veterans’ mental and physical debris for easy emotional notes is offensive.

I didn’t have any expectations going into Debra Granik’s Leave No Trace, other than that I hate the woods and any nature activity. I agree with Pusha T: “Totally not an outdoors person, I’m not into it. I’m not into wildlife. I’m not into moose. I’m not into mountain lions. I’m not into foxes, coyotes. I’m not into birds with long wingspans, snakes, hate it all. Hate it all.” So when Leave No Trace opens with a father (Ben Foster) foraging with his teenage daughter (Thomasin McKenzie) on public land that they’re illegally living on, I have no sympathy. This is wrong, it’s child abuse, he needs to be medicated in a safe environment, on and on and on. McKenzie’s character speaks in the same halted, clipped cadence of a kid caught in a lie throughout the entire movie, too tense and always on guard to have a conversation that doesn’t sound like an emergency. Her dad selfishly brings her along on his voyage into the oblivion of nature as he battles memories of the war and chooses to live off the land instead of getting doped up in government housing or a hospital. Do whatever you want man, but leave your kid out of it.

This is what struck me about Leave No Trace: they do have that confrontation where McKenzie tells her father that she “doesn’t have to do this—you do.” By the end of the movie, after they’ve been captured and put in different communities and living situations by the police and escaped half a dozen times, they hit a sweet spot in a commune full of people happy to help each other grow food, keep each other company, and sing songs around the campfire. The daughter obviously wants to stay, but the father must wander.

Granik wisely avoids flashbacks and merely suggests Foster’s service through sound: of helicopters, heavy machinery, laying low at night. McKenzie is essentially monotone for the whole movie, but it’s not out of awkwardness or poor performance: her character has all the hyper-vigilance and severely compromised ability to connect with and trust other people that her father does, but by the end she’s found a home. He hasn’t.

He goes off wandering, roll credits. Leave No Trace isn’t overly sentimental or procedural, and its characters and their relationships are so well-developed and nuanced without much dialogue. It remains unresolved, like our occupation of the Middle East, and ends on an aerial shot of Foster disappearing into the woods, his daughter left behind to live a happy life with well-adjusted people. That’s as close to a storybook ending as this material can withstand, and Granik’s film joins Eye in the Sky as one of the best post-9/11 war movies.