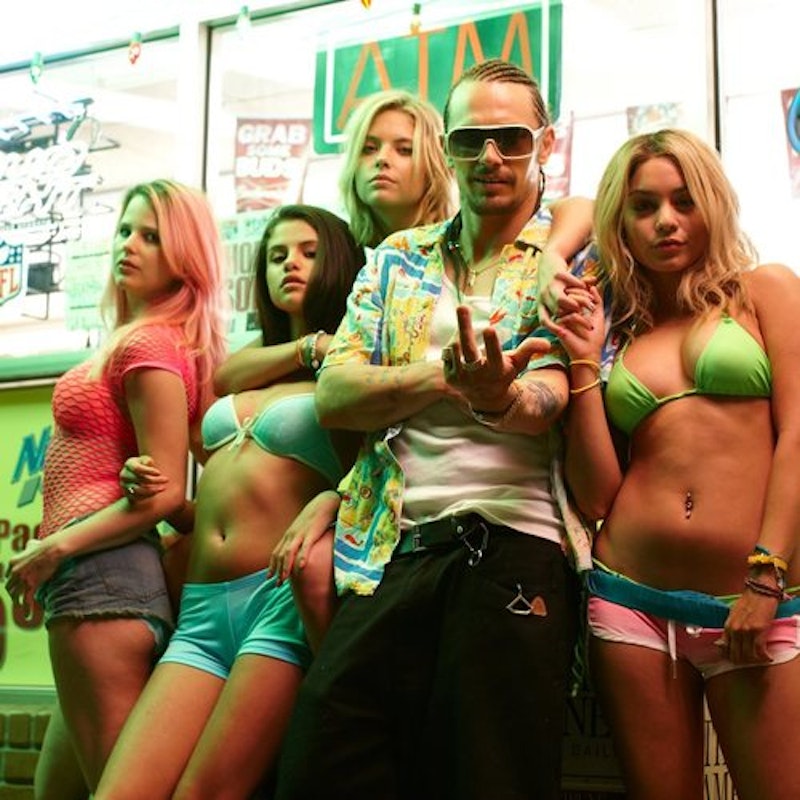 Spring Breakers follows the misadventures of four vaguely middle-American college students—Faith (Selena Gomez), Candy (Vanessa Hudgens), Brit (Ashley Benson), and Cotty (Rachel Korine)—who long to escape the familiarity of their everyday lives by trekking to St Petersburg for Spring Break. First they must overcome a funding problem, which Candy, Brit, and Cotty do by robbing a local eatery with squirt guns and sledgehammers, while the nominally more well-behaved Faith attends a sort of hip-hop-inflected prayer meeting. Arriving in Florida, the quartet enthusiastically partake in the traditional excesses of Spring Break, gleefully beering and bonging and baring themselves in a sea of pale, undulating flesh. Trouble happens when the girls are rounded up by police and told that if they do not have money to pay a fine (they don't) they will have to spend two days in county jail. They are “saved” by Alien (James Franco), a local rapper/hustler who bails them out and introduces them to his equally seamy white milieu.

Korine sets a lot of traps for viewers in Spring Breakers, perhaps the most obvious of which is Faith's ostensibly more conventional moral rectitude. This, of course, is sign-posted variously by her Christian, uh, faith, lack of participation in the vacation-facilitating robbery, and, perhaps most misleading, the crippling sense of unease that she feels around Alien and his cronies, which ultimately induces her to leave the party early. But these break down under scrutiny, and not just in the way she is grateful that her friends did “bad things” to facilitate their trip. Most telling for the movie as a whole is the devastating scene in which she tearfully explains to a smarmily attentive Alien why she insists on returning home.

The significance of this moment can hardly be overstated. After extricating the four bikini-clad girls from their legal troubles, Alien takes them to a pool hall in a predominantly black part of the city. This is decidedly unfamiliar to Faith and she therefore feels threatened. Never mind the fact that the girls are undoubtedly in less danger here than amongst their ostensible peers. The buffed-out, boozed-out, coked-out, be-jock-strapped men lurk and leer with an ominous suggestion of date rape, while the men of “the trap,” unfamiliar though they may be, mind their own business, even as Alien leads the girls through their territory. Never mind the fact that these men understand that should these girls come to any harm, the punishment would be swift and merciless.

But none of this makes the scene between Alien and Faith less threatening or affecting. One of Korine's great strengths as a filmmaker is his ability to demonstrate the instability of our constructs of reality without sanitizing his movies of their emotional impact. Faith's confrontation with Alien is made even more threatening to her because she has yet to learn how to navigate the inherent inequality of male/female relations. This is in direct contrast to Cotty, whose sexual relationship with a professor allows the girls to use his el Camino as the getaway car for their chicken shack heist. Moreover, Cotty proves adept at manipulating sexual power when she taunts a couple of thirsty spring breakers that they're “never gonna get this pussy” because they are “bitches,” thereby reversing the conventional gender balance. Faith can draw on no such experience to help her defuse Alien's tender/creepy caresses.

Consider, too, the racial dynamics articulated in this scene. That Alien is comfortable bringing the girls into this world says a lot about his ability to move freely between two distinct racial milieus. In the film's opening scene, the girls are shown in a classroom ignoring a lecture on Reconstruction and the legacy of racial inequality in America and making crude drawings in anticipation of their imminent vacation. But, as we learn later, Alien did not have the luxury of ignoring these lessons. He was the only white kid in his school and was taken under the wing of his erstwhile best friend, now hustling rival Big Archie (Gucci Mane). The contrasting portraits the film presents of Alien and Arch are especially telling. While Alien is able to navigate seamlessly between Arch's reality and the white, bourgeois world of the spring breakers, Arch is limited. This in turn is reflected in the sort of lives each hustler lives. While Alien glories in an orgy of conspicuous acquisition and consumption—“Look at my shit!” he screams to the girls as he hilariously inventories the ridiculous signs of his wealth—Arch's lifestyle reflects an ethic that is more family oriented. Indeed, in one of the film's more moving scenes, Arch is shown sitting on a sofa, baby in his arms, surrounded by family, declaring that he must put a stop to Alien's hustling because his former apprentice is taking food from his baby's mouth.

Harmony Korine certainly likes to provoke and in Spring Breakers he stretches the reversal and destabilization of power structures to the point of absurdity. Cinemagoers drawn to the movie by the prospect of attractive Disney stars behaving badly or James Franco reenacting a video by viral goofball MC Riff Raff or even the smorgasbord of boobs promised by the lurid trailer, are likely to be profoundly disappointed. But this is probably how Korine wants it. Beginning with Gummo (1997), Korine has distinguished himself by making morally ambiguous films about tricky, some might say distasteful subjects, with a narrative strategy that favors the rhythms and circular repetitions of music. Spring Breakers is nothing if not the apotheosis—to date, anyway—of Korine's art.