Harmony Korine’s Spring Breakers is boring, but its aspirations are noble. 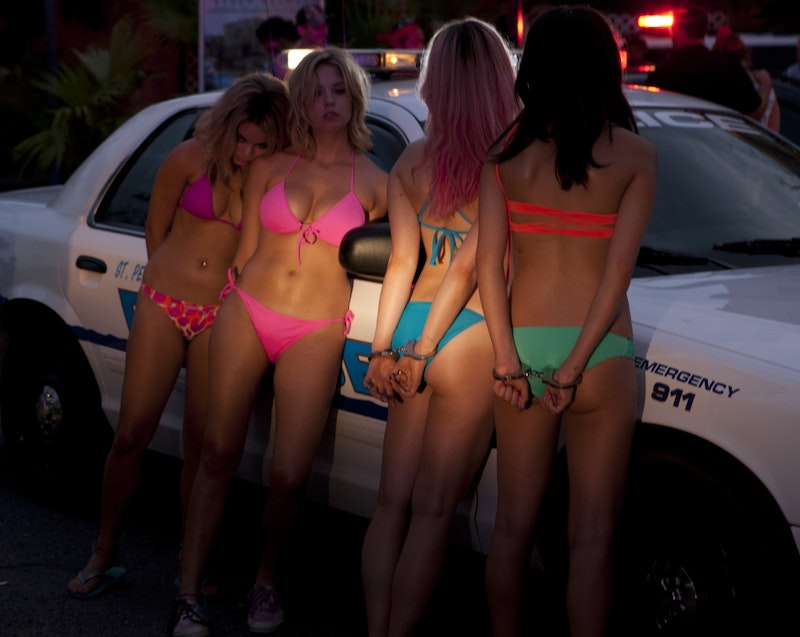 Harmony Korine’s Spring Breakers is a void, a neon black hole that lets no light in or out of its vibrant, jittery surface. The emptiness is the point: this movie is about a culture stuck on orgasm, going berserk and finding bliss between those first few highs, and chasing that feeling forever. From infancy, today’s young adults are bombarded with intense and unnatural highs like junk food, cable TV, video games, and the Internet—cocaine and Svedka-fueled bacchanalia is the next logical step to take you into your 20s. Korine is a pervert? Sexualizing barely legal Selena Gomez and Vanessa Hudgens in his own masturbatory arthouse crossover fantasy? Please! The stuff these tween idols came up with is far more sinister and bleak as far as sexuality goes. They’re appealing just as much to creepy old men as they are to young kids. At least Spring Breakers is upfront about what it’s trying to do.

The movie really resembles Terrence Malick’s The Tree of Life, which is to say it’s boring—really boring. It’s a tone piece with a thin, barely developed story that James Franco and Gucci Mane pop into more than halfway through. The opening scene is enormously promising: slow, reflective close-ups and pans of wasted, beautiful young people with golden tans spraying beer on each other and taking their tops off for the camera. Skrillex’s classic “Scary Monsters & Nice Sprites” plays loudly, sounding both triumphant and melancholic as the viewer starts to feel shame looking so intently at a teenager’s crotch in a theater full of other people. The guilt and dysphoria that inevitably follow extreme self-indulgence are what Korine is focusing on here: the disgust and disillusionment Gomez feels after being bailed out of jail by drug dealers, the crash back to reality after one of the girls is shot, the comedown from doing rails of cocaine off a preening, naked co-ed lusting for you and only you, for a limited time only.

The floaty, non-linear (i.e. stagnating) plot and pace of the movie make for a deadening first viewing, where the initial rush of its opening salvo is dulled, just like a night’s high, through repeated, extreme exposure to naked bodies, drugs, alcohol, gorgeous sunsets, beaches, and glow-sticks, until it makes us feel nothing. By the time we reach the required climactic shootout, the audience is so out of it, disconnected and disinterested in these characters as anything more than shadows on the wall, that they don’t know what to make of it. I heard from a lot of people that Spring Breakers brought out the worst in them, and by the end they began to take every excess at face value. Korine has pulled off something major by getting his movie on more than 1000 screens despite its grim prognosis for the mind preoccupied with diddling itself over and over and over. Even if it could use a cut here and there, Korine’s Spring Breakers is a bold about face when you look at most everything else it’s playing against in the multiplexes.