The Walking Dead Is Too Boring To Be That Popular 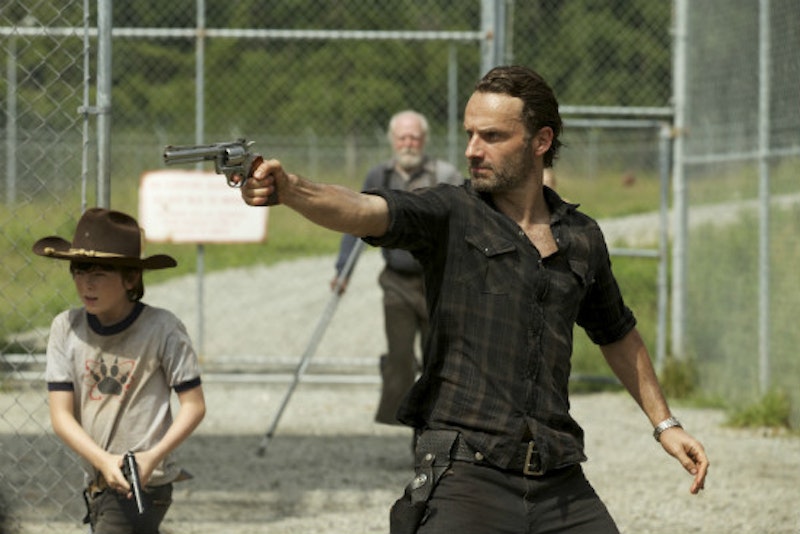 The big TV news over the weekend revolved around a ratings war (albeit not a very traditional one): Sunday night, nine p.m. pit The Walking Dead season finale against the Game of Thrones season premiere, throwing nerds everywhere into a tizzy. It's no surprise that The Walking Dead set a record high at 12.4 million viewers. The show has been breaking ratings records this season in the key 18-49 demographic, and its ads are among the most expensive for any TV drama, cable or otherwise. Of course, Game of Thrones set its own record high (4.4 million viewers), but as TorrentFreak reports, it was also illegally downloaded by more than a million viewers in the first day. "A few hours after the first torrent of the show was uploaded the OpenBitTorrent tracker reported that 163,088 people where sharing one single torrent." That too set a record. Maybe now HBO will get its shit together when it comes to packaging HBO Go, which is still exclusively for HBO cable subscribers.

Anyway. Why, exactly, The Walking Dead was drawing huge, 10+million-per-episode ratings this season is beyond me. Yes, I'm a fan, but for a show about the zombie apocalypse The Walking Dead has always been way too boring, and season three, with its long, drawn-out build up to an inevitable (and, as it turns out, thoroughly disappointing) showdown between Rick and the Governor, was no exception. The show traffics in predictability. A typical Walking Dead episode at this point is about 90 percent vague, morally-conflicted talk, and about 10 percent compelling TV. It's a bleak show, akin to Cormac McCarthy's The Road. Not since season one, when Rick and the gang broke into a nearly-abandoned CDC building and met Dr. Edwin Jenner, who suggested that this was "our extinction event" before offing himself, have we seen anyone from the government, or heard anything more about what this disease is, or how it could be stopped.

This is not the zombie apocalypse according to Michael Bay. Rather, The Walking Dead is about societal collapse; living vs. surviving. As The Governor says in the season finale, "In this life now, you kill or you die. Or you die and you kill." That line no doubt would have been more affecting had The Governor not proven himself to be a total sociopath by the end of the season, but when Carl guns down a young Woodbury hostage after the prison raid, then explains to Rick that "he couldn't take the chance," we understand the harsh moral imperative here.

I didn’t kill the walker who killed Dale, look what happened. You didn’t kill Andrew, and he came back and killed mom. You were in a room with The Governor and you let him go, and then he killed Merle. I did what I had to do. Now go. So he doesn’t kill any more of us.

Not accepting that logic certainly got Milton and Andrea killed, as both had opportunities to off The Governor in the episodes leading up to the finale, but trusted instead in a truce that was never coming. More problematic, Andrea's death at the end of the episode should have been more affecting, considering she’s one of the few remaining characters from season one. But the fact is, I don't really care that Andrea's dead, and that's not just because she was so unlikable for most of the season. For what's basically a character drama, The Walking Dead has never been very good with writing characters. Even after three seasons, I still didn't really know anything about Andrea, which is unfortunately true of most of the characters on the show. And the fact that The Governor escaped—run off with two of his henchmen to God knows where, only to come back God knows when— doesn't help my expectations for next season. Rick and co. have found some relative safety, but I doubt it will last.