The documentary A Civil Remedy suggests they're all the same… and that maybe they aren't. 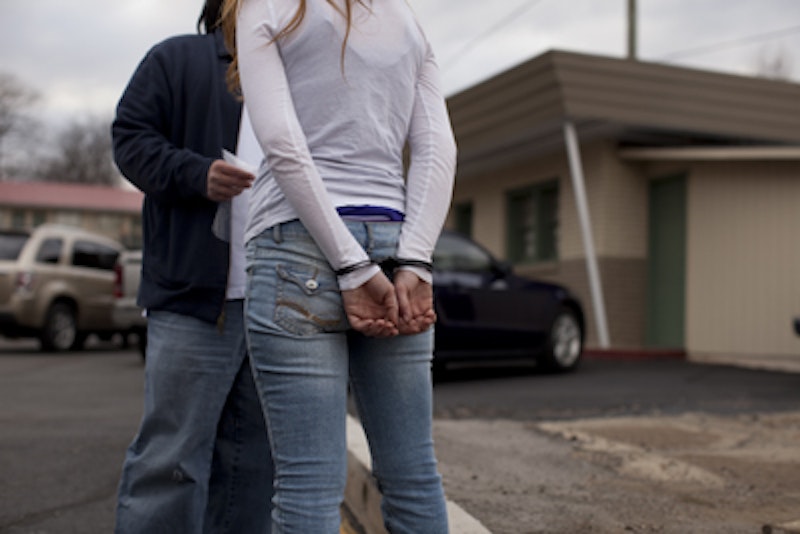 The new short documentary A Civil Remedy is a 20-minute brief for the argument that prostitution is a nightmare of exploitation and violence. As such, it is both effective and thoroughly horrifying.The film focuses on the experiences of a woman called "Danielle." When she was 17, Danielle came to Boston for school to study sociology. She ended up dating an older man who started to abuse her. He eventually terrorized her into becoming a prostitute for two years. "He was capable of anything," she said. "I was consistently numb." She says that after escaping, the first time she shared her story was in a rape crisis group. She was reluctant to tell the other women what had happened, worrying that her account might "make the other women feel like their stories were less important." Most of them had only been raped once, which is surely a horrible enough thing to happen to anyone. Danielle, though, had been raped repeatedly for two years.

Again, A Civil Remedy is centered on Danielle's story. But it also has particular theoretical arguments to make about prostitution. First, it suggests that women who sell sex like Danielle should be seen not as prostitutes, but as victims of human trafficking. The term "human trafficking" is commonly thought of as referring to people who have been captured in one country and then shipped across borders as laborers. Trafficking has been heavily politicized in recent years, and there’s been a lot of controversy about how prevalent it is, or whether it’s really the problem or phenomena that advocates sometimes claim. Be that as it may, it's clear that the film hopes that the term can be broadened in popular consciousness to apply not just internationally, but to any woman forced into prostitution. By changes terminology, it hopes to change attitudes and laws around prostitution, shifting the focus of enforcement from the women to the pimps and johns who exploit them.

This is, in turn, where the idea of  "a civil remedy" comes in.  The film talks to several experts who argue that, in addition to criminal penalties against kidnappers and abusers like Danielle's pimps, the law should allow for civil suits.  Women who have been trafficked should be able to sue their abusers for restitution — including lost wages, lost schooling, psychiatric care, and pain and suffering.   Through civil remedies, women who have been trafficked can not only see justice done, but can also get at least some of the resources they need to put their lives back together.

The film is very convincing in its argument that there are significant numbers of women like Danielle, who have been coerced into prostitution. It also is persuasive when it argues that these women should not be treated like criminals, but as victims who need help and legal recourse. The problem is that it wants us to believe that all prostitutes (and all sex workers?) can be characterized in this way. Which simply isn't true.

Alicia Foley, the founder of the Boston Initiative to Advance Human Rights, talks in the film about the importance of listening to women's stories as a way of acknowledging their worth as human beings—and, implicitly, as a guide to activism. She makes a good case… which is all the more reason to listen to stories that don't dovetail with Danielle's, as well as to those that do. Because there are a lot of prostitutes who do not see themselves as victims, who did not enter the profession because of abuse, and who, mostly, see their jobs as jobs, not as rape. For example, Robin Hustle's regular column at Jezebel discusses the pros and cons of working as a prostitute in the matter-of-fact way you'd discuss any freelancing gig. Brooke Magnanti, who also worked as a prostitute, strongly rejects the suggestion that she was trafficked. Like Hustle, she doesn't see herself as an exploited victim. Prostitution for her was a reasonably pleasant way to make some money, not a nightmare.

So are Hustle and Magnanti's experiences abnormal? Or is Danielle's experience abnormal? Conversations about prostitution often disintegrate into a discussion of whose lives are more real or representative, a discussion that I think is unhelpful. It’s pretty clear there are some women who are forced into sexual slavery like Danielle. And then, there are other women who choose prostitution as a career because they find it congenial. In the middle there are probably many women who see prostitution not as ideal, but as their current best option, in much the same way that workers in other professions choose their jobs not necessarily because they love them, but because they need to work somewhere, and the particular somewhere they're working is the best choice they have at the moment.

The goal, then, shouldn't be to make Danielle shut up, nor to make Hustle and Magnanti shut up. Rather, the goal should be to listen to both their stories, and learn from them, rather than trying to dismiss either one. Admitting that Danielle is a victim who needs protection shouldn't mean that we have to treat Hustle or Magnanti as deluded. Similarly, recognizing that Magnanti and Hustle are not victims doesn't mean we have to discard or ignore what happened to Danielle. There is rampant exploitation in many sectors of the garment industry, but that doesn't mean that all those who make clothes are necessarily exploited or miserable. You've got to look at matters case by case.

Oddly, A Civil Remedy offers a helpful way forward almost despite itself. Allowing trafficked women to sue their assailants in a civil rather than a criminal context would allow women to define their own experiences as prostitutes. Danielle, a victim of kidnapping and abuse, can sue her abusers. People like Hustle and Magnanti, who were not abused, wouldn't sue anybody. The criminal pimps would be punished; Magnanti and Hustle's johns who engaged in consenting relations with other consenting adults would be left alone.

Kidnapping and rape are still absolutely criminal offenses; what happened to Danielle can't just be left to civil court. But civil suits can be, at least, a way to start to think about the fact that people working in the sex trade—like workers in any field—have different experiences. The best way to understand those experiences is to respect the people involved, even if, or especially if, they sometimes contradict each other. A Civil Remedy is itself only able to listen to a single story. But its insights might help us listen to more.

—I was provided with a preview of A Civil Remedy by Chicago Filmmakers, which is screening the film March 30 in conjunction with the documentary It's a Girl.