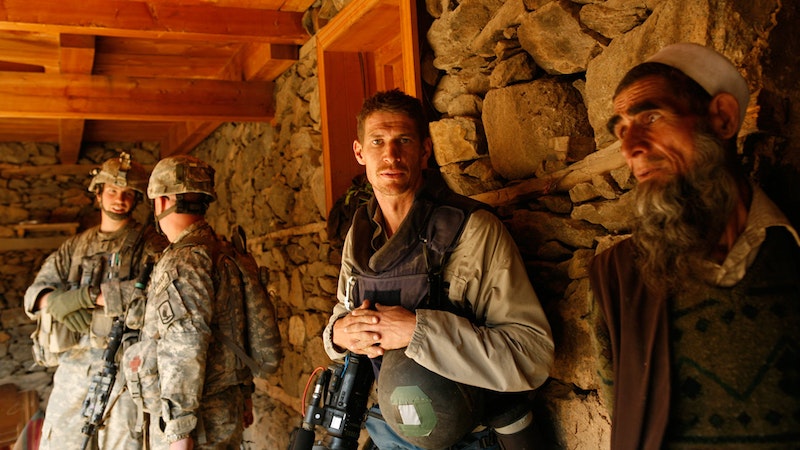 Few people deserve to have movies made about their lives and imagined struggles. Rarely in a biopic do you get the sense that the subject is pure, a martyr missing any of the greedy, petty, selfish, and mean parts that make so many people unremarkable. Which Way is the Front Line From Here: The Life & Story of Tim Hetherington is a powerful and moving memorial to a man whose work as a war photo/video journalist was enormously compelling and took balls of steel to undertake. Hetherington was a tall, handsome white guy from England with big ears and a goofy, comforting face. From the documentary’s opening sequence— Hetherington and director Sebastian Junger trying to nail an explanation of what Tim’s work means to him without sounding totally trite—there is a magnetism about the man that compels you to care about and want to get to know him.

Even the jaded and bored will love this film, because it’s extremely well-executed, engaging, concise and knows its place (the run time a brief 78 minutes), and it hits spots that most personal documentaries just barely miss. These sorts of movies usually get bogged down in self-indulgence and decisions driven by emotional wants rather than with the viewer in mind. Interview subjects ramble on, the Ken Burns effect is used liberally, and the filmmakers lose the plot, drunk on their own voice. Seventy-eight minutes is barely considered a feature film, yet Which Way is the Front Line From Here’s brevity and punch put into perspective how baggy most movies are. Hetherington’s work is the main focus, with footage and photographs he shot in places like Monrovia, Afghanistan, Liberia, and Libya throughout the last decade of his life. His work is stunning: his portraiture and candids of children in war zones, teenage soldiers, fisherman, wet nurses, medics, and rebels jump out from the screen at you. His work radiates, corny as it may sound, a pure, comforting sense of empathy and love.

We see how easy it is for Hetherington to interact with and even befriend the subjects he documents, people in foreign countries who speak entirely different languages and live vastly different lives. His affability is transcendent—it makes you long for those kind of social skills, because Hetherington really comes across as saintly, in the way he immerses himself in impossible situations to better understand those who serve, who fight, who endure. Very few people have the guts and the love to live in the foothills of Afghanistan, shooting film and communicating to everyone else that these heroes suffer and their struggle is not at all well documented. At one point, he puts himself between the barrel of a gun and a doctor accused of being a spy for the Gaddafi regime. So often, the sort of people that fit this mold—the over-achievement junkie who did charity work in Africa and ran every bake sale—there’s malevolence underneath all the forced cheer and astro-kindness. Maybe you’d have to be an asshole to think that. Hetherington’s story and his photographic work are inspiring in their purity of heart, vision, and bravery.

—Which Way is the Front Line from Here: The Life & Story of Tim Hetherington airs April 18, 2013 on HBO