All American War Films Are Imperialist

The Girl from Hanoi shows just how limited Hollywood is. 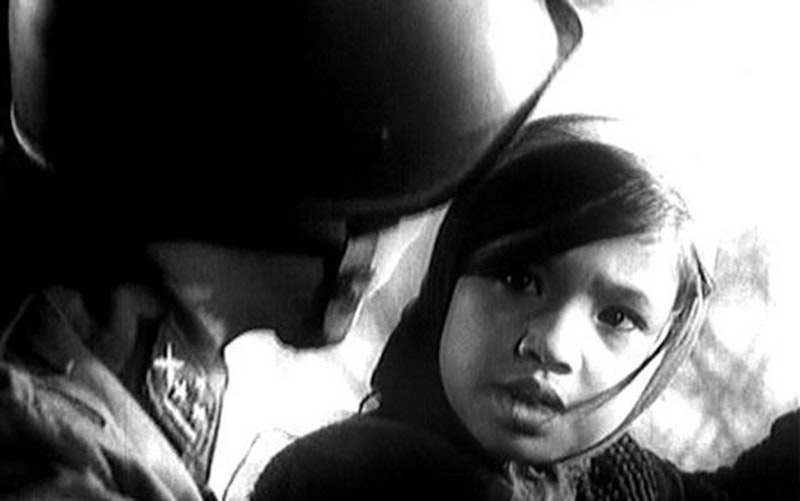 This is the last in a series on latter-day U.S. colonial wars. The previous installment, on Apocalypse Now, is here.

The Girl From Hanoi is, transparently, a propaganda film. Released in 1975 while the war was still underway in Vietnam, its credits thank the Vietnamese military, and concludes with a recording of Ho Chi Minh praising independence and freedom. Director Hải Ninh's enthusiastic partisanship can be grating—especially in the tedious scenes of earnest Vietnamese soldiers intoning coordinates as they prepare to fire anti-aircraft weapons. But the clear bias highlights the unspoken bias of most American colonial war films—a bias so universal in Hollywood as to have become virtually invisible through lack of contrast.

Girl From Hanoi has a simple plot. A young girl, Ha Ngoc (Lan Huong Nguyen) lives a happy life in Hanoi with her mother, father and sister until the war. Her father has to go away to serve in an artillery unit, and then her mother and sister are killed when Americans bomb the local kindergarten building. Ngoc tries to find her father, and is taken under the wing of another artilleryman (Thé Anh). She tells her story in flashback, eventually revealing that her mother died a hero saving other kindergartners, while her sister survived the bombing. The artilleryman promises to look after her until her father returns… and the film ends with scenes of brave Vietnamese soldiers defending the homeland.

There are some obvious elisions in The Girl of Hanoi. Watching the film, you wouldn't know that the war was a civil conflict. As in Hollywood movies, the battle seems to be fought entirely between Vietnamese on one side and Americans on the other. The vast majority of troops opposing Ho Chi Minh were South Vietnamese, but the existence of ideological divisions within the Vietnamese people is inconvenient and ignored.

But The Girl From Hanoi also includes many details that have been systematically excluded from films like Jacob's Ladder, Apocalypse Now, Full Metal Jacket, and almost every American Vietnam war film. Specifically, director Hải Ninh acknowledges that Vietnamese people exist in substantial numbers, and that they speak.

As Linh Dinh writes at The Guardian, American war films generally present Vietnam as a jungle. The Vietnamese are portrayed as primitives—using spears in Apocalypse Now—or as incomprehensible and untrustworthy. In Full Metal Jacket, the only Vietnamese we see are prostitutes, pimps, and one vicious sniper, who only speaks to beg for death. In MASH, where the Korean War is a not especially buried stand-in for Vietnam, the one Korean character is a servant. In Jacob's Ladder, the twist ending is that the Americans were not fighting the Vietnamese at all, but shot each other. Via the logic of imperialism, Vietnam War films depopulate Vietnam of the Vietnamese, the better to highlight the heroism, tragedy, and ambivalence of Americans who take up all the narrative and cinematic space in Southeast Asia.

The Girl From Hanoi, in contrast, is centered on Vietnamese people. Perhaps more importantly, it’s centered on Vietnamese people interacting with and caring for each other. The central theme of the film is not the nightmare of war nor the traumatizing effect of violence, as in most American films. Instead, The Girl From Hanoi is about self-sacrifice, and community solidarity. Ha Ngoc's mother dies saving other people's children from a destroyed school; Ha Ngoc's sister is saved repeatedly by a woman who was passing by when bombs fell. Ha Ngoc, when she can't find her father, is essentially adopted by another artillery officer. And one of the film's most affecting scenes is a brief idyll in which Ha Ngoc, being cared for by acquaintances, plays her violin to help a baby fall asleep despite the American bomb blasts in the distance.

In Apocalypse Now, the Vietnamese are an atavistic mass, chopping up cows in primitive rituals and bowing down before whatever American happens to pass by. In The Girl From Hanoi, when a ragged line of POW's pass by, the gathered Vietnamese don't bow. They all but spit on them, not out of some sort of primal hatred, but because American bombs have destroyed their homes and killed their children. The Vietnamese don't live back in the bush; they live in cities, which are equipped with air raid sirens and shelters. Linh Dinh points out that Vietnam in 1975 was a densely populous and modern country. American films never show this, because that would portray the Vietnamese as civilized equals.

The Girl From Hanoi is not a great movie. It's short and lacks both scope and ambition. There are no sweeping set pieces, like the Ride of the Valkyries scene in Apocalypse Now, and no virtuoso acting turns, a la the sergeant in Full Metal Jacket.  The special effects are rudimentary compared to something like Predator or Rambo. Scenes of battle are dim and unconvincing. American fighter jets are shot down offscreen, because the film doesn't have the resources to visualize them. Most of all, Girl From Hanoi lacks the moral and political ambiguity that indicates serious Hollywood films, like Zero Dark Thirty. Director Ninh doesn't wonder whether the war is justified; he doesn't ask whether his artillery officer has lost his soul. Fighting for Vietnamese independence is a worthy cause; all the Vietnamese people are worthy people. Questions about morality and politics are not posed, much less answered.

Despite these limitations, The Girl From Hanoi does something that none of the big budget, critically acclaimed American films about the war have done. It treats Vietnamese people as people, with aspirations, loves, and grief that are worth respecting and recording. It puts colonized people at the center of their own stories, rather than treating them as appendages to American psychodrama.

That almost no Hollywood film makes an effort to tell the story of the war from the perspective of the Vietnamese is a quiet, bleak indictment. Whether Americans make pro-war films or anti-war films is largely beside the point if we aren't able to imagine the humanity of the people on whose countries our bombs fall. The Girl from Hanoi, for all its faults, shows Americans what an anti-imperial film looks like. Hollywood hasn't made one yet.